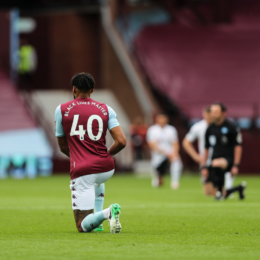 Football players in England resumed their interrupted season in front of empty stands this month. Before the first game, each player, in addition to their name, squad number, and advertising slogans (including the now-sainted NHS or National Health Service symbol), wore the slogan “Black Lives Matter” on the back of their shirts, and the Football Association has announced that this will continue to be the case for all teams and fixtures, at least for the time being. More importantly, they all knelt on one knee (we must refuse to use the stupid phrase “take a knee,” as we have been instructed to do) as some kind of grotesque symbol of respect for something as yet not clearly defined, but which does not bode well for the future of the West.

Although the gesture is fraudulently made to look voluntary, it is no such thing. If any one player remained standing, he would certainly never play for his team again, and would most likely not play football professionally again. When the crowds are allowed to return to the spectacle, many of the white fans, in the secrecy of their genuine beliefs, will not want or applaud this ritual, living as many of them do in areas made all the more unpleasant by black culture. But their point of view does not count; except against them, were it ever to become known.

The sports world in the UK has fallen in line with the corporate world, the entertainment industry, the media, the political class, and the comically-named “forces of law and order” in genuflecting before their new cultural masters. As with the ridiculous Thursday night clapathons, during which British people came out of their homes to applaud NHS workers for doing their jobs, these may not look mandatory, but failure to comply risks at the very least social ostracism. A Russian friend now living in England tells me she did not take part in this absurd mass hysteria as she could remember, as a little girl, being forced to clap enthusiastically as members of the Politburo took their seats.

One of the players at the center of the new activism, Manchester United’s Raheem Sterling, supplemented his kneeling position with a black power salute. This is what politicians, obsessed as they are with the semiotics of gesture, would call “good optics.” MSM journalists have been attempting to crash Wikipedia as they look up the famous first sporting incidence of the clenched fist raised in aggressive defiance by black sportsmen against what is perceived to be white racism.

At the Olympic Games of 1968, in Mexico City, two American athletes made history by making the salute during a medal ceremony, and the optics of that image are far more powerful than Sterling’s effeminate little air-push. Take a look at the famous photograph of the podium, taken by sports snapper John Dominis. By a trick of perspective, and reduced to the level of pure semiotics, the right- and left-handed, black-gloved salutes of gold-medal-winning US athlete Tommie Smith and bronze winner John Carlos’s arms seem to form a parenthesis in the middle of which is a white man, Australia’s Peter Norman, who won silver that day. Within the limits of this parenthesis is where the UK currently and uneasily resides. 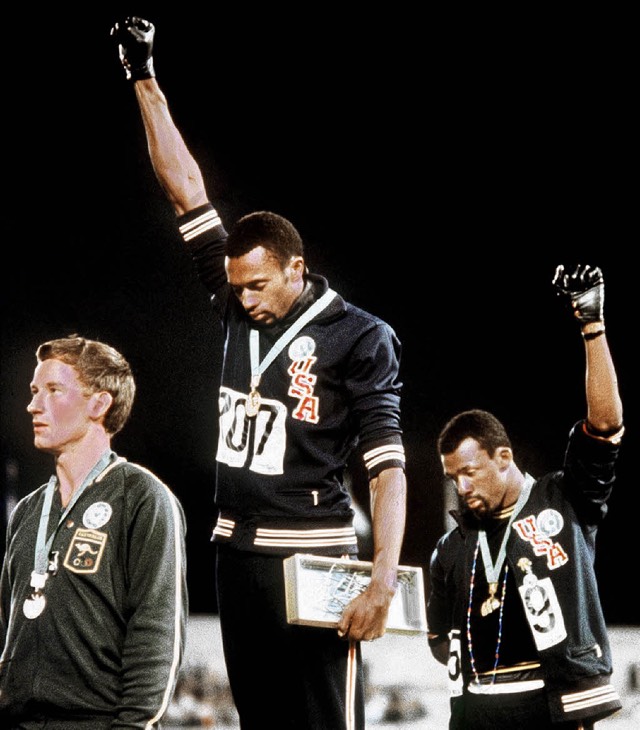 As for kneeling, this represents the first installment of a fee to be exacted from white people, a toll to be paid. Along with their handlers in the establishment and its provisional wing at street level in Antifa, BLM is forcing the White British to their knees in many ways. The neo-Maoist destruction of offending statues includes Churchill crated up like a washer-dryer and the destruction or removal of statues of men who actually helped dismantle the apparatus of slavery.

In addition to this gormless iconoclasm, the “decolonization” of university curricula and national libraries has begun, and is unlikely to stop at the removal of copies of Conrad’s The Nigger of the Narcissus. Television is being sanitized, with a cull of any programs featuring racial stereotypes or the much-feared “blackface.” Consumer brands are panicking and re-designing packaging which may offend. And, of course, celebrities are falling over themselves to protect their own brands by denouncing whitey. Anti-racism is a state-mandated ukase, and we are seeing the truth of Faye’s pronouncement in Why We Fight:

Touchstone of the self-righteous, anti-racism is the most advanced expression of postmodern totalitarian ideology.

So white culture is currently facing an offensive on all fronts, and the lack of resistance implies that ethnomasochism has now become so ingrained in the British people, at least those allowed a voice, that the war is lost. But they are not alone. The other big losers, in the UK as well as across Europe, are Islamists. They have watched BLM go from a street gang to a brand in just over a week, garnering more media attention and high-end PR in ten days than the Muslim Brotherhood of Great Britain have managed in ten years. After all that effort, all those children blown up in Manchester, all the random and savage street attacks and murders, all those underage girls raped without the bothersome attention of the police, all the fast-tracked planning permission for endless mosques, along with the speaker systems to let everyone hear the unpleasant crowing of the adhan, and the infidels are kneeling to black men? This was not supposed to happen. One wonders whether Mohammedans might be planning a spectacle to remind everyone that BLM is not the only brand name in town.

At the moment, however, the black man’s star is in the ascendant, although Britain had its political Cassandra as long ago as the 1960s and, as with the forlorn priestess, failed to heed the warning. British parliamentarian Enoch Powell — or rather one of his constituents — warned the country of the effects of black immigration in a speech in 1968 which the ignorant still refer to as the “rivers of blood speech.” The constituent was, in Powell’s words, “a middle-aged, quite ordinary working man employed in one of our nationalized industries.” Powell quotes the gentleman in question:

If I had the money to go, I wouldn’t stay in this country. . . I have three children [and] I shan’t be satisfied till I have seen them all settled overseas. In this country in 15 or 20 years’ time the black man will have the whip hand over the white man.

Now, the effective response to the changing of the whip hand is not white supremacy, either as it does actually exist or as it has been confected as an imaginary enemy by the Left across the West. To return to football, any white supremacist who has ever attended a British football match will have had cause to question his core beliefs. There are decent, hard-working, ordinary white folk simply attending a sporting event, of course. But there is also a hard core of Untermensch, terrible throwbacks to a Hobbesian era when life was nasty, brutish, and short, as good a description as any for some of the men who watch football. There is no less edifying sight than to watch an opposition player go close after a dazzling piece of skill, and to see the grimacing, leering, baying opposing fans making the masturbatory gesture known as the “wanker sign.” They have no sporting blood, but are just a pack of vile monstrosities who shame the genetic pool they oozed from. If anyone was considering a white ethnostate — and Hungary’s PM Viktor Orbán is certainly making overtures — a lot of white British football supporters could be considered for menial labor at best.

But no white sports fan deserves to see his heroes kneeling in supplication to a new gang boss. Football has, paradoxically, done more for race relations than a thousand government initiatives. The most diverse employer in the UK, with the possible exception of the NHS, the English Premiership is a long way from the barracking and monkey noises that greeted one of its first black players, West Ham’s Clyde Best, in 1969, when the Premiership was the old First Division.

But BLM and their lapdogs have no interest in interracial solidarity. They wish merely to have the whip hand. Perhaps it is better, as Powell’s constituent suggested, to settle overseas.