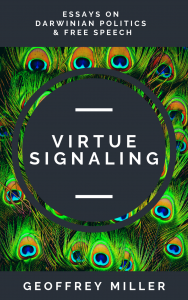 Geoffrey Miller is an American evolutionary psychologist with a position at the University of New Mexico. His most important book so far remains his first, The Mating Mind (2000), a study of sexual selection. This concept was discussed at some length by Darwin, the full title of whose second major work was The Descent of Man and Selection in Relation to Sex. Yet for a very long time this alternate form of selection attracted much less attention than the theory of natural selection set forth in The Origin of Species: the tendency for mutations which make survival more probable to spread within a breeding population.

The classic example of sexual selection remains the peacock’s tail: a large, clumsy, energy-consuming ornament which does nothing to promote an individual peacock’s survival in the wild. It exists because peahens prefer to mate with peacocks who display the largest and most colorful tails. Such display is called sexual signaling.

Not all examples of sexual selection are as clear as the peacock’s tail, and with many particular traits it can be difficult to determine whether sexual or natural selection or some combination of the two has been at work. The Mating Mind was Miller’s effort to revive interest in sexual selection as an explanatory model and apply it to new domains. Reading it several years ago put me in mind of an observation I once came across that every theory must be driven as far as possible, even to the point of absurdity, if it is to reveal its full explanatory power. The author tries to account for a lot—the entire domain of language and culture—by means of sexual selection, and the chances are against all of his proposals standing up to future research. But even if they do not, the book still makes a valuable contribution by attempting to apply and extend a Darwinian insight which was neglected for a long time.

Many accounts of sexual selection are incomplete, because they do not consider why female animals respond to seemingly absurd signals such as the peacock’s tail. Helen Fisher, e.g., leaves it at saying that big, colorful tails happen to excite peahen brains. But must not the peahen brain have evolved in this way for some reason?

In 1975, the Israeli biologist Amotz Zahavi proposed a theory of biological handicaps to explain such costly signals. The basic idea is—to stick with the peacock example—that having a large, fancy tail proves the peacock’s good health and fitness precisely because it is so expensive (in terms of energy) to produce. In other words, it is an effective sexual/fitness signal for the same reason it is so inefficient from the perspective of mere survival (i.e., natural selection).

Handicaps can only work if they’re inefficient (imposing large fitness costs on other domains of survival and reproduction), if they are extremely unreliable (breaking down readily if an individual is sick, starving, injured, or depressed), and if they are species-typical only in design but not in magnitude (otherwise they could not signal individual differences).

The kinds of signaling produced by natural selection tend to have the opposite qualities of cheapness, reliability, and efficiency.

As Miller points out, the handicap principle was prefigured by Thorsten Veblen’s concept of conspicuous consumption: “the only reliable, unfakeable way to show that you’re rich is to acquire goods and services that only the rich can afford.” I also recall reading once of a besieged city which convinced the besiegers to give up by catapulting hundreds of loaves of bread over the ramparts. So the idea is not exactly new, but has only gradually won acceptance among evolutionary biologists.

What, then, is the virtue-signaling we suddenly began to hear so much about in the past few years? As Miller acknowledges, it is merely a new name for a very old thing:

We are humans, and humans love to show off our moral virtues, ethical principles, religious convictions, political attitudes, and lifestyle choices to other humans. We have virtue signaled ever since prehistoric big-game hunters shared meat with the hungry folks in their clan. Our descendants will continue to virtue signal to each other in Mars colonies.

They often canceled out each other’s votes, but they took for granted that every American has a duty to vote in an informed and rational way. Despite their differing views on many issues, they cooperated effectively on shared interests, discussing values, realities, strategies, and tactics in ways that my brother and I could witness.

On the other hand, they had no political bumper stickers on their cars and knew better than to quarrel over politics with relatives at Thanksgiving dinner. In short, they were interested in effectiveness, not signaling.

Arriving at Columbia University as an undergraduate, Miller ran into just the opposite: students who would denounce Ronald Reagan vehemently and at every opportunity, yet could not be bothered to go out and vote for his opponent Walter Mondale. These young people covered their backpacks with buttons and their dorm rooms with posters advertising their views on everything under the political sun, but did not undertake anything practical to further the causes they claimed to believe in. They were as vocal about their opinions as they were indifferent to results.

At this time, South Africa was still missing out on the blessings of ANC rule, so in the spring of 1985, Columbia students organized a massive, showy protest supposedly aimed at getting the University to divest from companies doing business in that country. It involved blaring out a song called “Free Nelson Mandela” on auto-repeat all night long right under Miller’s 3rd-floor dorm room.

I lost enough sleep that I almost failed my organic chemistry class [he recalls]. The campus conservative newspaper ran a cartoon depicting the protest as an annual springtime mating ritual, with Dionysian revels punctuated by political sloganeering about this year’s arbitrary cause.

On first glance, Miller found the cartoon tasteless and patronizing, but soon everybody he knew was dating someone first encountered at the sit-in. Might the satirists have gotten at the literal truth? The protest did little to benefit the Zulus, but the romantic relationships which began there—mostly between white, middle-class American kids—lasted in some cases for years. Interpreting public demonstrations of political belief as a courtship display risks trivializing political discourse, as Miller acknowledges; but then, most student protests are fairly trivial.

Because mating is a social game in which the attractiveness of a behavior depends on how many other people are already producing the behavior, political ideology evolves under the unstable dynamics of game theory. This explains why an entire student body can suddenly act as if they care deeply about the political fate of a country they ignored the year before. The courtship arena simply shifted, but once a sufficient number of students decided that attitudes toward apartheid were the acid test for whether one’s heart was in the right place, it became impossible for anyone to be apathetic.

If memory serves, “homelessness” also emerged as the big issue for part of the 1980s before fading as quickly as the divestment movement.

Later on, as an academic, Miller and a colleague studied political signaling in the lives of students at Stanford:

They may have solved the mystery of why young men trend more “conservative” than young women.

Miller also learned through personal experience that being an evolutionist imposes a sexual handicap when attempting to date female academics (probably his first mistake right there):

These brilliant and otherwise open-minded women showed a visceral disgust at evolutionary reasoning applied in any way to the study of human nature. They assumed evolutionary psychology was morally equivalent to Nazi eugenics. I learned that if I didn’t signal my defense of the Blank Slate doctrine, nothing else I did counted for anything.

Women, instinctively concerned with their reputations, are everywhere the enforcers of society’s standards. More particularly, young—and therefore sexually desirable—women lack or (at best) have not yet developed the ability to think critically about what they have been taught. In an ultramontanist Catholic society, therefore, the girls are all ultramontanist Catholics; in a cultural Marxist society, they are cultural Marxists. In Nineteen Eighty-Four, Orwell notes that young women are the most enthusiastic supporters of Ingsoc. To give the devil his due, this means there is some truth to left-wing mockery of nationalists as sexually frustrated young men; but as Miller points out, most successful revolutions have been the work of sexually frustrated young men. Once successful, they do not remain frustrated for long.

The reason “virtue signaling” has become a term of mockery, obviously, is that it tends to be extremely superficial and often hypocritical. The ubiquity of sanctimonious cheap talk is what first repelled this writer about the political left as a young man. But not all signaling behavior is cheap; the peacock’s tail takes a lot of energy to produce. Miller offers as examples of more reliable, hard to fake virtue signaling “volunteering for months on political campaigns, making large, verifiable donations to causes, or giving up a lucrative medical practice to work for Doctors Without Borders in Haiti.” (He tends to assume moral behavior must be altruistic; I disagree, but that is a subject for another essay.) Miller warns us not to despise such costly “virtue signaling” because it “is the best foundation for human morality toward strangers that we could reasonably expect from a process as blind as evolution.” He mentions that much romantic comedy involves gradual revelation of character through unfakeable signaling elicited by the plot. One only wishes those Columbia coeds had had as much sense as peahens, and insisted on more substantial signals than stated devotion to the liberal cause du jour.

Most of this review has focused on the first two essays in the collection, but the book offers much else. The central piece is a 61-page theoretical paper entitled “Sexual Selection for Moral Virtues,” to which it would be impossible to do justice here.

Also of interest is an unconventional critique of campus speech codes on the basis of “neurological diversity.” The point is that many of the most brilliant academic minds belong to neurologically atypical men who fall somewhere on the autism spectrum; they are systematizers, not empathizers. Cultural Marxist commissars operate on the assumption that everyone is capable of their own exquisite sensitivity to “microaggressions.” In fact, science nerds with Asperger’s Syndrome could never achieve this even if they wanted to. There even exists a questionnaire for identifying such people: they are the ones who agree with statements such as “It is hard for me to see why some things upset people so much,” and “I can’t always see why someone should have felt offended by a remark.”

Miller points out that people with mental disorders such as Asperger’s qualify as “disabled” under the 1990 Americans with Disabilities Act. This would give them grounds for a “disparate impact” lawsuit against speech codes which are formally neutral yet harder for them to follow than other people. Of course, my own preferred solution would be to kick the speech code enforcers out of the universities and sow the ground with salt behind them, then proceed in the same spirit with both disparate impact and ADA. But perhaps under present circumstances Miller’s strategy would be more practical.