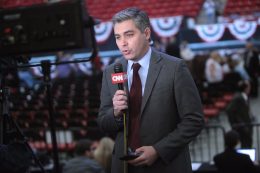 After President Trump’s speech on Friday, Jim Acosta, the “poisonous moron” as Tucker Carlson calls him, announced it xenophobic for President Trump to state that COVID-19 came from China. Acosta was on Chris (don’t call me Frodo, you cracker) Cuomo’s show at CNN’s anti-Trump headquarters when he made the statement. Cuomo, not to be out-dumbed by other shows, allowed Acosta to salivate on with: “The other thing, Chris, that I think we should point out, at one point during the address the president referred to the Coronavirus as a quote, ‘foreign virus.’”

Well now, partner, hold on. That won’t do.

But two months ago, Acosta and most other palavering lickspittles on CNN were describing the illness as “Wuhan coronavirus.” They also reported that the virus originated in a public wild animal food market in Wuhan, China. Later, they reported that the outbreak may have originated in a scientific research laboratory, again in Wuhan, based on a draft research paper published in China but since mysteriously taken down.

So, it was acceptable for Acosta and other reporters at CNN to give a certain name to a disease until Trump used the same term. That made the term unacceptable.

By the way, most of the antibiotics prescribed for Americans come from — you guessed it — China, which has threatened to limit or curtail exporting. Think about that the next time your pharmacist tells you that the antibiotic your doctor prescribed for your strep throat infection is not available. Might the Chinese cut off the supply of needed antibiotics? I don’t know, but I do know that the Communist Party of China is trying to blame the virus on America. Lijian Zhao is a spokesman for China’s foreign ministry, who said it “might be U.S. army who brought the epidemic to Wuhan.”

2/2 CDC was caught on the spot. When did patient zero begin in US? How many people are infected? What are the names of the hospitals? It might be US army who brought the epidemic to Wuhan. Be transparent! Make public your data! US owe us an explanation! pic.twitter.com/vYNZRFPWo3

I guess that was when army Lieutenant Milo Minderbender was setting up the wild bat cages in the fresh food market in the Wuhan all-night grocery.

The next day Joe Biden (the dwarf called “Sleepy” from Snow White), said that “labeling COVID-19 a ‘foreign virus’ does not displace accountability for the misjudgments that have taken thus far by the Trump administration.” Wow! He correctly pronounced four words with more than two syllables in the same sentence.

The Atlantic magazine, in a departure from their usual long-winded philippics, published a short essay with the reproachful title of “Why Trump Intentionally Misnames the Coronavirus.” The poorly edited essay’s author, Ben Zimmer, wrote:

“This is the most aggressive and comprehensive effort to confront a foreign virus in modern history,” Trump said, in words that betrayed the isolationist leanings of his chief speechwriter, Stephen Miller. The speech took a typically Miller-esque approach to the coronavirus pandemic: Blame foreigners, and [sic] close up [sic] U.S. borders.

In other words, we must not let our “isolationist leanings” get in the way of providing a clear path for the exponential spread of a deadly epidemic among our own people. Zimmer infers a lot of libtard paranoia from a single sentence that otherwise is factually correct. The effort by the Trump administration (even conceding a late response) is the US’s best endeavor yet. And the disease was, from all the evidence adduced so far, created in a foreign country: China.

Zimmer relies for support of his weakly derived thesis not on science or epidemiology, but on intersectional pre-cursor harpy Susan Sontag, who fabricated that “there is a link between imagining disease and imagining foreignness.”

So, Zimmer concludes that Trump and speechwriter Miller have devised a “calculus” to place blame back on the Chinese who are currently blaming the US. In Zimmer’s third grade arithmetic, “foreign = bad” because “Trump = bad.” And if it was an American domestically generated coronavirus, then “domestic = good” because “Trump = bad.”

If, on the other hand, when the news of the outbreak in China was first learned, Trump had the political will to close the entire US border, a better result might have ensued. Instead, Trump offered the Chinese a contingent of US doctors and epidemiologists to assist their efforts, whatever that was. The Chinese declined.

The MSM doesn’t say much about the rate of infection and death in other counties apart from Italy. What about in countries that did take immediate, and in retrospect, effective action? Putin in Russia sealed off the entire border between Russia and China in January. That’s more than 2,670 miles. Putin knew that Russia would suffer a big economic hit because of a large drop in demand for Russian exports and Chinese tourism in Russia but that it would be temporally limited.

There were no cases of coronavirus at the time of the January closure recorded in Russia. But Mikhail Mishustin, Russia’s prime minister said, “Nevertheless, we must do everything we can to protect our people.” As of March 13, there have been 45 cases reported with no deaths. [1]

There’s an interesting cultural value to ponder implicit in Mishustin’s pronouncement. Does the US have a “people” who are worthy of protection? If so, then who are they?

But in the US the thought of travel restrictions and closing the borders sent a lot of people into apoplexy. U.S. travel restrictions implemented in recent days to keep a fast-moving virus that has crippled much of China from spreading across America won’t work, a top epidemiologist told U.S. lawmakers in February. “I have never seen instances where that has worked when we are talking about a virus at this scale,” epidemiologist Jennifer Nuzzo, a senior scholar at Johns Hopkins University’s Center for Health Security, testified before the House Foreign Affairs subcommittee.

I guess Ms. Nuzzo had not read or heard of those very travel restrictions implemented by Russia, Singapore, Taiwan, and Hong Kong.

On January 31, Singapore canceled all inbound flights from China and closed its borders to all Chinese visitors and all other persons who had been to China within the past 14 days. Singapore has reported 187 cases of infection and no deaths. [2] Taiwan and Hong Kong implemented similar measures. But in a long March 13 opinion piece in the New York Times about the programs implemented by these countries, the words “border” or “closings” was not mentioned.

In the US, citizens have been regaled with an even greater fear than dying of Wuhan flu. On February 5, The American Civil Liberties Union senior policy analyst Jay Stanley said the Trump administration’s escalation of restrictions tests the balance of public health and individual liberty. “Quarantining somebody is an extraordinary deprivation of their liberties,” he said. “There’s a burden on the government to determine that it’s really using the least restrictive alternative.” Quarantining = bad. Exponential spread of deadly infection = okay.

Italy has the largest number of Chinese people, both legal and illegal, living there out of any country in Europe. A sick kind of political correctness was taken to the extreme limits of cultural suicide by the Mayor of Florence, Italy on February 2 when he encouraged Italians to “Hug a Chinese” as a stand against racism. And so, hug they did.

Mayor Nardella is a member of the left-wing Democratic Party in Italy.

At present, the streets of Florence are empty. Not even Italians are hugging their fellow Italians, much less Chinese, as all of Italy is locked down and under virtual if not actual martial law. There are reportedly over 12,000 infections and 827 deaths. [3] Italy has the most coronavirus infections and deaths than any European country.

I wonder what Mayor Nardella’s chances of reelection are in Florence?

[1] 147 cases with 0 deaths at the time of publication, according to the Russian government’s dedicated COVID-19 information page (in Russian).

[2] 266 cases with 0 deaths at the time of publication, according to a dedicated COVID-19 tracking website launched in Singapore.

[3] 26,062 cases with 2,503 deaths and 2,941 recoveries at the time of publication, according to the Italian government’s dedicated COVID-19 information page (in Italian).

« The Last Words of Yukio Mishima to His Followers

How Coronavirus Will Change the World »