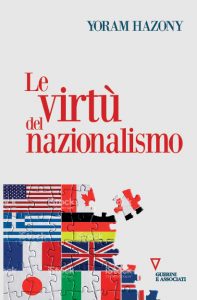 Yoram Hazony’s argument in The Virtue of Nationalism (reviewed here and here) depends on a hard either/or between the nation-state and the empire. A nation is either sovereign or it isn’t. Empires inevitably destroy the sovereignty of the states they incorporate, even if this fact is cloaked in lovey liberal euphemisms.

Hazony, moreover, argues that even though empires might appeal to universalistic ideologies, they always begin with a particular people, a particular ethnic core, that inevitably stamps the empire with the ethnic character of the founding population. Thus for Hazony, an empire is a regime in which a dominant people rules over other peoples, some of which could otherwise have their own sovereign homelands.

The supposedly neutral or civic nature of states such as the United States, Britain, and France is . . . illusory. The strength and stability of these free states is entirely the result of the overwhelming dominance of the American, English, and French nations over any and all competing nations and tribes within their borders—a dominance that was achieved in all three cases through the destruction of any significant competitors over centuries. (p. 161)

This is true, of course. The United States was created by throwing out European colonial powers, subjugating Indian tribes and blacks (free and enslaved), conquering Mexican territory, suppressing Mormon polygamists, and subjugating the Confederacy through bloody warfare and onerous occupation. The United Kingdom was created by subjugating various ethnic and linguistic minorities—the Welsh, the Cornish, the Scots, the Irish—and colonizing part of Ireland. France was created by subjugating and marginalizing Bretons, Basques, Occitanians, Germans, and Savoyards. Since at least some of these subordinate peoples could have sovereign homelands of their own, the US, UK, and France are empires, which maintain their power through despotic means, e.g., “the destruction of any significant competitors over centuries.”

While Hazony praises the US, UK, and France for constructing nation-states through “centuries” of subjugation and “destruction” of “competitors,” he has nothing kind to say about Iraq and Syria, both of which are multiethnic states ruled despotically by a core tribal group: the Sunni in Iraq, the Alawites in Syria (pp. 162–63). Hazony denigrates these states in comparison with Israel, in which Jews are the dominant ethnic group in a society that includes various minorities, including Christians, Druze, and Bedouins, but no Palestinians (pp. 163–64).

The only difference between Israel and Iraq or Syria is this: Israel is an explicitly and officially Jewish dominated state, whereas Iraq is not officially a Sunni dominated state, and Syria is not officially an Alawite dominated state. On Hazony’s account, all that would be necessary to make Iraq and Syria into nation-states is, paradoxically, to own up to the fact that they are actually mini empires. But if they own up to this and successfully subjugate competing ethnic groups, then by Hazony’s standards they have attained the necessary condition for developing “free” institutions:

It is the internal cohesion of these nations [the US, UK, and France] that makes the national states in question possible, and the cultural inheritance of these nations that establishes the character of each of their respective states. If there is anything to be learned from these states, it is that the overwhelming dominance of a single nationality with a given space allows for the growth of free institutions, including individual rights and liberties, that an internally divided state—that is, a non-national state—cannot, in general, either develop or maintain. (p. 161)

But in what sense do these little empires really have “free institutions”? Hazony makes a distinction between free states, in which a nation-state emerges from the voluntary decision of different tribes, and despotic states, in which one group subjugates others. By this standard, the US, UK, and France are despotic not free.

Hazony, moreover, emphasizes that one of the values of nationalism is that it offers “collective freedom” to different peoples. He also denies that multicultural states can have ethnically “neutral” institutions. The US Constitution, for instance, is a document suffused with the character of its Anglo-Protestant creators: “The reverence for all such documents and symbols would be an artifact of a particular tribal or national tradition, and so not neutral at all. And this is precisely how they would be seen by those minority nations and tribes that are not tired by bonds of mutual loyalty to the national majority of the state, and do not regard what happens to the national majority as if it were happening to themselves” (p. 159). This means that the “free institutions” of the US, UK, and France would be perceived (correctly) as expressions of the collective freedom of the dominant groups at the expense of the collective freedom of subordinate groups.

Hazony sums up his position in rather crass terms:

The overwhelming dominance of a single, cohesive nationality, bound together by indissoluble bonds of mutual loyalty, is in fact the only basis for domestic peace within a free state. By this I do not means that the entire population must be drawn from a single nationality, for no such thing exists anywhere on earth. Moreover, there is no evidence that such a compete homogeneity is necessary for the cohesion, stability, and success of the state. Rather, what is needed for the establishment of a stable and free state is a majority nation whose cultural dominance is plain and unquestioned, and against which resistance appears to be futile. (p. 165)

There you have it: We’re here to bring you freedom. Resistance is futile.

Hazony’s frank ethnic supremacism exists in tension with his sixth principle of an order of national states, namely “Protection of minority nations and tribes by the national government” (p. 183). On Hazony’s account, protection and accommodation of minorities seems entirely consistent with simply oppressing them:

The protection and accommodation of minority nations and tribes cannot express itself in the same way in every national state. There are national and tribal minorities whose disaffection is to a substantial degree the result of abuse and neglect, in which the national state is itself guilty of creating a sphere of anarchy within its own borders, and consequently of undermining the order of national states as a whole. At the same time, there are national and tribal minorities whose disaffection is aggressively cultivated by other national states or by imperial powers, which stoke fear and anger among them for their own purposes. And, of course, both may be true. In some cases, the problem of disaffection must therefore be dealt with by a greater measure of political or religious autonomy than had been considered tolerable; while in others, there is no choice but for the national state to apply more rigorous measures to deprive imperialist and anarchic elements of their aspirations by force. And it may be that both approaches have to be applied at once. (pp. 183–84)

What sort of “rigorous measures” does Hazony contemplate? Should one look to Israel for examples? Would it include assassinations, hostage-taking, and collective punishment? Surely it is an abuse of language to describe such measures as “protection and accommodation” of minority groups. This is internal anarchy verging on civil war.

What would Hazony’s advice be to Americans, whose white supremacy system has been dismantled since the Civil Rights Act of 1964 and the Immigration and Nationality Act of 1965? How would he advise that we reestablish white supremacy and show uppity blacks, Jews, Asians, and mestizos that “resistance is futile”? Corralling them into walled ghettos and occasionally dropping phosphorous on them? Slipping exploding cellphones to the leaders of Black Lives Matter? Dispatching bulldozers to level the mansions of Sheldon Adelson and Paul Singer?

Even to discuss it is deeply distasteful.

Which means that if Hazony’s writings become influential, they will only be trotted out by conservatives to justify Israeli policy, but they will never be applied to regaining control of our own white homelands, because we just don’t have the stomach for it. Which means, in effect, nationalism for Israel and more of the same for the West. Which means that Hazony’s views will be functionally identical to the neoconservatism that he rejects.

What Hazony does not contemplate is giving disaffected minorities their freedom. He does speak of granting minorities “a greater measure of political or religious autonomy than had been considered tolerable,” but he is essentially talking about tinkering with incentives on Indian reservations, not creating sovereign homelands. But clearly there are situations when different tribes occupying the same lands become so hostile and embittered that they can no longer live together and need to contemplate complete separation.

There are two ways of giving disaffected minorities their freedom: moving borders and moving peoples. Moving borders means drawing a line around a disaffected ethnic group and either carving out new homelands or carving off territories and ceding them to neighboring states composed of the same ethnic group. Moving peoples—like in the book of Exodus—means shifting populations from one sovereign state to another. Both techniques can be used in tandem to separate enemy nations.

The main reason why states may not wish to grant freedom to subordinate groups is because they regard these people and the land under their feet as exploitable resources that they do not wish to surrender. This sort of amoral, calculating Realpolitik simply invites amoral counter-measures, such as terrorism and economic warfare, to raise the costs of occupation and exploitations higher than the benefits.

The only way to avoid that sort of escalation is to set aside Realpolitik and appeal to moral principles. Hazony has offered a convincing case that the best political system is the nation-state, and the best global order is a world of nation-states. So why not simply affirm, as I do in The White Nationalist Manifesto, the ethnonationalist principle that all peoples have the right to sovereign homelands, to the extent that this is possible?

I will deal with Hazony’s reasons for rejecting a universal right to self-determination in the next and final installment of this series.