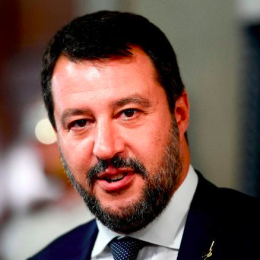 In what is quite clearly emerging as a worldwide Deep State tactic to hamstring the rise of national populism wherever “the system” sees it raising its ugly head, we have — closely following the Trump impeachment saga and the arraignment of Marine Le Pen for posting violent ISIS images on her Twitter account — the withdrawal of the right to immunity for Matteo Salvini, former Italian Minister of the Interior, for deciding not to allow 131 migrants aboard the Gregoretti coastguard vessel to land on his native soil. This has given magistrates in Sicily the go-ahead to proceed with charges that could lead to a sentence of up to 15 years in prison.

This timely intervention by a tribunal of anti-Salvini ministers has apparently given credence to the assertions made by a separate — and far junior — judicial body in Catania that Salvini had “abused his power” by illegally detaining the asylum seekers in 2019, and had, in effect, kidnapped them. It’s a laughably contrived legal case, and lynch-mob style investigation, but also one that could badly impact Salvini’s ambition to lead the Lega political group to electoral success in the forthcoming elections.

The situation — like the wall-to-wall anti-Trump news coverage and the vitriol the French press pours over anyone with the surname Le Pen in France — gives the media ample opportunity to smear Salvini, put off wavering voters, and prefix anything he says with the innuendo that he is a felon. Even if he is only partially chastised, this could be used to disbar him from holding public office.

These are outcomes the Conte administration would privately welcome. Salvini offers up a genuine, if sometimes erratic, opposition to a government that wants open borders, a return to a Cold War stand-off with Putin’s Russia, even stronger laws on hate speech, a European army composed not necessarily of Europeans, and a highly regulated education system that emphasizes the negative aspects of European colonialism and the benefits of modern multiculturalism.

Salvini is, however, not one to take such matters lying down. In his usual cavalier style, he stated that he wishes to go into court with his “head held high,” and quoted the illustrious poet Ezra Pound on Twitter: “If a man is not ready to fight for his ideas, either his ideas are worthless or he is.”

These are words that set the stage for the fight of his life, for it is almost certain that every possible barrier will now be placed in his way prior to the vote.

After all, there is simply no way the system could tolerate his return to the corridors of power. The old maxim “once bitten, twice shy” comes to mind. This, added to the fact that Giorgia Meloni’s Brothers of Italy party would inevitably ride in on his coattails, fills the Rome-Brussels Axis with genuine fear. They’re aware that the fragile, paper-thin power-structure they have built around a tissue of cliché, packed lies could be highly susceptible to a resurgent right-wing coup. Such a move would take a united Europe, composed of ethnically homogenous and nationally-oriented sovereign states, like Hungary, Poland, and the Czech Republic, out of the hands of the globalists and their time-serving bureaucratic puppets and place it firmly in the traditionalist camp.

The early warning shots of just such a revolution have already been fired in Austria and by the Alternative for Germany in the recent regional elections in Saxony.

A renewed sense of identity is awakening across the continent, promising to create an economic and intellectual powerhouse that may just save Western Civilization.