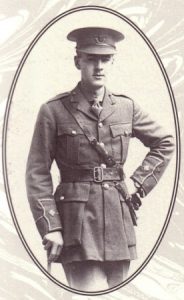 Dark is the world our fathers left us,
Wearily, greyly the long years flow,
Almost the gloom has hope bereft us,
Far is the high gods’ song and low:

Sombre the crests of mountains lonely,
Leafless, wind-ridden, moan the trees;
Down in the valleys is twilight only.
Twilight over the mourning sea;

Time was when earth was always golden,
Time was when skies were always clear;
Spirits and souls of the heroes olden,
Faint are cries from the darkness, hear!

Tear ye the veil of time asunder
Tear the veil, ‘tis the gods’ command,
Hear we the sun-stricken breakers thunder
Over the shore where the heroes stand.

— “Dark is the World Our Fathers Left Us”

With the release of Dome Karukoski’s Tolkien biopic in 2019, the name of Geoffrey Bache Smith, along with Rob Gilson and Christopher Wiseman, has emerged from under the long shadow cast by the author of The Lord of the Rings. Smith was a full and equal member of the Tea Club and Barrovian Society (TCBS), a group of idealistic young men surrounding Tolkien who first met at King Edward’s School in Birmingham, and whose fellowship continued when they went up to Oxbridge and eventually volunteered to fight in the First World War. Indeed, it was Smith who inspired Tolkien to write poetry. The camaraderie and ethos of the TCBS, so gratingly presented in the biopic in spite of Boyle’s best efforts in the role of the aspiring young poet, was perfectly encapsulated in Smith’s real-life communication on hearing of Gilson’s death in the “orgy of death and cruelty” on July 15, 1916 in the trenches of France:

My Dear John Ronald, I saw in the paper this morning that Rob has been killed. I am safe but what does that matter? Do please stick to me, you and Christopher. I am very tired and most frightfully depressed at this worst news. Now one realises in despair what the T. C. B. S. really was. O my dear John Ronald whatever are we going to do?

These sentiments become even more poignant by a prescient last letter he sent to Tolkien just before the recently-promoted 22-year-old acting adjutant of the Lancashire Fusiliers led his men out one cold, December night on a hazardous night patrol at Warlencourt, and was hit by shrapnel:

My chief consolation is that if I am scuppered tonight there will still be left a member of our school group to voice what I dreamed and what we all agreed upon. For the death of one of its members cannot, I am determined, dissolve the group. Death can make us loathsome and helpless as individuals, but it cannot put an end to the immortal four! May God bless you my dear John Ronald and may you say things I have tried to say long after I am not there to say them if such be my lot.

A poet of some minor repute, Smith’s commemorative anthology of poetry, A Spring Harvest, which was originally published by Erskine Macdonald with a Foreword by Tolkien in 1918, was recently republished, and is certainly worthy of the attention of those with a traditionalist sensibility.

Tolkien, who wrote two poems in memory of Smith, “GBS” and “Companions of the Rose,” said of it:

The poems of this book were written at very various times, one, Wind over the Sea, I believe even as early as 1910, but the order in which they are here given is not chronological beyond the fact that the third part contains only poems written after the outbreak of the war. Of these some were written in England (at Oxford in particular), some in Wales and very many during a year in France from November 1915 to December 1916, which was broken by one leave in the middle of May. “The Burial of Sophocles,” which is here placed at the end, was begun before the war and continued at odd times and in various circumstances afterwards; the final version was sent me from the trenches. Beyond these few facts no prelude and no envoi is needed other than those here printed as their author left them.

But despite such an endorsement – which is beautifully depicted in the last scene between Tolkien (Nicholas Hoult) and Smith’s mother (Genevieve O’Reilly) in the otherwise underwhelming Tolkien biopic – from a man who himself would later inspire millions of zealous Hobbit adherents, Smith was and still is largely overlooked to this day. Simply no comparison can be made to the attention and critical acclaim given to other British First World War poets such as Wilfred Owen, who, borrowing a line from one of Horace’s Odes, penned his famous “Dulce et Decorum est” in 1920; or Siegfried Sassoon, who wrote “Counter-Attack,” “Dreamers,” “How to Die,” and “The General” – and who was immortalized in Pat Barker’s anti-war novel Regeneration (1991).

Perhaps one of the main reasons for this oversight is because both Owen and Sassoon, though clearly talented poets in their own right, were in tune with the prevalent pacifist pro-Left and anti-patriotic political tendencies of the intellectual artistes and academics of the post-war period. Smith, like Rupert Brooke, was more likely to be classified as an imperialist due to the fact that he shared with Brooke the capability to blend conservative and nationalist themes, as in “April 1916”:

O little isle amid unquiet seas,
Though grisly messengers knock on many doors,
Though there be many storms among your trees
And all your banners rent with ancient wars;
Yet such a grace and majesty as yours
There be still some, whose glad hearth suffereth
All hate can bring from her misgotten stores,
Telling themselves, so England’s self draw breath,
That’s all the happiness on this side of death.

He also celebrated glories of nature:

It was upon a night of spring,
Even the time when first do sing
The new-returned nightingales;
Whenas all hills and woods and dales
Are resonant with melody
Of songs that die not, but shall be
Unto the latest hour of time
Beyond the life of word or rime –
Whenas all brooks more softly flow
Remembering lovers long ago
That stood upon their banks and vowed,
And love was with them like a cloud . . .

These are juxtaposed with depictions of the sublime beauty of great Western centers of learning like Oxford:

In Merton, of many courts
And doorways good to wander through,
Gable and spire shall glitter white
Or tawny gold against the blue:

And still the winter sun shall smile
At noonday, or at sunset hour
On Magdalen, girt with ancient trees,
Beneath her bright immortal tower.

Though nevermore we tread the ways
That our returning feet have known
Past Oriel, and Christ Church gate
Unto those dearer walls, our own.

Oxford is evermore the same,
Unto, the uttermost verge of time,
Though grave-dust choke the sons of men,
And silence wait upon the rime.

These are poems redolent with themes of elitism, rooted antiquity, and national myth. Take “Glastonbury”:

And alien hopes, lives, peoples, alien faiths
Were all confounded on those desolate shores . . .

We praise, we praise the immortal dead,
Who strove beneath unheeding skies
For truth that raised the drooping head,
For light that gladdened weary eyes:

The martyr’s cross, the warrior’s sword,
How should they be of lesser worth
Than some unprofitable hoard
In ancient mines below the earth?

And “The Old Kings”:

Far away from sunny rills,
Far away from golden broom,
Far away from any town
Whither merchants travel down –
In a hollow of the hills
In impenetrable gloom sit the old forgotten kings
Unto whom no poet sings,
Unto whom none makes bequest,
Only wayward shreds of dreams,
And the shock of ancient strife
On the further shore of life.

When our days are done, shall we
Enter their pale company?

The answer to this question was, regrettably, all too soon, for Smith met his end dying in a field hospital in that foolhardy Brother’s War, along with the much-maligned and “hated Huns.” As John Garth’s book Tolkien and The Great War: The Threshold of Middle-Earth (2004) implies, he did, however, bequeath us with a poem that would inspire Tolkien to greatness. Smith willed his surviving friend to scale the heights of literary glory:

So we lay down the pen,
So we forbear the building of the rime,
And bid our hearts be steel for times and a time
Till ends the strife, and then,
When the New Age is verily begun,
God grant that we may do the things undone.