The Truth About the Universities:
Herb Childress’ The Adjunct Underclass 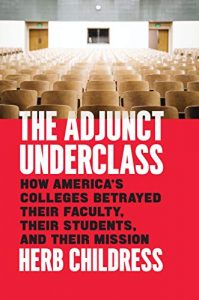 Herb Childress
The Adjunct Underclass: How America’s Colleges Betrayed Their Faculty, Their Students, and Their Mission
Chicago: University of Chicago Press, 2019

Beginning with its provocative title, The Adjunct Underclass is quit lit, that newish genre of mostly humanities PhDs rage-quitting their academic job search. The rage comes because with so many more qualified PhDs than professorships, being chosen among many equally qualified applicants is pretty much a function of dumb luck; unless, of course, you happen to be non-white, crippled, or a tranny. Optimistic new PhDs are produced, spend a few years working in academia’s gig economy as precarious “adjuncts,” realize they will never get a professorship, and storm out of the academy to do something else. Quit lit is the sound of the door slamming on the way out. Herb Childress’ book frames the situation in terms of class warfare, with adjuncts as an oppressed new proletariat. The framing is a little precious when you consider that any adjunct can walk away and look for another job. What’s good about the book is Childress’ detailed examination of how universities work today. If you’re curious about what has gone wrong at the university, or if you have friends in graduate school, or if, God help you, you’re contemplating graduate school yourself, this is a book worth reading.

Let’s talk about this new underclass, the adjuncts. “Adjunct” is short for “adjunct professor,” a misleading honorific because adjuncts live in a different world from real professors. Real professors ascend through a hierarchy and are eligible for tenure, which means job security for life. They receive a yearly salary, vacations, benefits, money to go to conferences and buy books, and an office. Adjuncts are hired by the course (about three thousand dollars is the going rate) and receive no benefits. The work is precarious and unpredictable: Job offers come shortly before the semester begins and courses are cancelled at the last minute if enrollment isn’t high enough. Childress does a nice job calculating the hourly adjunct wage after you factor in course prep, grading, office hours, and so on. It works out to about minimum wage. Adjuncts are like academic Uber drivers, and Childress points out that the similarity holds in one very crucial way: No matter how much a driver works, there’s no career progression into the Uber executive ranks. Similarly, faculties do not hire adjuncts. It’s an unwritten rule, and the reasons for it are complex, though Childress does a good job at unpacking them. At any rate, the rule – a rule with just enough exceptions to keep one’s hope alive – is that the longer you spend as an adjunct, the less likely you are to be hired as a professor, especially at the school where you teach. Even in these bad conditions, a lot of adjuncts keep trying: teaching, publishing, and going to conferences on their own dime for years, hoping against the odds to be lucky enough to win a real professorship. In that sense, Childress is right that there is a distinction among the university faculty, a nasty little trade secret. Books like this should be required reading for anyone who dreams of becoming a professor.

I wish I had read such a book. The first piece of quit lit I encountered was Rebecca Schuman’s funny “Thesis Hatement,” which I happened upon mere hours after successfully defending my own dissertation in what would not prove to be a good omen for my academic career. Most of us adjunct for a few years, perhaps longer if we’re doing it part time, and then we figure out that the academy doesn’t want us, and we leave. Childress never gave up. If Schuman is quit lit’s snarky mom, Herb Childress is its wine-soaked, weepy uncle. He’s been trying to lock down that tenure-track position with his PhD in architecture since the 1990s, working as a university administrator to get a foot in the door. It’s sad and clingy, but because he did cling on, Childress has learned more than most about how the academic sausage is made.

The adjunct situation is a tragedy of the commons. The ideal of the university was a place where a community of gentlemen scholars studied obscure things. The scholars taught the children of the rich, whose tuition financed the enterprise and also allowed the admission of some talented poor children. Every generation, the scholars chose a few successors. Scholars were poor but had the prestige of contributing something of worth to society. But that was long ago. Now, faculties exploit idealistic young grad students by preparing them for professorships that don’t exist. The faculty does this because it means cheap assistants, more prestige, more grant money, and it reduces their teaching loads. The newly-minted PhDs become adjuncts and soon realize that teaching has no future. The smart ones exploit the university by teaching at minimum effort, recycling content, and giving everyone good grades; a few bad student evaluations can get an adjunct fired. The university’s product is devalued, but the institution is busy exploiting everyone by marketing the ivy-covered stone buildings and tweed-clad faculty even as they cheerfully replace retiring professors with adjuncts and use the money to buy rock-climbing walls and smoothie bars, and of course more administrators, all of which will help to exploit 17-year-old kids who will overspend on a low-value degree. Every iteration further destroys the social capital of the university, but it’s nobody’s job to care.

The only group that doesn’t seem to be suffering is the university administration. To the contrary, with every passing year, administrators proliferate: directors of recruitment, retention, inclusion, diversity, and the troupes of staff that they bring with them. People outside the university often wonder what all these administrators are doing that didn’t need doing in the past, and this is the question that Childress helps to answer. Over the past century, universities threw open the gates, admitting Jews, women, blacks, other races, cripples, and sexual deviants. Since these people do not belong at university, someone needs to cajole and ease them through the process, and plead for lowered standards on their behalf when they prove unequal to the task. This, as Childress points out, is where the administration comes in. Clever Jews do well at university, but Jewish neurosis takes its toll, emotional women require a different kind of support . . . you can finish the list for yourself. To put it differently, as the university grows more diverse, the chaos that always accompanies diversity increases, and the administration is there to smooth it over. If you wonder how the university has protected itself from the toxic Frankfurt School ideas it has been pumping into Western culture for the last eighty years, Childress provides an answer: It takes more and more administrators to contain the diversity, but with enough oversight, diversity can be contained. In the same way that China has learned that you can have an orderly Muslim population so long as you are willing to put a cop on every block, universities have evolved the massive support system that diversity requires, for only a few tens of thousands of dollars per student per year.

Some of Childress’ comments are so pointed that they almost make you wonder if he’s on our side. He goes out of his way to bemoan the fact that as women become professors, the profession becomes devalued. He notes that there’s a general pattern that as women are pushed into jobs previously done by men, the market devalues those same jobs – almost as if the market were correcting for falling standards. But persevere to the end of the book and you will find that Herb Childress is most definitely not on our side. His policy suggestions to improve the university have the depth of AMLO’s “hugs not bullets” plan to stop cartel violence. Childress envisions a university where every professor is attuned to the needs of diversity, presumably via unending compulsory training. And then, in the Epilogue, Herb really empties his purse on the table. Not getting a tenure-track job made him depressed, ruined his marriage, and left him shaking with impotent rage for decades even as he internalized the standards that made him obsolete.

It’s bad for Childress, but not necessarily bad for us. In his earnest way, Childress shows us the gears of the machine spewing diversity into the West. We shouldn’t be idealistic about the contemporary university; we should recognize that it is an engine built to degenerate us, and we should react accordingly. It would be good to choke the machine and break it; better still to remake it to do something that we want. And when we start thinking of the university this way, we can see that others have got there first. Two groups who are redirecting the university’s energy are especially interesting. One is the Muslim Brotherhood, who recruit through campus youth groups. The Brotherhood knows that degeneracy will drive students to them. Then there’s the Confucius Institutes, or, to follow the string to the puppet master, China. Apparently, the Chinese find it worthwhile to strike at and silence those who may grow into their enemies, so to speak, in utero. We need to make the machine work for us.

When I was an adjunct, I encountered more and more institutional resistance to teaching the great books. This, too, gives me hope. The institution dislikes books written by great white men, and that is because these books were also written for white men. The Western tradition is being squeezed out of the university because it is incompatible with diversity. Where will the tradition go? Who will be the heirs of Plato’s school and Epicurus’ garden, of the invisible college and the Republic of Letters? Don’t be distracted by the fact that the Dissident Right doesn’t have the polish of the institutional university. Someone in search of the Good, the True, and the Beautiful would not search in vain in the catalogues of Arktos or Counter-Currents or Castalia House. Someone looking for the rough and tumble of informed argument could do worse than the audio archives of Westward or the Godcast or the Poz Button.

In the end, the lesson of Herb Childress’ book is: Don’t be Herb. Don’t be a sucker and go to grad school looking for a job. Just as importantly, don’t make Herb’s mistake of thinking that the only way to participate in the life of the mind is through the institutional university. And never, never let yourself be so beaten down that like Herb that you come to sympathize with the outsiders who have flooded our universities and our countries and are seeking to replace us. The humanities are our birthright. Let’s take them back.