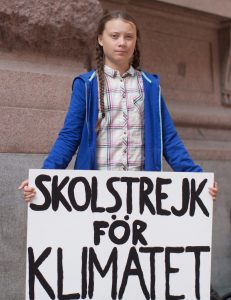 I saw a recent photo of Greta Thunberg, the young climate activist, and the poor thing looked quite ragged. Just run down. I felt deep sympathy for her. She’s right: Her childhood is being stolen, and people are indeed suffering. I hope she makes it.

She is often mocked and ridiculed – sometimes relentlessly – by the Right, but I feel this is misplaced anger, and that Greta is not being viewed with nuance. She has been called a “stupid bitch,” her appearance has been mocked, and her developmental disorder is frequently used against her. I wish to present another side of this discussion, from the standpoint of a man who deeply believes in natural hierarchies and aristocrats of the soul.

I like Greta. She has a good heart. She just needs to understand what’s going on. She could be a powerful ally. It is sad to see the evil globalist forces exploiting a young, innocent girl – one of my own stock – to push an agenda that aims to see her hated, despised, and abused in her own homeland.

I have discussed previously that I do not believe children, or those who have not been exposed to all of the data – data that is often hidden by the mainstream media – can be considered “true believers” in an ideology. This applies to Greta, but also more broadly to the entire Left-wing environmentalist sphere.

I’ve met and talked to a lot of what I call “single-issue liberals,” many of whom are some flavor of environmentalist. They are people who identify more politically with the Left/liberalism, due largely – if not entirely – to their stance on environmentalism and animal rights. To me, the very interesting thing is that these are not even people who have been won over by Leftist environmental policies (banning straws and the Green New Deal are non-starters), but they are simply so put off by the neocon/fake Right being so deliberately hostile to environmental concerns: “Drill, baby, drill” slogans and libertarians who believe that torturing animals is fine because “animals are private property and the government should not tell you what you can and cannot do with private property,” for example. These single-issue liberals are people who often have a true connection to the soil and nature itself. They are well-intentioned and sincere in their desire to become proper stewards of the environment, yet they see no path in the mainstream political landscape to deal with what they accurately see to be growing issues that can very well lead to catastrophe and the total collapse of entire ecosystems. These are people who are often implicitly expressing that hierarchies do exist in nature, and that we have a crucial role to play in that order.

There are very real concerns. There will be more pounds of plastic in the ocean than fish if trends continue. The West banning straws will do nothing to mitigate or reverse this, as nearly all of the waste comes from ten rivers that are located in Africa and Asia. Microplastics have been found in all species of sea life, and their harmful effects are not yet fully known. Cancer, birth defects, lower fertility rates, more sickness, and other negative effects may result from this mess.

Global air pollution is another real concern, and increasing asthma rates, cancers, and other illnesses can all be traced to air pollution. Again, as with the plastic and waste in the ocean, it’s mostly coming from the same parts of the planet: the Global South; i.e., non-white nations. This is why I believe environmentalism matters, wholly irrespective of the truth of anthropogenic climate change. We are the stewards of the natural world, and we should act as such. The Left-Greens do a lot of damage to this simple idea with their lies about climate refugees and paper straws.

Left-environmentalism is mostly about taxing the middle class in Europe and North America, while simultaneously opening our borders to so-called “climate refugees.” Greta is being manipulated by very evil people to push an evil agenda. This is true. However, we have the chance to show those single-issue environmentalists the other half of the story – and many could become wonderful allies.

Right-wing environmentalism has very deep roots. Madison Grant, John Muir, Teddy Roosevelt, Richard Walther Darré, Jorian Jenks, Knut Hamsun, Savitri Devi, and Pentti Linkola, to name only a few, were all deep ecologists and Green naturalists. These individuals have had a tremendous influence on me personally, but also in many cases influence how we view the natural world and its preservation today. Unlike the Sierra Club, which took money to remain silent on the impact that mass migration and population growth have on pollution, environmentalism, and climate change, the Deep Greens are willing to confront such topics that are too uncomfortable for the mainstream. We should be discussing limits to growth, de-growth, re-wilding, ending aid to all nations with exploding populations, sanctioning others, and limiting overseas markets. Linkola has discussed “lifeboat ethics,” which is the realization that you can’t save everyone, and that by trying, you lose everything. We cannot have infinite economic growth and sustainability; they are contradictions in terms. We cannot have open borders – and hence, infinite population growth – and try to decrease air pollution in our cities. We must face harsh realities. And only the Deep Green Right will dare to address them.

The Deep Green understands the natural hierarchy, and our place and role in regards to nature. The Left is often consumed with notions of “environmental justice” and the infusing of racial grievance politics into naturalism, as with the Green New Deal, which reads more like a manifesto written by petulant Diaspora populations than as a plan to deal with the destruction of the natural world by the very people writing such a laughable program.

In her speech, Greta was right. Her childhood has indeed been stolen. People are suffering, people are dying, and all these clowns want to talk about are fairy tales of infinite economic growth.

Greta is tapping into something very powerful that her handlers may eventually lose control of, and that’s what I’m fueling. I want the golem to turn on their creators this time. I hope to be part of the Deep Green movement that shows Greta and others like her that there is more to the story than the globalist cabal is letting on, and that we have solutions to these problems that loom ominously on the horizon. I hope to help Greta – and, indeed, all of Europe’s children – by helping to provide them with a safe homeland and a sustainable society – one that does not abuse, exploit, traffic, mock, or deride, but rather nurtures, guides, educates, and protects the next generation. I view Greta like I’ve viewed so many others who have been used and betrayed by these goblin-faced demons: as somebody who needs us more than ever.

If not for yourself, carry on, weary as you may be, for the next generation. I look at Greta and see a girl who could have been my little sister. I’m sorry that her childhood, along with so many others, has been stolen – and that is what this entire movement is about: building a future so that our people may live on.