In Bed with the Press 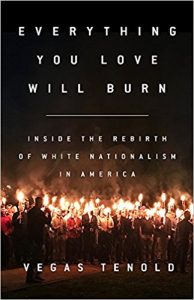 Vegas Tenold
Everything You Love Will Burn: Inside the Rebirth of White Nationalism in America
New York: Nation Books, 2018

This is the most depressing book I’ve ever read. Vegas Tenold is a Norwegian Leftist journalist who has spent the last six years “embedded” with the National Socialist Movement, KKK groups, and the Traditionalist Workers Party. The result is basically a book about Matt Heimbach, whose grand strategy, at least in its first phase, is to create a coalition of skinhead, Klan, and National Socialist groups under the TWP banner. We’ll never know what phase two is.

Tenold’s thesis — that he has to maintain to keep people slogging through almost three hundred pages of excruciating travelogues, including bathroom breaks — is that Heimbach and company are a threat to the global multicultural order. But he undercuts his thesis on every page with acidic portraits of an array of bumbling buffoons and self-marginalizing cranks and kooks. Obviously, these people might be a danger to themselves — or an occasional innocent bystander — but they pose no threat to the current regime. Which means that Tenold’s whole po-faced, “deeply concerned” conceit is a fraud. His book would have been much leaner and more honest if he had simply cast it as a political freak show for smug middle-class Leftist urbanites who find it entertaining and self-affirming to look down on the antics of “white trash.”

I have not met most of the people Tenold profiles, so it would be foolish to take every detail of his account at face value. But from what I know about Heimbach and Richard Spencer, Tenold’s portraits strike me as deadly accurate, which argues for the book’s overall veracity, even though it is filled with bizarre errors. For instance, Jared Taylor is called Richard Taylor, George Wallace was murdered, and Mike Enoch and TRS are grossly mischaracterized. But these sorts of slips may simply be a function of Tenold’s laser-like focus on Heimbach and associates.

In Tenold’s portrait, Heimbach is described as a physically repulsive, slovenly crank with a compulsion to embrace positions that are divisive and self-marginalizing even within the marginal far-Right subculture, like proclaiming Orthodox Christianity at a Klan rally. All this is pretty much obvious to anyone who has followed Heimbach’s public career.

Tenold nails Spencer: “He wore tweed, drank tea, and mixed an air of affected intellectualism with the smug arrogance of every evil fraternity kid from 1980s college movies.” He also correctly observes Spencer’s penchant for lazy provocations rather than working out intellectually and morally defensible positions, his bizarre inability to take responsibility for any of his errors, such as the public relations disaster known as “hailgate,” and his grandiose self-image. I laughed out loud at Spencer lines like “The movement needs an enigmatic, badass leader,” which is presumably how he fancies himself.

According to Tenold, Heimbach sees Spencer as a “cocktail-sipping asshole,” but spends the last half of the book pathetically chasing after Spencer’s attention and being repeatedly snubbed, even after showing up to help defend Spencer when he spoke at Auburn University. Heimbach’s long-simmering hatred of Spencer is well-known, so the rest seems rather bizarre.

But let’s just pretend that this whole book is a pack of lies and distortions, as partisans of Spencer and Heimbach are likely to do. Why then did Heimbach and Spencer help Tenold create it?

What did Heimbach or Spencer expect from talking to this guy, or legions of other reporters for that matter? Are they so naïve that they thought they would get good press? I can’t imagine any neutral party reading Tenold’s book and coming away with a more positive vision of White Nationalism.

What is the point of giving time and access to journalists — whom we should regard as enemy combatants — just so they can decorate the same old boilerplate about “hate” with a few fresh facts to make their mental poison more palatable?

Is somebody monitoring these reporters when they are “embedded,” or are they just allowed to skulk around unsupervised? Has it crossed anyone’s mind that these snoops might be passing along intelligence to the ADL, SPLC, antifa, and law enforcement?

Hailgate, the cringe-inducing fall of Eli Mosley, and now this terrible book — and I am sure many scandals to come — are all predictable results of crawling into bed with the press.

So why do they keep doing it? Why are they such promiscuous attention whores?

Years ago, Matt Parrott told me the cynical strategy behind Heimbach’s active press engagement, and I suspect that similar calculations drive Spencer as well. According to Parrott, most people in this movement lack the “self-esteem” and judgment to choose their own leaders. Instead, they allow the press and groups like the SPLC to anoint their leaders for them. Therefore, if one wants to become a White Nationalist leader, one must court the press and the SPLC.

How does one court the press? By giving them what they want, of course. By fulfilling the stereotypes that advance the enemy’s narrative. Thus Heimbach cheerfully incarnates the fat redneck, while Spencer plays the evil WASP snob. Thus Heimbach and Spencer have a symbiotic relationship with the enemy media. The media love Heimbach and Spencer, because they help cast White Nationalism in a negative light, and Heimbach and Spencer love the media because they believe it will elevate them over their rivals in the movement. Neither side has an interest in representing White Nationalism in a way that might actually resonate with the white majority.

But there’s more to being a leader than being seen as a leader — especially by the least discerning among us. Real leadership needs to be built on solid achievements, whether grassroots organizing, or creating educational and media organizations, or being a public intellectual. It requires hard, patient work, over many years. So it is tempting to just pull a publicity stunt in the hope that the enemy media will AstroTurf you into a position of virtual leadership.

Even if you pull it off, though, you need to start delivering positive results if you want to stay on top. But in Spencer’s case, the things he did of value — NPI and Radix Journal — have suffered, whereas the rallies and college speeches have been net negatives. He has alienated so many friends, colleagues, allies, and followers — Jason Jorjani, Red Ice, Identity Europa, etc. — that there aren’t even enough people left to cast a Spencer in the Bunker Downfall parody.

But at least Heimbach has stood by him.

Will these people ever go away?

Not as long as the movement lets a hostile press declare who our leaders are.