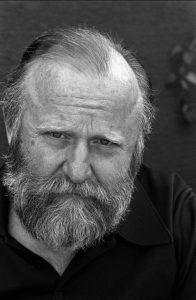 Frank Herbert was born on this day in 1920 in Tacoma, Washington. Herbert is best-known as the creator of Dune, which is the most widely-read and influential science fiction novel of all time. Herbert, moreover, is an artist of the Right. As I wrote in my review of Denis Villeneuve’s Dune, Part 1:

Frank Herbert’s vision of the future was deeply reactionary. He depicts a world where liberal democracy failed and has been replaced by a feudal imperium. In Herbert’s imperium, artificial intelligence has been destroyed as oppressive and remains under the iron ban of a syncretic form of Christianity. Computer technology is a great leveler. Without it, humanity must fall back on natural gifts, which are rare. To refine these gifts and make them more common, eugenics is practiced. Biological sex differences are recognized. Bureaucracies are disdained as repressive instruments of equality and fairness. The story of Leto II in Children of Dune and God Emperor of Dune is opposed to surveillance and empire in favor of freedom and pluralism. Herbert believed that mankind would never be safe unless we could free ourselves from the leveling gaze of a single, universal political order.

Beyond that, Herbert has quite compelling reasons for his belief that liberal democracy will not take mankind to the stars and that mankind can only spread across the galaxy by returning to archaic social forms like hereditary monarchy, feudalism, and initiatic spiritual orders.

Herbert’s vision of the future is also gloriously Eurocentric. His imperium is medieval Europe writ large, while his vision of Arrakis and its native people, the Fremen, is based on Arabia, i.e., the Near East—“near” in relation to Europe, that is.

Counter-Currents has published the following works on Frank Herbert:

Substantial references to Frank Herbert are also present in:

In the coming years, Counter-Currents will explore the rest of Frank Herbert’s corpus from the Right.