Knut Hamsun’s The Women at the Pump 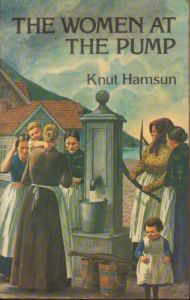 If George Costanza of Seinfeld were a real person, he probably would have committed suicide sometime during the show’s fifth season. Much of the humor behind George is how, through an utter lack of self-awareness and shame, he constantly developed elaborate schemes to either hide or feed his sociopathic pettiness. These schemes always unraveled, of course, and the comeuppances always came good and hard, hence the funny.

In the real world, however, there is only so much assault upon one’s dignity a person can endure. Yet George endured, time and time again, in order to entertain millions.

But like the sitcom itself, George has no moral center, and so the humor surrounding his character lacks all pathos. There’s no inspirational value in George; if anything, our baser impulses are vindicated by his inability to learn from his frequent humiliations. His humor ultimately becomes as petty and self-centered as he is. But imagine a character like George Costanza, but with a moral center and with a sense of human dignity. Such a character is Oliver Andersen, and he appears in Knut Hamsun’s wonderful novel The Women at the Pump.

Published in 1926 and taking place sometime before the First World War, the story covers over two decades in the lives of ordinary folks living in an unnamed coastal town in Norway. Mundane events, family squabbles, and petty rivalries make up much of what could be considered a plot as Hamsun offers us candid glimpses into the souls of his dozen or so main characters. These characters are sometimes beatific, sometimes cringeworthy, but always so singular and deftly created that they never fail to evince a sense of wonder and mystery as they go about their daily lives. And the women in the town never fail to discuss all these goings-on at the town water pump.

Although religion is a marginal thing in The Women at the Pump, one gets the feeling that these people are creatures of God, and therefore worthy of our rapt attention — and this goes for folks of all classes and ways of life. These are limited, imperfect people (and who isn’t?), but their virtues are few and precious. Hamsun stands alone in his ability to present people’s all-too-human foibles and pretensions without looking down on or judging them. The reader doesn’t, either, and instead awaits their fate by the end of the novel almost as if it were his own.

These are people we now know, having read The Women at the Pump.

We first meet young Oliver as he is saying his goodbyes to his sweetheart Petra from the deck of the steamship Fia. The ship’s owner, double consul Johnsen, big shot that he is, had named the boat after his little daughter. He was there, sporting his “paunch of prosperity,” while his ostentatious wife, daughter, and haughty son Scheldrup look on. Oliver, described as a sturdy, working-class lad with a bit of the schemer and daredevil in him, is excited to see the world. Before shipping off, he showers Petra with a gift of raisins for all to see.

One page later, we learn that Oliver had suffered a gruesome injury at sea, and has returned a one-legged cripple. After a period of despondency and laziness during which he and his widowed mother live nearly in poverty, he marries Petra, finds steady work at consul Johnsen’s warehouse, and starts having children. He never loses his love for the sea, and will often stay out alone on fishing trips for days. He also never stops scheming in order to enhance his prestige in the eyes of the townsfolk, either by stealing and hoarding eiderdown or hunting for valuable junk on the sea or by cheating or rewarding certain customers on the sly at the warehouse. And there’s that pink tie in the shop he’s always had his eye on. Despite all his fibs and airs, however, he’s a wonderful father, always offering goodies to his kids while stills owing money on his house to the lawyer Fredriksen.

Once Hamsun anchors his story with Oliver’s stability, he introduces us to the other characters. Petty and belligerent, Petra fights often with Oliver, but is kind and thoughtful in her own quiet way. She steals out of the home in her finery at odd hours, sending Oliver into fits of jealousy. For days the women at the pump could not stop talking of the scandal in which she boxed young Scheldrup on the ear — for what reason, one can only guess.

The town’s nihilist doctor — maybe the closest thing to a villain in the novel — is the town’s most capable citizen. He’s fair and decent as a person and a top-notch physician, but he cannot overcome his contempt for the people he serves. And if he can get one over on double consul Johnsen, that would cure him of his misery for at least a day. This is why he digs for gossip wherever he goes. He has a suspicion that Johnsen knows the secret of why so many brown-eyed couples in the town are having blue-eyed babies — and vice versa.

Fredriksen is the ambitious sort. Not as well-heeled as the double consul, but the latter came into his wealth only through his marriage to his fat wife, the very person he had outraged in his younger days when he had gone “wenching” behind her back. Double consul, indeed! Lawyer Fredriksen might one day be elected to the Storting, and then we will see who is the town’s top citizen. Perhaps after knocking Johnsen down a peg or two with some anti-shipping legislation, he will complete his coup by asking Fia for her hand in marriage. How could she say no?

For her part, Fia has grown into an enigmatic woman. Too tall and too thin, yet somehow beautiful, she prides herself in her cultured airs and her art. She is a serious artist who has made several copies of masterworks at the Louvre. She has no time for love, although she galavants with other artists who secretly deplore her work. Of course, she will not stoop to marry any of them. The son of a merchant or a house painter? Never. Is she aloof and self-absorbed by nature, or did her great wealth and comfort make her this way?

This seems like a question for the town’s postmaster — the resident unlettered philosopher who never misses an opportunity to chatter tediously about metaphysics and other abstruse topics to the town’s educated citizenry. Frediksen and the Doctor are his favorite victims. Unlike with those two, however, his personal philosophy is well-developed and has a moral core. He loves to wax on about the importance of parenthood, despite how poorly some of his children turned out. And he’s always so damned contented with himself. Doesn’t he want to get on in the world? It’s a miracle his wife tolerates him at all.

There is much more to The Women at the Pump than only this, of course. Hamsun sets the novel’s gossipy tone through omniscient narration which delves effortlessly into the thought patterns of his subjects. The line between third- and first-person blurs beautifully in it, and what we get are the little lies everyone tells in order to get ahead in society’s fierce bumper-car race. Forgiveness and redemption fit in there as well, but only for those at the very top or the very bottom, it seems. But must it be this way? As Hamsun tells us:

Human beings push against each other and trample on each other; some sink exhausted to the ground and serve as a bridge for others, some perish — they are the ones least fitted for coping with the push, and they perish. This can’t be helped. But the others flourish and blossom. Such is life’s immortality. All this, mind you, they knew at the pump.

By the last third of the novel, mundane happenstance gets replaced with more momentous occasions. First, there is a burglary, which scandalizes the town and ruins at least one life. Then a catastrophe befalls some of the town’s elites, causing Oliver to get sacked at the warehouse. He now faces two crises: getting out from under the thumb of that spiteful Fredriksen, and finding a new means of income. Both seem insurmountable.

But Oliver still has a bit of the schemer and daredevil in him, doesn’t he? With sudden confidence, he concocts an ingenious stratagem to checkmate Fredriksen once and for all. This is Oliver’s moment of greatness: a lowly fisherman and warehouse clerk turning the tables on a distinguished man of the Storting! I’ll bet the women at the pump will wonder about this one for at least a month.

This, however, solves only one of Oliver’s crises. Feeling emboldened, he employs the same stratagem once again, but against Scheldrup Johnsen, who is not so young anymore and has taken over his father’s business. This time, however, Oliver fails. This time, he has a George Costanza moment in which his scheming causes him to unintentionally humiliate himself before the entire town. After this, he can rest assured that the women at the pump will never stop talking about his spectacular downfall — as if a cripple as lowly as Oliver Andersen has any more room to fall. But he does; as he discovers to his horror, he does.

But can Oliver endure? What is it about human nature that causes some to endure and others not? Why do some sink and others rise? Why can some suffer slights to their dignity and others not? The answers to these questions, or perhaps the questions themselves, are part of life’s immortality, as Hamsun declares.

They are part of The Women at the Pump’s immortality as well.