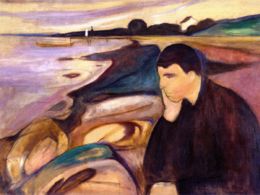 During a livestream on July 2, 2022, I was asked what advice I would give to people who are contemplating suicide. Hyacinth Bouquet transcribed my answer, which I have edited. I want to thank her and the original questioner.

If somebody is seriously talking about killing himself, my immediate reaction is to say, “You must get off the phone with me and call a qualified professional to get some help.” That’s the most important thing that anybody can do if somebody says he is on the brink.

I have known four people who have killed themselves. The first two had psychological issues. One of them killed himself out of depression. The other killed himself out of spite, but he had psychological issues, and he was in a horrible relationship. The third was old, terminally ill, and depressed, so he shot himself. In that case, I can’t really say that I would have talked him out of it, but I certainly would have talked him out of shooting himself in the head and letting his daughter and grandchildren find his corpse. He must have been at very a low point if it didn’t even occur to him how selfish this was. The fourth person was an older woman who’d had a very full life. She was diagnosed with a terminal illness. She booked herself into a hotel, took an overdose of sleeping pills, and left a note with a nice tip for the person who found her body. That’s probably the classiest way to handle it.

I believe your life is ultimately your own. I don’t think there is any “sin” in ending it. No matter how many people love you and will miss you, they’re going to have to get along without you eventually anyway. If you’re terminally ill and you’ve got nothing to look forward to but a painful decline and death, I can understand why you might want to end your life.

But if you are in the prime of life, the pink of health, and of sound mind, and wish to coolly contemplate suicide as a moral question, there are some things I would like you to consider. These are thought experiments inspired by Roman stoicism.

Your lifespan is just the tiniest blip in eternity. Even the longest lifespans — 90 years, 120 years — those are nothing compared to the expanses of time in which you didn’t exist, and in which you will no longer exist. So, why are you in such a hurry? If you’re longing for oblivion, for annihilation, it’s waiting for you; it’s inevitable; you’ll get your fill. Why hurry it? Why not hang around longer and see what happens?

Death is a very scary thing. Most people fear death more than the things driving them to want to kill themselves. There’s something illogical about that. There’s also something empowering about losing your fear of death. If you have gotten to the point where you no longer fear death, then why let any lesser fears stop you? If you don’t fear death, then why fear losing your job or losing your social status? Are these things literally more frightening than death to you? Because that’s how you’re acting. And if you are no longer afraid of death, then doesn’t that allow you to tackle all your lesser fears with renewed courage and vigor?

When you go through this thought experiment, you might decide to live. Your life might, to all appearances, be completely unchanged. You might do all the same things. But their meaning has changed. The realization that you don’t have to do anything, because you don’t have to live, lightens your burdens and makes it possible to enjoy your life more. Unchosen burdens were driving you to suicide, but by choosing not to kill yourself, you’ve now chosen all your burdens as well. You’ve transformed yourself from a suffering patient to a free and responsible agent. As Percy puts it, the ex-suicide now goes to work — and does everything else — because he doesn’t have to.

These are a few thought experiments I have shared with people over the years who were contemplating the issue of suicide. But, again, if someone is threatening imminent suicide, he is probably not in his right mind, so philosophical arguments are the last thing he needs. The best thing you can say is, “Hang up the phone. Call a professional.” Or maybe you should make the call yourself.

» Counter-Currents Radio Podcast No. 463 Riley Waggaman on Russia Since the Sanctions