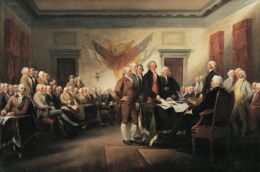 Those terrible, racist white guys who created the United States in action.

Happy Independence Day! Like any other proud American on the Fourth of July, I’ll be grilling hot dogs and burgers with my neighbors before lighting up many kinds of explosions at dusk.

The Preamble of the Constitution of the United states reads:

We the People of the United States, in Order to form a more perfect Union, establish Justice, ensure domestic Tranquility, provide for the common defense, promote the general Welfare, and secure the Blessings of Liberty to ourselves and our Posterity, do ordain and establish this Constitution for the United States of America.

The “ourselves and our Posterity” are ethnically European whites, and there is nothing unjust in that. American Indians were considered distinct sovereign nations, and wanted to be such. According to the Naturalization Act of 1790, citizenship was limited to “whites of good character.”

When asked, historically Americans have said that they do not want more immigration (see Gallup polling data here). When Americans dare take action, however, for example when they passed California’s Proposition 187 in 1994 to limit state benefits to illegal immigrants, it was challenged and overturned in court as racist. Arizona’s similar Proposition 200 from 2004 still stands, but continues to be targeted by at least one pending lawsuit.

Even Thomas Jefferson, who penned “all men are created equal” — which was meant as a rebuttal to the idea of hereditary monarchy and aristocracy — proposed a plan to emancipate and then deport all of America’s black slaves to the tune of $900 million. At the time, this was unfortunately considered too costly and disruptive. As for today, Jared Taylor of American Renaissance informed us in March that 34 members of Congress had proposed to spend $73 billion every year to wage war against racism — which is another name for a war on whites, of course, since only whites are capable of racism.

Before 1964, no one thought America was a “nation of immigrants.” This phrase was only popularized by John F. Kennedy’s essay “Nation of Immigrants,” which was posthumously published in 1964 after being commissioned by the Anti-Defamation League of B’nai Brith. A year later, the Immigration and Nationality Act of 1965 was passed only when it was promised that it would not alter the demographic makeup of the United States. The Chairman of the Senate subcommittee hearings on the bill, Edward Kennedy, said in his opening remarks:

What the bill will not do: First, our cities will not be flooded with a million immigrants annually. Under the proposed bill, the present level of immigration remains substantially the same . . . Secondly, the ethnic mix of this country will not be upset . . . Contrary to the charges in some quarters, S. 500 will not inundate America with immigrants from any one country or area, or the most populated and economically deprived nations of Africa and Asia . . . In the final analysis, the ethnic pattern of immigration under the proposed measure is not expected to change as sharply as critics seem to think. [Lawrence Auster, The Path to National Suicide: An Essay on Immigration and Multiculturalism, page 12 1990, Monterey, Virginia, The Immigration Control Foundation]

There is nothing inherently problematic in the idea of an explicitly white nation. De facto (Estonia) and de jure (Israel) ethnostates already exist. The reclamation of America as a White Nationalist country doesn’t require violence or injustice. We can start by enforcing our existing immigration laws, ending birthright citizenship, taxing remittances, repealing the 1965 Immigration Act that was passed under false pretenses, and providing incentives for repatriation of recent immigrants. (See “Restoring White Homelands” by Greg Johnson, which is Chapter 6 of The White Nationalist Manifesto, available here.)

Establishing an explicit homeland for American whites is easier than you might think — because we already have one.

More from Counter-Currents on American Nationalism: