Our Votes Don’t Matter, But Our Ideas Do 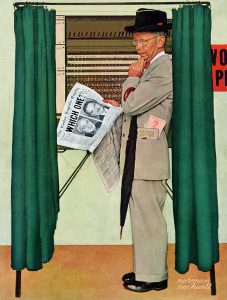 How should White Nationalists take part in American electoral politics?

In the long run, we want our ideas to be hegemonic, the common sense of the whole political system, upheld by all the political parties. We want white interests to be as sacrosanct as anti-racism, diversity, and globalization are to the major parties today. When all parties work to secure our interests, it doesn’t matter who wins elections, because whites can’t lose.

In the still nearer term, I would like White Nationalists to become a voting bloc that is large and powerful enough to swing elections, so that politicians will actively court us and fear to cross us.

So how do we get there from here?

But maybe we’re already there. After all, aren’t some elections close enough for our votes to decide them? And don’t we already constitute a voting bloc?

That would depend on whether enough of our people to swing an election are voters in close districts. Do we know the answer to that question? Because if we don’t, then I don’t think we’re a voting bloc just yet, because we lack at least two important features of voting blocs: we don’t know who we are—and neither do the major parties.

But if we don’t know who we are and what we can do, then the political parties don’t know it either, which means our votes don’t figure into their electoral calculations. We simply don’t matter.

But let’s say we were a real voting bloc. That still doesn’t give us power if we are so widely despised by the rest of the electorate that politicians can gain more votes by snubbing us than by courting us.

White Nationalists like to kid ourselves that we “memed Donald Trump into the White House.” But is that true? Isn’t it possible that the Alt Right cost Trump Republican votes and raised Democratic turnouts? Maybe. Maybe not. But until we can answer questions like that, we’re not really a serious voting bloc.

So if White Nationalists aren’t quite ready for politics, how do we prepare ourselves?

We must identify the necessary conditions for becoming a political force. Then we must assemble those conditions, to the best of our ability. We must begin with things that we can do right now, and we must prepare ourselves to do harder things in the future.

But even if we dramatically increase the numbers of White Nationalists, we will not gain power if we are opposed by even greater numbers. Therefore, in addition to greater numbers on our side, we need less opposition from our opponents, for instance by sowing division among them, by converting enemies into neutral parties, and by converting neutral parties into sympathizers who will uphold the legitimacy of our participation in politics.

How do we achieve these two goals?

We need to change people’s minds. We need to convert enemies to neutrals, neutrals to sympathizers, and sympathizers to committed White Nationalists.

One could argue, of course, that we have been doing a pretty good job without such knowledge. Based simply on introspection and personal experience, a lot of us have become quite skilled at converting people. Furthermore, the rising traffic of various movement websites can be taken as testament to this success.

But how much of this rising traffic is due to our outreach, and how much of it is due simply to the problems endemic to multiculturalism and globalization? How much is rising white ethnocentrism due to our persuasive pull, as opposed to the system’s dystopian push? That is another question that we really need to answer if we are to become serious contenders for power.

To do a serious study of the public mind, we need to create an institution, staff it with people with the necessary skills, and fund their studies.

We also need some sort of institute to craft White Nationalist positions on public policy issues.

Finally, we need a third institution, a political advocacy group that takes the first two groups’ findings and uses them to weld White Nationalists into a self-conscious voting bloc, while laying the foundations for longer-term aims like taking over or founding a political party and eventually establishing hegemony over the entire political system.

There is a word for formulating ideas and creating institutions necessary for the pursuit of political power. We call it “metapolitics.”

There’s another word for pursuing political power without taking care of the metapolitical conditions. We call it LARPing, meaning “live action role playing.” It is play acting.

When White Nationalists on Twitter declare, “We must punish Trump for betraying us” or take positions amounting to: “In order to own the imaginary fascist Trump, I will deliver the presidency to an actual Jewish communist, Sanders,” they are living in a fantasy world. Individually and as a group, we don’t have the power to do any of those things.

In a democratic election, it seldom matters one way or another how a given individual votes, or if he votes at all. After all, when was the last time that an important election was decided by one vote?

Furthermore, as I argued above, White Nationalists have absolutely no idea if we could constitute a real swing vote in close races. And if we don’t know that, politicians can hardly be faulted for ignoring us. Beyond that, we are so widely despised, most politicians would calculate that they could gain more votes by spurning us rather than catering to us.

Some people think that we can gain real power by engaging in grandiose empty talk, because of the manosphere axiom “Fake it ’till you make it.” But that only works when hitting on drunken bimbos. We gain real power by assembling the real conditions of power.

Furthermore, empty talk actually undermines the pursuit of power, because it makes us look foolish, when currently the only real advantages we have in politics are speaking the truth about taboo subjects—multiculturalism, race, globalization, etc.—often in the face of overwhelming opposition, and the credibility we gain from doing that. We shouldn’t be so hasty to throw such advantages away.

Before White Nationalists constitute a real political force, we need to focus on metapolitics: creating institutions and communicating ideas. Thus we need to view electoral politics as a metapolitical opportunity. Our votes don’t really matter, but our ideas matter a great deal.

The eyes of the world will be fixed on the 2020 US Presidential election. In 2015, Donald Trump shattered the political establishment’s agreement never to compete on multiculturalism, immigration, globalization, and anything that touches on white identity politics, lest uncontrollable populist forces be unleased. In 2020, the establishment hopes it can defeat those forces by defeating Donald Trump. The 2020 election really will be a turning point for the USA.

The Left will make the election into a referendum on multiculturalism, race, immigration, and whether America has a future as a white nation. The mainstream Right will, as usual, surrender on all matters of principle. Trump will bluster, fudge, and flounder. White Nationalists—and the broader Dissident Right—will be the only articulate and consistent intellectual champions of nationalism, populism, and the legitimacy of white ethnic interests. These are arguments we can’t lose.

No matter what the outcome of the election, we can emerge as the champions of the more than sixty million mostly white people who voted for Trump in 2016 and may show up again in 2020. Thus we should comport ourselves accordingly.

It is fortunate that the 2020 election is a golden opportunity for presenting our ideas, since it is all we really can do right now. If we want our votes to matter someday, we need to start building the institutions necessary to turn truth into power.