The Yuppie Handbook, 40 Years On 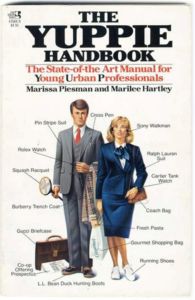 Has it really been 40 years since The Yuppie Handbook? No, its copyright page says it came out January 1, 1984. But the book was so drenched in early-‘80s sensibility that it was already looking dated on its publication date.

Coming back to it today, one gets a pungent whiff of nostalgia and wonderment. Much of it is as bafflingly antique as that fondue kit you got for Christmas in 1979 (still new-in-box, is it?).

Look at the cover and see what I mean. The woman is wearing a boxy-shouldered suit with “Running Shoes.” When was the last time you heard the phrase “running shoes”?

In the early ‘80s, a young woman who wore a boxy “Ralph Lauren Suit” (Paul Stuart or a knockoff, surely?) and arrived at work in “running shoes” was sending out obvious class signals. There was a transit strike in New York City in early April 1980, and people who lived in Manhattan walked to work, often in clunky trainers. Those heavy Adidas and Sauconys became a badge of status, announcing to the world that you weren’t a bridge-and-tunnel loser! The style spread far and wide, lingering for years as a Yuppie marker, long after everyone had forgotten how the fad started.

We can’t laugh at the Sony Walkman; iPods and iPhones were for the distant future. Likewise, the “Fresh Pasta” from Balducci’s or wherever may seem naïve today as a class marker. But it reminds us there was a time, four or five decades back, when it seemed trés sophistiqué to know about “pasta,” as the cognoscenti had begun to call spaghetti and so on. If you were carrying a sack of fresh “pasta,” it suggested you’d gone to a distant neighborhood to buy it.

And now I draw your special attention to the Squash Racquet, the basic Coach Bag, and the Burberry Trench Coat. Coach and Burberry were gilt-edged brands 40 years ago, but few people think of them that way now. They democratized too much, sold their goods in every shopping mall, started manufacturing in Red China. And the Burberry trademark-plaid famously tanked after it became the badge of lower-class “chavs” of southeast England, circa 2005.

The Squash Racquet needs a bit more explaining. The game of squash (or more properly, “squash racquets”) had a big vogue during 1979-1982. In New York, Boston, and Washington DC, new squash facilities sprang up like mushrooms. But then the craze suddenly crashed. It turned out most people didn’t want to play squash! If they needed to knock a little ball around a shoebox-shaped indoor court, they much preferred the prole version – racquetball — played with an ugly little short-handed paddle. Hemorrhaging cash, squash clubs accommodated them and changed their corporate brand. 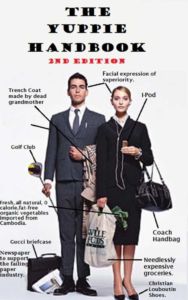 There was a second edition of The Yuppie Handbook (sort of), circa 2006. I don’t think it was a real book; it seems to have been a promotional item given out by a knitwear company. Here we see no squash impedimenta, or even a racquetball paddle. Instead we get a golf club. Bad choice! At this point, the annoying status symbol was a $3,500 triathlon bike.

Gone too is the now-declassé Burberry. It’s been replaced with a plaid-lined “Trench Coat made by dead grandmother.” I suppose the point here is that a unique, handcrafted garment made in 1939 affords more status than a pricey brand. A reasonable point, but it confutes the idea that ostentatious consumerism was the prime marker of Yuppiedom.

Further along, the Coach Handbag is now an oversized “bowling bag” model of the sort that was popular around 2002, although neither it nor the Coach brand carried any cachet. Finally, instead of a Walkman, the lady carries an iPod Nano. Now, the original Sony Walkman was expensive for its day, and often hard to find, but by 2006, everyone had an iPod. No one ever thought of it as an accessory for upscale young “professionals.”

Truly, Yuppiedom faded out sometime in the 1990s, the era when corporate offices began to have Casual Friday dress codes, which soon and inevitably yielded to “Business Casual” slob culture year-round.

And now for the insides. The 1984 Yuppie Handbook was a bait-and-switch deal. The text of the book has little to do with the cover’s promise. It is coarse, tawdry, slapped-together, like something hashed out in a few days from some old cent-a-word porn-novel boiler room.

Even more than its model, The Official Preppy Handbook (1980), it has a noticeable Jewish slant. The chapter on “Organized Religion” consists mostly of jokey comparisons of how Orthodox and Reform Jews spend “the Sabbath.” There are no Catholics, Episcopalians, Presbyterians, or Lutherans within this eruv. Holy Communion for Yuppies means brioche and mimosas for brunch (yok yok yok). 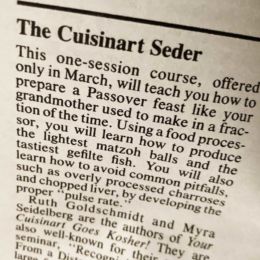 The book never rises above this Borscht Belt level of wisecrack. In a chapter called “Y.U.” (Yuppie University) we get spoof course offerings from The Learning Annex, including “The Cuisinart Seder.”

All this would seem to subvert the book’s advertised purpose. Going by the cover and blurb, the ideal Yuppie objective is to be a stylish member of the Anglo-Celtic haute bourgeoisie, the class celebrated in the fiction of John O’Hara, John P. Marquand, and Sloan Wilson. But that “Cuisinart Seder” clues us in to the authors’ frame of reference.

The Learning Annex, with its ubiquitous course catalogs distributed streetside in newspaper-style racks, was a new fixture of 1980s urban living. As with singles bars, no one regarded it as a Yuppie preserve. But there’s a subtext here. Its courses functioned as a cover for “networking” and hookups, and thus attracted a disproportionate number of Jews. Catalog offerings were heavily weighted toward self-help gurus and pop psychology. They were thus like a downmarket version of EST, with classes that cost $35 rather than $1,350.[1]

Seeking demographic balance, The Yuppie Handbook strives hard to be an equal-opportunity offender. We’re told about exotic subcategories, such as “Guppies” (Gay Yuppies) and “Buppies” (Black Yuppies). Guppies, the authors gush, “are really super Yuppies because they were the pioneers of Yuppie culture.” That is, (male) gays were into ostentatious consumerism and self-preening long before straight folk picked up the trend. Two incomes, no kids, right?

The “Buppies” section is a tooth-grinding read today. We’re told Buppies have “a tendency to name their daughters Keesha instead of Rebecca.” They have a “preference for custom-made suits” rather than “ethnic fashions like dashikis.” And you can spot Buppies because they can talk sort of like white people. Or, as the authors put it, they have “carefully articulated and accentless speech,” which is why “so many Buppies get jobs as newscasters.”

I’m sure we can all think of a couple better reasons.

Straining at gnats, the authors also conjure up “Juppies” (not what you think — they’re Japanese) and “Puppies,” that is, Pregnant Urban Professionals. The authors thought it might be amusing to mock thirtysomething female VPs running around the office (usually to the bathroom) in business-appropriate maternity wear. But they never really explore the idea, they just point and laugh (yok yok yok).

The only people left out of the Yuppie Diversity Tent are normal, everyday Heritage Americans.

The Yuppie Handbook was one of a number of little humor books that came out in the early 1980s, all pivoting around a theme of social-class markers. Some were better than others. It was an identifiable genre of the time. We had The Official Preppy Handbook (1980); the copycat and uninspired Sloane Ranger Handbook (1982) in England; Paul Fussell’s Class (1983), inspired by both the Preppy Handbook and Jilly Cooper’s earlier Class (1979) in England; and then such genre variants as whimsical parodies of L. L. Bean (Items from Our Catalog, More Items from Our Catalog) and The New Yorker.

The most witless of these by far is The Yuppie Handbook. Its authors and producers evidently sold-in the book proposal on the strength of title alone without bothering to find out what made those other books work, what made them stylish or amusing.

The Yuppie Handbook was never really more than a concept (“Let’s do a Preppy Handbook . . . but for Yuppies!”) and a cover illustration. The 8,000 words of drivel on the inside are just filler. Not a spark of wit, not a dram of insight. Usually you can judge a book by its cover, but not this time.

» A Tip of the Trilby: On the Passing of the Dynamic Duo, Meat Loaf & Jim Steinman