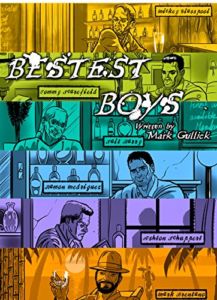 Bestest Boys is Mark Gullick’s first novel, released in 2015. If you’ve ever spent any time in London, the book is a must-read. It’s clearly written with the city’s grit, history, and culture in mind. The protagonist, Mickey Glasspool, and his drinking gang seem to be the personification of the English metropolis.

Mickey is a London bar manager in his 40s. He’s a functioning alcoholic, and descriptions of his morning hangover cure of Tom Collins at 6 AM will make you want to vomit. He lives off the grid; he’s paid in cash and resides on a boat, moored on the edge of a channel off the Thames. Between his boat community, place of business, and the various pubs he frequents, there is a free-flow of information outside the orthodoxy of the city proper and polite society. A general theme amongst Mickey’s milieu is a disdain of being told what to do:

This mindset is exemplified in his drinking gang, the Bestest Boys. They’re described as “an informal collective dedicated to talking and drinking, trying to make sense of an increasingly meaningless world using the twin expedients of discourse and alcohol.” A group of Macedonian politicians comes to mind, planning future empires while heavily intoxicated. The group is of a surprisingly diverse background, ranging from bankers to ex-drug dealers and full-time gamblers.

One of their gang is mortally shot one night during a riot “that the cops had effectively started . . . by shooting a black woman in a wheelchair while ineptly looking for her drug-dealing son.” Relying on their lust for revenge with the aid of acquaintances possessing useful talents, the Bestest Boys set out to settle the score. In doing so, the shooter is identified as a very unlikely individual and a conspiracy is unveiled. It’s the type of sinister machinations more easily noticed in a city than the countryside. Gullick describes the urban landscape as follows:

Have you ever noticed the dirt in London? I mean the ingrained filth, the stuff on the pavement, like nicotined fingers after way too many roll-ups, the stuff even the rain won’t wash away, the filth the hardest rain just floats and moves around.

This description is personified by what the Bestest Boys uncover; their target is protected by uniformed officials, but wanted by the types of individuals who move large sums of money through dummy bank accounts.

One of the story’s best underlying themes are Gullick’s allusions to media manipulation. The protagonist routinely comes across what he identifies as skewing or lying in the papers and on the news. Early on, he states:

I got stuck into the paper. The way the order of the news stories was organised made me think the conspiracy theorists may have been right, the guys and gals in tin-foil hats who thought our minds were being controlled by others. The important stuff was buried deep inside the covers while the main stories were all candyfloss.

Later, he reads about constant newspaper mentions of a particular political affiliation:

The first thing I read was about the return of fascism to parts of Europe, what with various right-wing political parties hoovering up votes in these dodgy new European countries, who were at the same time queuing up to maximise their ride on the EU gravy train.

When the Bestest Boys’ friend dies, the protagonist tells us:

Though the story takes a bit of time to get going, plot twists ramp up as the Bestest Boys seemingly bite off more than they can chew in this modern tale of top-down orchestrated chaos. Gullick must have had a crystal ball; though written only seven years ago, enough loosely similar corruption, prefabricated urban violence, and media manipulation has occurred since its publication that the reader will be able to easily associate with this story. Bestest Boys is a recommended read for anyone interested in fiction outside of the mainstream. Although I will resist the temptation to reveal what occurs, the novel’s aura is best summed up with Gullick’s own prose:

The underworld. It exists, laid over the overworld so precisely you can barely see the join. But you can see it, if you know where to look. Or if someone shows you. You can see it and you can cross the line that separates overworld from underworld. Some people cross over just for a while and come straight back. Some go there whether they like it or not, and some go of their own free will, whatever that is, and they like it and they stay. Others get drawn there, moth-to-flame style.”