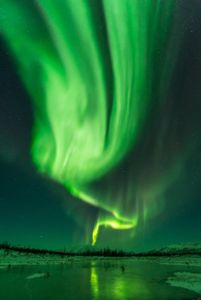 The discovery in the 1960s of a Viking settlement at L’Anse aux Meadows on the northern tip of the island of Newfoundland in Canada is one of the most striking, if little-heralded, findings in the history of European historical research and archaeology. The staggering accomplishment of Norwegian explorer Helge Ingstad and his archaeologist wife Anne Stine Ingstad is far less known than it should be.

The Ingstads furnished the first conclusive physical proof of Norse settlement on the mainland of North America around 1000 AD, as recorded in the Saga of Erik the Red and the Saga of the Greenlanders, written two hundred years after the events took place.

Using radiocarbon techniques available at the time, in conjunction with a close study of Norse history, the sagas, and Helge Ingstad’s vast firsthand experience with exploration and outdoor life in the far north, the Ingstads settled on 1000 AD as the date of the Newfoundland settlement.

In October 2021, a team of researchers at the University of Groningen in the Netherlands pinpointed an exact year for the Viking occupation at L’Anse aux Meadows: 1021 AD: exactly 1,000 years ago this year.[1]

Such precision was made possible by laboratory tests of tree rings in wood samples preserved from the site using a new carbon dating technique: the painstaking detection in wood samples of an anomaly caused by an atmospheric carbon-14 spike of solar origin (the result of a massive solar storm) that left its unique signature in trees living at the time. The particular event occurred in 993–994 AD.

Japanese researchers in 2012 were the first to discover a solar signature of this type in tree rings, identifying what is now known as the Miyake event (named for the scientist who discovered it) or the Charlemagne event, which occurred in 774–775 AD. (In 774 Charlemagne defeated and was named King of the Lombards, a Germanic people who had conquered and ruled the northern and central Italian peninsula for two centuries starting in 568. Originally from southern Sweden and northern Germany, the Lombards gradually converted to Christianity, adopted the Latin tongue, and disappeared through physical assimilation. The northern Italian region of Lombardy, the country’s leading commercial and industrial section, was their stronghold and is named after them.)

After Miyake’s discovery, researchers began combing historical documents for signs of these events.

To cite a pertinent example:

A signiﬁcant carbon-14 enhancement has recently been found in tree rings for the year 994, suggesting an extremely strong and brief cosmic ray ﬂux event. Records of potential red auroras in late 992 and early 993 were found around the world, i.e. in the Korean Peninsula, Saxonian cities in modern Germany, and the Island of Ireland, suggesting the occurrence of an intense geomagnetic storm driven by solar activity.[2]

You can buy Collin Cleary’s What is a Rune? here

Similarly, for the past nine years scientists have debated whether the “red crucifix” that appeared in the heavens over England after sunset, recorded in the earliest important prose work in English literature, the Anglo-Saxon Chronicle, was associated with the Charlemagne event.[3]

The exceptional aspect of the Groningen study is its determination of an “exact cutting year” for three wood samples tested from the L’Anse aux Meadows site:

Our result of AD 1021 for the cutting year constitutes the only secure calendar date for the presence of Europeans across the Atlantic before the voyages of Columbus. Moreover, the fact that our results, on three different trees, converge on the same year is notable and unexpected. This coincidence strongly suggests Norse activity at L’Anse aux Meadows in AD 1021.

The wood samples were taken from the same soil layers as other Viking artifacts, had been cut with metal tools which the natives did not possess, and had the bark still attached (the outer ring of a tree represents its last growth before death, providing the most correct historical age). Finally, the trees from which the wood was taken had lived through the cosmic radiation event of 993, thus preserving the storm’s unique dendrochronological signature. 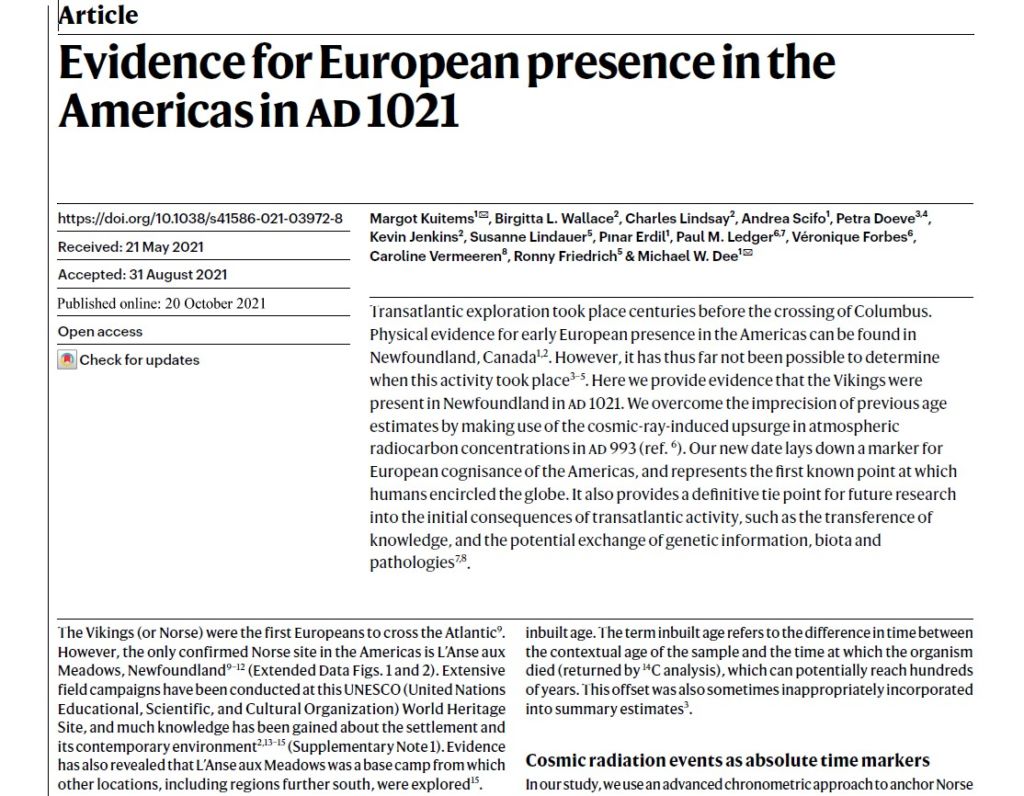 We use an advanced chronometric approach to anchor Norse activity in the Americas to a precise point in time. Exact-year 14C [carbon-14] results can be achieved by high-precision accelerator mass spectrometry (AMS) in combination with distinct features in the atmospheric 14C record. . . . These sudden increases were caused by cosmic radiation events, and appear synchronously in dendrochronological [tree ring] records all around the world. . . . If the bark edge (or more specifically, the waney edge) is also present, it becomes possible to determine the exact felling year of the tree. Moreover . . . one can even determine the precise felling season. (Emphasis added.)

Although polyethylene glycol used in the lab made the felling season (but not year) of one sample undeterminable, a second sample was cut in the spring and the third in the summer/autumn of 1021.

This study is most welcome. It is particularly gratifying that the new dating method was applied to artifacts from L’Anse aux Meadows. The ability to pin down the exact year, and even season of cutting, is fascinating.

However, the discovery does not materially alter the chronological information we already possess about the site.

We now know that 1021 is the year the wood specimens were cut — in two cases, even the precise seasons are identified — but that is not necessarily the only year the site was inhabited. It served as a Viking base camp in the New World.

The “settlement on Epaves Bay, with all its houses, large and small, its smithy, charcoal kiln, boat-sheds, bath-house and cairns,” which so closely parallels others found in Greenland, Iceland, and Norway, strongly suggests an intention to remain more than a single season.[4]

“It seems like each of these three complexes of buildings,” L’Anse aux Meadows’ discoverer continued, “housed a ship’s crew with its own chieftain.” Of one large structure he remarked:

To my mind, the thick cultural layer which could be seen in the trenches could not be the result of an occasional stay here, it must represent the remains of a house. . . . House A had four rooms in a row, and one of the two in the middle was of Norse hall type, with a hearth in the middle of the floor, and raised, earthen benches on either side.

Ingstad observed that, ecologically and materially, conditions at L’Anse aux Meadows during the period the Vikings were there were superior to conditions in Greenland. Yet he believed the Vikings did not remain as long as they had perhaps intended. 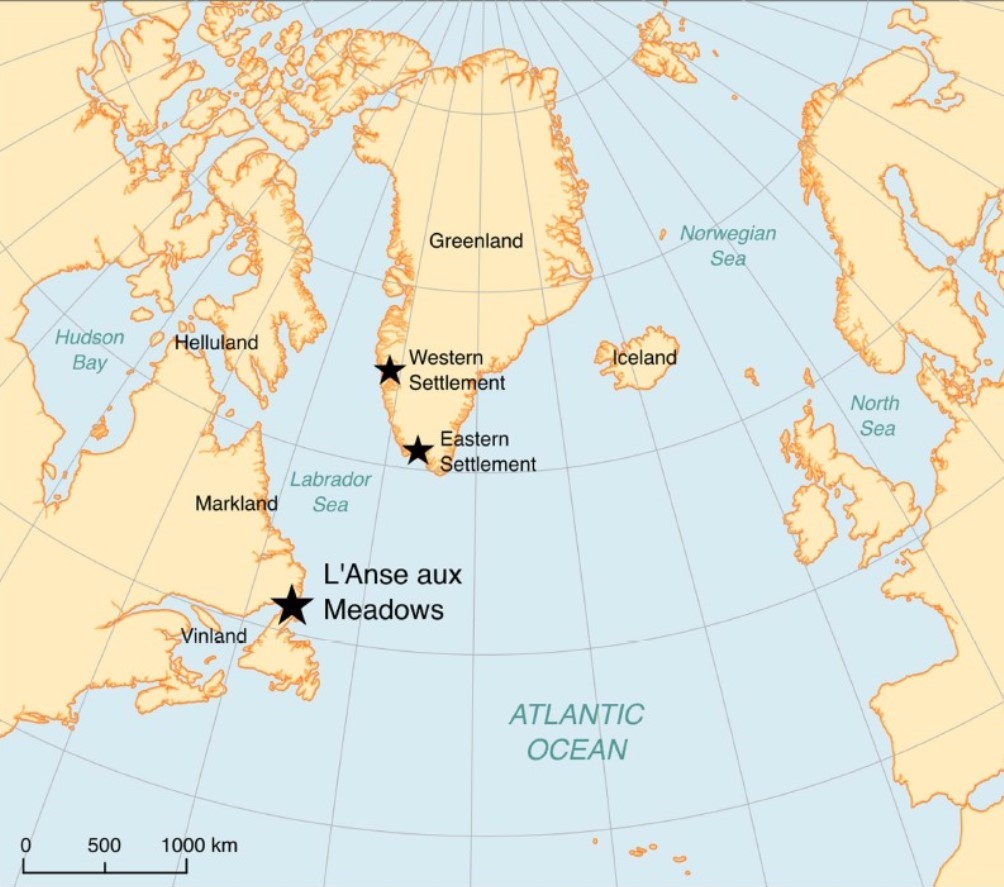 L’Anse aux Meadows on the northern tip of the island of Newfoundland, Canada and its relationship to Iceland, Greenland (showing the medieval Western and Eastern Settlements, both situated on the west coast), the Viking regions known as Helluland (Baffin Island), Markland (Labrador), and Vinland. Here “Vinland” is written over the Gulf of St. Lawrence, the outlet of the St. Lawrence River that flows northeast out of the Great Lakes. L’Anse aux Meadows was strategically situated near the Gulf.

In the 1960s, Helge and Anne Ingstad made a series of carbon-dates of the L’Anse aux Meadows site:

The 14C dates obtained from charcoal, bone and turf from the houses and from other features on the site have yielded a mean date of A.D. 1000. This date agrees well with the sagas’ accounts, according to them, this is the time when the Vinland voyages took place.

The couple also applied archaeological knowledge about the age and nature of the structures and items they unearthed.

In 1989, Reidar Nydal felt that advances in calibration and 14C technology over the succeeding years had made a reevaluation of the original findings necessary. In his paper on the subject, Nydal expressed “[s]incere thanks to Anne Stine and Helge Ingstad, Oslo, for friendly cooperation during several years” conducting his study.[5]

Nydal performed new tests on 13 charcoal samples and wrote “a critical review” of the original L’Anse aux Meadows 14C dates determined more than two decades before. He concluded: “the [new] calibrated age is in the range 975-1020 AD, calculated with an accuracy of 68%.”

Again, it is not known how long the site was occupied, intermittently or for a period (or periods) of years.

Significantly, Nydal mentioned a 1986 Toronto study whose results were closer to the Ingstads’, and now to the 2021 chronology as well. It employed wood samples. It is clear from Nydal’s description that the carefully selected and maintained Parks Canada collection that was utilized in 1986 is the same one accessed by Margot Kuitems and her associates for the samples they tested in 2021. They did not use the same items, presumably, but drew from the same collection.

Nydal summarized the 1986 study: “A separate suite of three wood samples from a cultural layer were recently dated in Toronto with AMS [accelerator mass spectrometry, used again in 2021], for which a mean calibrated age ranged from AD 1000-1020.”

All things considered, the Ingstads in the 1960s did pretty damn good.

[3] E.g., “The Celestial Sign in the Anglo-Saxon Chronicle in the 770s: Insights on Contemporary Solar Activity,” Solar Physics (April 2019).

[4] This and the following few quotes are from Helge Ingstad and Anne Stine Ingstad, The Viking Discovery of America: The Excavation of a Norse Settlement in L’Anse aux Meadows, Newfoundland (New York: Checkmark Books, 2001).

» Soul Plane: How Blacks Depict Themselves When They Think Whites aren’t Watching