I Got the Vaccine Blues 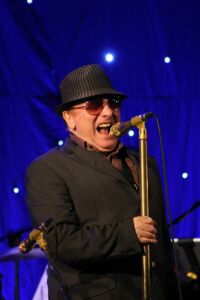 The new groups are not concerned
With what there is to be learned.
They got Burton suits. Ha!
You think it’s funny?
Turning rebellion into money. — The Clash, “White Man in Hammersmith Palais”

Is it not wonderful to see Britain still shining as a beacon of youthful rock ‘n’ roll rebellion, with bands telling it like it is and generally sticking it to The Man? Oh, wait. My mistake. I was thinking of 1979. Now, Albion’s pop stars tend to keep their mouths shut when they are not singing inanities.

Loose lips sink ships, as the old British WW2 motto said. Now, an off-message Tweet and it’s your career that is sunk. Best to stick with woke drivel. Today, in Cool Britannia, if you want your musicians to bite back against the establishment, it seems you have to go to the old guard.

But before we inspect the troops — aka Eric Clapton and Van Morrison, aka Slowhand and Van, aka The Rebels — I mentioned 1979. The late 70s were a spicy time for politically relevant pop songs. The Clash sang about riots, prostitute Janie Jones, London Metropolitan police drug sting Operation Julie, and being a white man in Hammersmith Palais. They were hardly sage, however, as Remote Control illustrates:

Who needs the parliament?
Sitting making laws all day.

Actually, lads, everyone needs the parliamentary principle unless you would rather live in an African shithole. Much as I liked the band, their sloganeering was cartoon-level. The only reason Clash fans have heard of Nicaraguan political thugs the Sandinistas is because Sandinista was the title of the fourth Clash album. Bad move lads, by the way. I have played with Nicaraguan musicians who fled their home country in the late 70s because the Sandinistas hated music.

Leeds band Gang of Four had a song called “Armalite Rifle,” about a notorious gun used by British forces in Northern Ireland. The marvellous Howard Devoto, with his band Magazine, wrote a song about the Kennedy assassination, “Motorcade.”(Incidentally, if that song has never been used as a horror movie score, Hollywood has a tin ear). The Sex Pistols wrote possibly the most Conservative anti-abortion song of all time, “Bodies.”

The astonishing end to that song — featuring Steve Jones’s fiercest guitar work — sees Johnny Rotten pathetically screaming “Mummy!” I defy you not to be moved. Even the fact that a band I personally find dire and you hear all the bloody time here in Costa Rica, UB40, took their name from the form you used to require in Britain to claim unemployment benefits tells you that something metapolitical was in the air as 70s spilled over into 80s.

Margaret Thatcher was not popular with the popsters, with The Beat singing “Stand Down Margaret” and Morrissey beginning his solo career with an album whose final song was “Margaret on the Guillotine.” Politics and metapolitics and pop. Don’t touch that dial.

The Raincoats sang about domestic abuse. Morrissey penned a song about Britain’s notorious Moors murderers, Myra Hindley and Ian Brady. The Jam sang about public school boys (who still, bafflingly, run the UK), British defense spending, and the media. The Stranglers were able to release a song called “I Feel Like a Wog.” Imagine that now from a white band. The Stranglers were the only band, incidentally, that you could actually smell live in 1979 as well as watch.

And since then? Near silence. Modern pop, dominated as it is by the very worst elements of black “music,” hasn’t had a decent (meta)political lyric in years. Marvin Gaye’s song “What’s Going On” has more to say politically in three minutes than the hugely trousered goons and vulgar sluts who provide today’s vile pop doggerel. So, if you want political statement, something rock and roll used to be quite good at, forget the kids. Ask grandad.

Van Morrison, Eric Clapton, and Roger Waters have their craggy features engraved in rock’s equivalent of Mount Rushmore. Recently, they have all stuck their heads above the parapet, making comments and even recording songs that other rock stars would blanch at. Political speechifying is not new, of course. Just look at the singer of the world’s most over-rated band, U2. Listening to what he has to say on any political subject makes me wish he would stick to singing, as wretched as that prospect is. 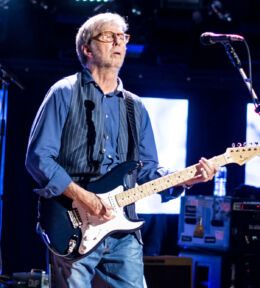 Clapton and Morrison have made a very explicit statement about the naked power grab going on in the UK under the covering fire of COVID. A mention in despatches, however, is due to former Pink Floyd bassist and songwriter Roger Waters. Whatever you think of Julian Assange, Waters’ advocacy has been brave and forthright. But he is the warm-up act for Slowhand and Van.

Van Morrison has been vocal — in both senses — about Britain’s absurd lockdown laws for some time, and now he has something to say about the “vaccine.” I use scare quotes because anyone who has spent more than two or three minutes investigating this snake-oil big pharma money-spinner will know that it is not a vaccine in that it doesn’t vaccinate against but merely ameliorates the effects of COVID-19. Also, and this is the case in Britain so I don’t vouch for elsewhere, but when I worked for the NHS and talked to pharmacists, I was told many times that vaccines had to be tested for seven years, by law. This one seems to have been done in a couple of months. And news of the adverse effects, and accompanying statistics, won’t be coming to a MSM outlet near you any time soon. My Russian friend, with her trademark finality, believes the vaccine jab is nanotechnology designed to micro-chip us all like pet dogs. The way the world is right now, I wouldn’t bet against her. However, music maestros!

Van the Man is a notorious curmudgeon. For my English readers (of a certain age), he makes Victor Meldrew look like Timmy Mallet. For my American cousins, he makes Lou Reed look like Glen Campbell. Now the doughty Irish singer and writer has simply done what he does with regards to the vaccine; he wrote a song about it. Then he got his mate Eric Clapton to record it.

Now, let’s make one thing clear. Van Morrison’s song “Stand and Deliver” is not to be confused with the dire pantomime of the same name by Adam & the Antz. I once served Adam Ant in a Covent Garden restaurant and had a pleasant conversation with him during which I deemed it unnecessary to mention that everything he recorded after the band’s extraordinary debut Dirk Wears White Sox was a great disappointment to me. Even that album had a metapolitical song, “Table Talk” being about Hitler.

No, this “Stand and Deliver” is a serviceable blues piece. I have never been a great fan of Clapton’s voice — it is as though he has no diaphragm, which Van Morrison most assuredly has — and I never went for Cream (whereas I would walk a barefoot mile to listen to Free on a jukebox) but the whole piece could have been an outtake from Exile on Main Street. It has some spit in the guitar and some honky tonk piano. I like it. It points fingers and it makes statements, something the musical youth of the UK have signally failed to do.

Exile on Main Street. That reminds me. Just as Van the Man and Slowhand have stirred up controversy with their anti-vax ditty, that mincing turkeycock who still fronts The Strolling Bones has recorded his own take on an untested medication the deleterious effects of which are being kept from the klieg lights of the MSM. Clarity is required in such an undertaking.

And I can’t understand it.

Jagger roped in Dave Grohl to record “Easy Sleazy,” and I have listened to it so you don’t have to. Jagger seems himself to think it is 1979, and to see himself as some sort of ghost of punk rock past. It is a very strange, toppy, shapeless song, with stray Chuck Berry riffs tacked on like Post-It notes, and in terms of the lyrics, pretty much a dog’s dinner. I would be much more interested to know what Keith Richards thinks of the whole beggars’ banquet that is the British government’s handling of the pandemic. Keith has always been less mealy-mouthed than Mick. When French auteur movie director Jean-Luc Godard famously filmed The Stones recording “Sympathy for the Devil” for a film entitled One Plus One, Keith got to see it before Mick, who asked Richards what he thought of the movie. Keith was clear in his reply. “It’s shit. But we look good.”

Van Morrison, via his mouthpiece Clapton, has a similarly clear message. They put the fear on you, the song opens. There is even an echo of the Pistols’ famous Anarchy in the UK when Clapton sings,

Is this a sovereign state
Or just a police state?

And you will wait a while before some gurning grime artist sings anything as simplistically effective as;

Magna Carta, Bill of Rights,
The Constitution. What’s it worth?

Hey, old-timer. Pull up a chair. Join us.

Of course, when you are worth the combined wealth of Morrison, Clapton and Waters, you have no job to lose, and so your professional freedom of speech is assured. But it is still refreshing to see the old geezers doing the job the boys should be doing.

« In Defense of “Echo Chambers”