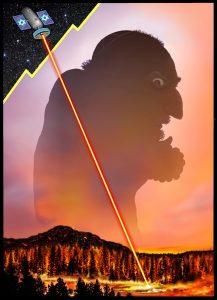 Joe Biden, who is widely acknowledged as the first senile cyborg plagiarist with artificially whitened teeth ever to hold the US presidency, has devised a unique and exciting plan to heal and unite a deeply wounded and divided nation: He intends to persecute everyone on the other side of the aisle until they are either dead, imprisoned, or permanently frightened into silence. With no opposition, there’s no conflict!

To aid him in his historically righteous and righteously historical mission to murder everyone who stands in the way of unity and healing, Biden is enlisting Americans of every creed, color, and genital configuration to snitch on their friends, family members, teachers, and anyone whom they can tag and bag as a racist white supremacist terrorist-insurrectionist.

Thus you have Alaska-based writers who could never, ever in a million years get a writing gig outside of Alaska puking up feeble little essays about how he was struck with nausea upon viewing a “Nazi-themed license plate” in downtown Anchorage and how he was proud to bring it to the public’s attention — because clearly Nazis are a bigger threat to Alaska’s public order than meth-smoking rapist Eskimos.

You have mentally ill young girls who tout themselves as the “liberal lesbian of the family” proudly and publicly alerting the FBI to the presence of three separate family members of hers who attended the Capitol siege on January 6.

Apparently, the public lynchings will continue until morale improves. Everyone who is not with us is 100% against us, and they are so intrinsically evil that even the word “Nazi” is too mild a pejorative.

Loretta J. Ross is not only fat, black, and female — she openly flouts her missing tooth as if to rub her innate mental impairments in your face, as if to say, “Yes, I can be borderline mentally retarded, but not only doesn’t that prevent me from becoming a ‘women’s and gender studies professor,’ it also enables me to write essays for CounterPunch that paint all Trump supporters as terroristic white supremacist ticking time bombs who need to be eradicated by all means necessary”:

The term “Nazi” is not even strong enough to convey the opprobrium and disgust human rights activists feel for those who brazenly claim they are simply patriots with different opinions. From the White House, to the Congress, to the streets, they declared war on democracy. They are seditionists, co-conspirators, and neo-Nazis hiding in plain sight who chose to use whatever power, platforms, and microphones they had to overturn this system of government.

With zero evidence beyond what she probably deems her melanin-fueled blackalicious mystical voodoo powers of discernment, Miz Ross alleges that Republicans allowed Trump to be elected in 2016 because they “can’t stand the glacially slow and righteous empowerment of people of color.”

Isn’t it possible that at least some people, Republican or not, are motivated by a nagging suspicion that people of color are simply glacially slow, and it’s this glacial slowness that accounts for most of their embarrassing underperformance in nearly every known index of human development?

As the federal noose tightens on all forms of dissent, it also has greatly expanded its definition of what exactly constitutes white-supremacist terrorist violence, as a spate of recent arrests now shows the feds’ willingness to corral and defame all opposition — no matter how aggressively such opposition groups distanced themselves from “racism” and “Nazis” — as Even Worse Than Hitler.

Caught up in the recent post-Capitol-siege dragnet are prominent members of the Proud Boys and the America First movement, both of which took extreme pains to distinguish themselves from the odious stench of that indefinable and unphotographable protoplasmic essence commonly called “racism”:

Against this grim backdrop of fear, paranoia, and back-stabbing, I find an odd pleasure in reporting that blacks, gays, and Jews persist in being annoying and whiny in creative new ways.

Perhaps you were unaware that even shellfish hate black children — and it may be related to the fact that dust mites and cockroaches may be among the few living organisms willing to even play with black children.

Somewhere over the rainbow, you will always find a white heterosexual male apologizing for homophobia. The most recent episodes of public self-castration involve a Canadian Dairy Queen owner who was forced to say that he is “truly sorry for the harm we caused” after a worker turned away someone who requested a “Happy Birthday Lesbian” cake. And Justin Thomas, currently ranked the world’s #3 golfer, was forced to grovel and publicly suck a giant invisible dick after screaming the word “FAGGOT!” in frustration after missing an easy putt:

It’s inexcusable. First off I just apologize. There’s no excuse. I’m a grown man. There’s absolutely no reason for me to say anything like that. It’s terrible. I’m extremely embarrassed. It’s not who I am. It’s not the kind of person that I am. . . . I need to do better. . . . I deeply apologize to everybody and anybody who I offended and I’ll be better because of it.

While dragging his undoubtedly saggy balls on whether Americans are ever going to get that $2,000 check — and whether it’s actually a $1,400 check because they fooled you and are deducting that original $600 check from the total — Joe Biden took the time to release an official statement on International Holocaust Remembrance Day, a misnamed holiday that suggests we aren’t being reminded of the Holocaust every other day of the year and twice on Sundays. In a mere six paragraphs, Biden’s ghostwriters managed to squeeze in three instances of “hatred” and one instance of “hate.”

That’s because we’re all children, and “hate” explains everything.

First-time Georgia Congresswoman Marjorie Taylor Greene faced scorn after a 2018 Facebook post of hers emerged suggesting that year’s California wildfires were caused by a deadly laser that was developed in part by “Rothschild, Inc.,” which caused several panicked news outlets to launch into detailed explanations about how all conspiracy theories are rooted in anti-Semitism — which, if you think about it, is itself a conspiracy theory which may backfire, as it tends to blame Jews far more than those who peddle this theory seem to have intended.

For the record, I wish to state that Ms. Greene’s “Jewish Space Laser” theory is preposterous, and it is people such as her who give a bad name to well-reasoned, decent, and law-abiding anti-Semites everywhere.