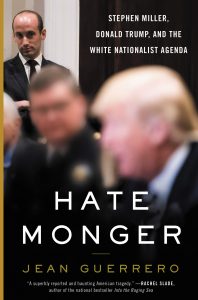 I am going to ignore any detractors on the Right and come out and say that I admire Stephen Miller, the Jewish advisor to President Trump that spent a great deal of time shaping immigration regulations in favor of the white American people for the first time since the 1960s.

In Hatemonger, Jean Guerrero assesses Miller’s career from a hostile perspective. If one ignores the obvious bias, one can see how Rightist metapolitics of the 1990s helped craft a White House and West Wing in 2016 whose occupants helped America more than any other in recent memory.

Stephen Miller was clearly shaped by his experiences at the racially diverse Santa Monica High School. In the 1960s, proponents of racial integration claimed that whites exposed to non-whites as children would become “prejudice”-free. This was wrong, and has always been wrong. Wherever white meets the blacks and browns, white racial awareness increases. Blacks and Mestizos have considerable social pathologies and that fact eventually gets noticed.

According to Jean Guerrero, Miller was influenced by the conservative radio program The Larry Elder Show and Rush Limbaugh’s bestseller, The Way Things Ought to Be (1992). Miller rose to prominence when he called into Larry Elder to mention that Santa Monica High didn’t recite the pledge of allegiance. Miller plausibly claimed the school was a hotbed of anti-American Leftism. Indeed, a Canadian teacher had stood upon an American flag and smirked — it was supposed to be a lesson in understanding the power of symbols, but instead was interpreted as an insult against white Americans.

Miller’s appearance on Larry Elder and other Southern Californian radio shows brought him to the attention of David Horowitz, thanks to the area’s infamous media saturation.

David Horowitz is a prolific author and a former member of the New Left of the 1970s. However, one of his white friends was murdered by Black Panthers. The perpetrators were never brought to justice. At the time, the white Leftists that supported the Black Panthers were so mentally trapped by Negro Worship that they couldn’t go to the police to report Black Panther crime. This event caused Horowitz to re-evaluate the morality of Communism, Leftism, and the greater “civil rights” nonsense that he was supporting.

Horowitz is Jewish, but he believes that Anglo-Protestant Christians are central to American identity and Anglo-Christians threatened by the social revolutions of the 1960s as well as the “Clash of Civilizations.” He created an organization that engaged in activism at universities and his website FrontPage Mag.

Miller was accepted into the elite Duke University. While there, he remained in contact with Horowitz and was involved in Horowitz’s pro-Iraq War, pro-Israel, and (neoconish) Right-wing activism. This often consisted of speeches hostile to on-campus groups that were Left-leaning and sympathetic to Palestinians. Miller teamed up with Richard Spencer, who also attended Duke at that time, to invite Peter Brimelow to debate a pro-immigration activist.

Then came the Duke Lacrosse Affair. In 2006, the Duke men’s lacrosse team threw a party where they hired some strippers. (This was a bad idea to start with, but I digress.) Both strippers ended up being sub-Saharans. This turned out to be a disappointment for the team, since African women are less attractive than white women. Rude remarks were made, and one of the strippers went to the police and claimed she was raped.

The affair attracted national attention because it fed into the narrative that underpins the illicit second constitution that is the 1964 Civil Rights Act: all whites are oppressing all morally upstanding blacks, all the time. A subset of this nonsense is the false belief that black women are desired as sexual objects. The establishment at Duke exploded into a frenzy of moral virtue signaling. The district attorney already had DNA evidence clearing the team of wrongdoing, but hid this fact until he was safely re-elected by a coalition of sub-Saharans and Leftists.

The affair affirmed pro-white talking points. Sub-Saharans, for example, weren’t oppressed, they were coddled. The event also proved that Leftists had a warped belief system, couldn’t read data, often lied, and were unable to administer justice.

Miller then became the press secretary for Michelle Bachmann during her 2012 presidential primary run. Bachmann’s run was unsuccessful, but her ideas spread throughout the Republican Party. Miller also worked for Alabama Senator Jeff Sessions. After Obama’s re-election, Miller and others, like his friend Steve Bannon, argued that the Republican Party should become more racially conscious rather than less.

This turn of political strategy is exactly what Peter Brimelow predicted in his 1995 classic Alien Nation:

As [the] white voting bloc is reduced in relative size, ever more intense incentive will be offered enterprising politicians of all ethnic groups, including, perhaps, the almost-majority whites, to whip their own supporters into line in order to marshal their vote. Supreme power in American politics will have come within grabbing range — no longer for any one bloc but for an unstable, jockeying combination of them.

When Donald Trump came down the escalator and announced his run for president, Miller jumped on the opportunity to get on the team. He had to work hard to be accepted — there was considerable name dropping and self-promotion. Once he was on the team and Trump was elected, Miller took his considerable knowledge of immigration law and created a series of regulation changes that restricted both illegal and legal immigration.

There are plenty of insights to be gained from this book. First, a considerable number of Hispanics are not really into being thrown into a “blacks and brown” coalition. There is a large group of them — often derisively called malinchista in Mexico — who prefer European customs and identify with Spain and Western civilization. Many Hispanics are ethnically white and on our side — not all, of course. Second, Miller was able to advance through hard work and self-promotion. He carefully studied the internal dynamics of the Trump administration and stayed on the team even as others fell out and were fired.

We would do well to imitate David Horowitz’s cultivation of young talent. There is probably some Jewish nepotism in the relationship between Horowitz and Miller, but this nepotism was effective and bears close study.