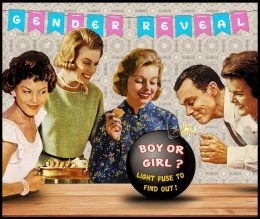 I’d been vaguely and reluctantly aware of the term “gender reveal party” for years, and without bothering to look into it, I always presumed it was some wacky sort of shindig that trannies threw when they wanted to expose their shiny new $100,000 surgical cybernetic genitals to their friends, family, clergy, therapists, nieces, nephews, probation officers, and meth dealers.

How wrong I was!

It wasn’t until yesterday — when, intrigued by the story of an upstate New York man accidentally killing himself while building an explosive device for a gender reveal party — that I learned this is something that normal, unexceptional, and often morbidly obese heterosexual couples do to announce that the sonogram results show that the fetus is undoubtedly a boy or a girl — none of this “gender they were assigned at birth” or “one’s gender and one’s sex are two entirely different things” gobbledygook for these red-blooded, fag-hatin’ American breeders, nuh-uh, no way.

As a homo writer for a homo website once opined, “If there’s two things straight people love its [sic] sports and gender reveal parties.”

On February 21, 28-year-old father-to-be Christopher Pekny of Liberty, NY, was killed in the midst of assembling some sort of pipe bomb for his still-embryonic spawn’s gender-reveal party. His brother Michael, 27, was injured in the blast. Their older brother, Peter Pekny — try saying that ten times fast — told the New York Times that the fraternal tragedy was “the freakiest of freak accidents that I could ever imagine.”

It was to me, too, Peter Pekny, until I read up on the subject. As far as I can discern, gender-reveal parties have killed and maimed more people in the past few years than “white supremacy” has. Who knew?

Only twelve days before the Pekny brothers’ gender-baby pipe bomb blew Christopher Pekny to smithereens, 26-year-old Evan Thomas Silva was struck and killed by shrapnel from a small antique novelty cannon in Gaines Township, MI in the midst of, you guessed it, another gender reveal party that turned fatal.

And if their fathers did it for attention — say, for Instagram likes or YouTube views — can anyone blame their children for being ashamed?

Why are they using bombs, you might ask? Because it’s not a truly bitchin’ gender reveal party unless you blow something up and the smoke turns out to be either pink or blue. I remember back before fetal sonograms when proud fathers gave out cigars if it was a boy and left it at that. I’m not sure if they gave out anything if it was a girl — things were actually that wonderful a half-century ago when the vestiges of a true patriarchy still existed.

In October 2019, a 56-year-old wife, mother, and grandmother named Pamela Kreimeyer was instantly killed by flying shrapnel that was hurtling with such force that it finally landed in a field over 100 yards past where it slammed into the woman’s head and killed her. Although it’s unclear what her relation was to the unborn fetus, the hapless Ms. Kreimeyer was attending a backyard gender reveal party in the humble burg of Knoxville, IA when an improperly assembled explosive device exploded improperly. It is alleged that the unborn child’s parents had intended to film the event for social media. The day after Kreimeyer’s death, another gender-reveal bomb exploded in Iowa with such force that people felt it two miles away, although there were no injuries reported.

At a 2017 gender reveal party in Ohio — which turned out to be a fake party, because the “pregnant” woman in question turned out to be lying about her pregnancy — one woman was fatally shot, bullets blinded her husband in one eye and left him brain-damaged, and their two children were shot but survived. The woman who claimed to be pregnant was white and was shot in the thigh; her accused shooter, Vandell Slade, is black, and I note both his name and his race only because black people give their children undeniably funny names.

Since they tend to involve incendiary devices because people apparently aren’t content sending out Hallmark cards to announce life-changing events anymore, gender reveal parties have resulted in several devasting wildfires. In April 2017, an off-duty Arizona Border Patrol agent named Dennis Dickey shot a “high-velocity firearm” that exploded an object containing a blue powder — it’s a boy! But he did it in the middle of a field that immediately was set ablaze and resulted in what was known as the “Sawmill Fire” — torching 47,000 acres and causing $8 million in property damage.

That same month, a fire that started at a Florida gender reveal party incinerated 10 acres.

In September 2020, a “smoke-generating pyrotechnic device” at a gender reveal party in Yucaipa, CA, burning over 20,000 acres, destroying 10 buildings, and, depending on whom you ask, killing anywhere from one to 25 people. It became known as both the “El Dorado Fire” and the “Gender Reveal Fire.”

A Louisiana man almost got his hand bitten off while attempting to feed an alligator a watermelon filled with blue Jell-O at a low-rent backyard gender reveal party. A low-flying crop duster crashed in Texas in the midst of dropping 350 gallons of pink water on a field during a 2019 gender reveal. A New Jersey dad-to-be broke his ankle on Father’s Day in 2018 after kicking the pink powder out of a football to the delight and horror of friends and loved ones. And if the audible laughter is any indication, friends and loved ones were mostly delighted when an expectant dad who intended to shoot blue powder out of an air cannon shot himself in the balls instead, possibly neutering himself and making this the last of his gender reveal parties.

When did this madness begin?

Most sources trace the birth — or is it explosive afterbirth? — of the gender reveal party to a blogger named Jenna Karvunidis, who in 2008 revealed that her fetus would be born a girl. Her “reveal” was accomplished via pink frosting inside a party cake that she filmed and posted to social media, where it garnered her more attention than she’d probably had in 10,000 previous incarnations.

The trend spread like herpes through social media outlets as attention-starved couples sought to outdo one another with pyrotechnics and theatrics at the crucial and climactic “reveal” segment of the party, which often comes after much guessing and silly “Team Pink” and “Team Blue” parlor games.

Although research suggests that gender reveal parties are predominantly a white, middle-class, American phenomenon, the alleged “Biggest Gender Reveal Ever” involved a pair of “Saudi Arabian influencers” who in 2020 paid an estimated $100,000 to have the world’s tallest building — the Burj Khalifa in Dubai — lit up bright blue to announce the pending arrival of their baby boy. As of this writing, the YouTube video for their extravagant gender reveal has racked up more than 33 million views.

But not everyone has that kind of cash, so they’ll risk blowing off their face in exchange for clicks and likes.

If you’re not stupid or brainwashed, you’d realize that the only lesson here is that you shouldn’t be so hungry for attention that you risk crippling yourself or having your child raised by a single parent and having that child grow up to hate you for being a fucking idiot.

But there are, mais bien sûr, those who want to make even this into a sociopolitical issue. These are the killjoys who can’t just sit back and enjoy the slapstick, those who warn us that the real danger is that gender reveal parties perpetuate that transphobic “myth” that “boys” and “girls” exist and that when a woman becomes pregnant, the FIRST thing most people want to know is whether it’s a boy or a girl.

After 2019’s Gender Reveal Fire in California, Jenna Karvunidis — Earth Mother of the Gender Reveal Party — stated on Facebook that she wished she’d never birthed this trend since not only did it lead to death and destruction, it led people to think it matters whether the baby will be a boy or a girl:

Oh my god NO. The fire that evacuated parts of California is from a GENDER REVEAL PARTY. Stop it. Stop having these stupid parties. For the love of God, stop burning things down to tell everyone about your kid’s penis. No one cares but you. . . . Who cares what gender the baby is? . . . I did at the time because we didn’t live in 2019 and didn’t know what we know now — that assigning focus on gender at birth leaves out so much of their potential and talents that have nothing to do with what’s between their legs. . . . Toxic masculinity is men thinking they need to explode something because simply enjoying a baby party is for sissies.

Karvunidis also recently “revealed” that her baby girl whose imminent birth launched this deadly trend in 2008 is now a girl on the cusp of adolescence who wears suits and cuts her hair short.

Predictable. These social-media moms bunny-hop from one trend to the next.

Back here on Planet Earth, we realize that gender reveal parties have killed far more people, wrecked many more families, torched much more property, and devastated unforgivably large swaths of this once-beautiful land in the past few years than the imaginary demon bugaboos of “transphobia” and “white supremacy” could ever hope to destroy.

After all, shouldn’t terrorism involve at least a few crudely made bombs?

Until we realize that gender reveal parties constitute the true domestic terrorism, we will limp through a smoke-hazed battlefield as a pathetic, battered, and confused nation.