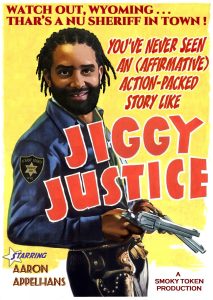 As a bookish kid holed up in my bedroom, I used to pore over the family copy of the World Book Atlas of the World and found my interest especially piqued by desolate and depopulated areas. I was drawn to Canada’s Northwest Territories and Wyoming in the USA — I remember being fascinated that Wyoming had entire towns with only five residents.

With barely over a half-million people, Wyoming has fewer residents than any other American state. It is also the least densely populated state in the continental USA. It has fewer residents than Washington, DC, despite being over 1,400 times larger in square miles. There are more than ten times as many people in the Atlanta metro area alone than in the entire state of Wyoming.

Except for the magnificent Yellowstone National Park in its northwestern corner, the Grand Tetons slightly south of Yellowstone, and Devil’s Tower on the South Dakota border, Wyoming mostly consists of frozen howling desert plains — a friend once described the state as “Mars with wind.” No one ever, ever thinks about Wyoming except people who live there. In that regard, it’s even worse than Canada.

At last count, Wyoming has slightly under 12,500 black residents — fewer than any other state in the USA.

Since there aren’t too many other black people around waiting to kill them during a petty dispute involving who ate all the pork rinds, Wyoming is a relatively safe place to be black.

Despite this, the powers that be are hell-bent on making Wyoming blacker — and therefore much less safe for everyone, especially black people.

These are the same people who never complain that Detroit is “too black” or that Hollywood is “too Jewish” — but Wyoming is definitely “too white.” We need to make it black, just as we need to shlep Syrian refugees to Idaho so they can gang-rape five-year-old white girls.

You can’t just let them have Wyoming?

Of course not — what poses as “justice” these days is actually neocolonialism in its cattiest and most baldly triumphalist form.

There are an estimated 650 black people in Albany County, WY, which works out to about one black person for every six-and-a-half square miles. To put it in perspective, the Georgia county where I live crams 265 blacks into each square mile.

Sucking up nearly all of Albany County’s population is the city of Laramie, which is widely regarded as the state’s most liberal city.

It’s strange, then, that Laramie is where the only high-profile “hate crimes” I’ve ever heard of in Wyoming occurred.

What’s not so strange is that both of these “hate crimes” turned out to be hoaxes.

By far the most famous of the pair of faux crimes haineux is the beating death of Matthew Shepard in 1998. Right out of the gate — despite any evidence beyond the fact that Shepard was gay — the narrative was that the tiny, frail, effeminate Shepard was attacked by redneck homophobes. Bill Clinton denounced the killing as an act of hate, and Barack Obama included Shepard’s name in his Hate Crimes Prevention Act of 2009.

But in 2013, a gay journalist named Stephen Jimenez — who originally approached the project convinced that the official narrative of Shepard’s slaying was legitimate — wrote a book convincingly debunking the “homophobia” theory. After interviewing more than 100 people close to the case, Jimenez concluded that Shepard and one of his killers had previously had sex and that both worked as male prostitutes to feed their meth addictions. Curiously, Laramie police ran with the “homophobia” narrative without interviewing anyone in the town’s gay community. Jimenez’s interview with the officer who first apprehended one of Shepard’s killers yielded this golden nugget:

I believe to this day that McKinney and Henderson were trying to find Matthew’s house so they could steal his drugs. It was fairly well known in the Laramie community that McKinney wouldn’t be one that was striking out of a sense of homophobia. Some of the officers I worked with had caught him in a sexual act with another man, so it didn’t fit — none of that made any sense.

The second — and much less ballyhooed — “hate crime” to emerge in Laramie was the police shooting of a schizophrenic 39-year-old man named Robbie Ramirez in late 2018. After reviewing evidence in the case, Wyoming’s Department of Criminal Investigation released a 73-page report that revealed Ramirez had 98 contacts with police since 2003 — at least ten of them involving schizophrenic outbursts and violence to others, including police officers.

The cam footage of the incident that led to his shooting shows a white police officer making a traffic stop. Ramirez refuses to roll his window down at the officer’s instructions, then peels away and flees the scene. The officer, Derek Colling, followed Ramirez as he pulled into an alleyway next to his apartment building. It also shows Ramirez engaged in fisticuffs with Colling. News stories routinely described Ramirez as “unarmed,” but I’m pretty sure I saw him attacking Colling with his arms. But because Ramirez was schizophrenic and Hispanic, it became an Automatic Hate Crime.

Of course, last summer as the world burst into flames over yet another fake hate crime — the death of George Floyd — Laramie’s half-dozen or so black skateboarders, surrounded by dozens of self-hating white enablers — took to the city’s sparkling-clean streets to demand JUSTICE FOR ROBBIE.

According to the Associated Press, the shooting of Robbie Ramirez “played a major role” in last December’s appointment of Aaron Appelhans as sheriff of Albany County — which makes him the first black sheriff in Wyoming’s history.

Mind you, way back in 1966, the City of Cheyenne appointed a black cop named James Byrd as its chief of police at a time when Byrd was the only black cop in the entire state. Stylistically, Byrd seemed a bit old-school and willing to assimilate — even into the 1980s, he sported a cowboy hat in what I reckon is the state with the highest cowboy-hats-to-people ratio in the USA.

(In a mystifying coincidence, James Byrd was the other person along with Matthew Shepard in the name of Obama’s Hate Crimes Prevention Act. But it was a different James Byrd — the black man who got dragged to death behind a pickup truck in 1998.)

Aaron Appelhans is clearly not the same kind of black cop that Wyoming’s James Byrd was, though. His thick beard and braided hair make him look like either an aspiring rapper or an aspiring NFL defensive lineman. And he says all the right things about social justice and police accountability.

And now he is the unelected sheriff of a county whose seat is the second-safest city in Wyoming, which is the fifth-safest state in the USA.

And he talks about police reform? Sounds like Wyoming police are doing a pretty good job already, no?

It’s not exactly clear why his appointment as sheriff became a recent AP press release that was picked up by Drudge Report and several major media outlets, seeing as he became sheriff back in December. The AP story claims that Appelhans, 39, “grew up near Denver experiencing racism.”

After he was appointed Albany County’s interim sheriff — the former sheriff, Dave O’Malley, resigned before his term was up — Appelhans “experienced racism” once again in the form of a tweet by Wyoming state legislator Cyrus Western — his surname can’t be coincidental, can it? Western had included a meme featuring Cleavon Little — first black sheriff of the fictional Western town of Rock Ridge in Mel Brooks’s Blazing Saddles — saying “Where the white women at?”

In case this is all getting too complicated, I’ll summarize:

Aaron Appelhans — who says he experienced racism as a child and, as a result of a lighthearted if ill-advised tweet continues to experience racism as Wyoming’s first black sheriff — will now oversee a county where there have been two high-profile hate-crime hoaxes and where the county’s handful of black residents are statistically safer than they’d be almost anywhere else in the USA.

As far as I can tell, the only “hate crime” here is the systemic one against Wyoming’s vanishing breed of white cowboys and cowgirls.