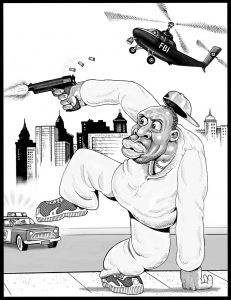 Maybe it’s because I’m a racist, but I get intrigued when I hear that a part-time rapper who calls himself “Casanova” gets indicted on federal charges along with 17 other members of a street gang calling itself “Untouchable Gorilla Stone Nation.”

Proof that I’m a racist is that I find it funny whenever black people refer to themselves as gorillas.

Casanova is the only member of his crew who at the moment is not in custody. He is rumored to be skulking around somewhere in the Atlanta area, and if I see him buying chicken wings at a local Kroger, I’ll make sure to tell him how funny I find that whole “gorilla” thing.

One of the federal indictments involves another member of Casanova’s gang allegedly murdering a 15-year-old in Poughkeepsie, NY this September. Although the race of the victim, Jelani Jones, was not mentioned, I’ll play the numbers and assume Jelani was black.

Then I got to wondering about who, exactly, terrorizes black communities more — white cops, or the street thugs who murder far more blacks every year than cops could ever bother to slay and who keep the rest of the hood terrified into abject silence because they fear retaliation for snitching?

One hears a fair amount about black street gangs such as the Crips and Bloods, but very little about how these are essentially criminal syndicates who span the country and whose membership is almost entirely black. You probably are unaware that the Bloods formed in LA partially as a reaction to predatory behavior by Crips against the black community, especially a 1972 incident where 20 Crips beat a black man to death outside of a Curtis Mayfield concert for refusing to surrender his leather jacket. You may not be aware that Crips and Bloods have infiltrated the US military, but that’s likely because the media have focused your attention on that one white Marine who was discharged for having a Viking tattoo.

But although Crips and Bloods have done a far more efficient job of killing black people than the police have for the past 50 years, there are several other black crime syndicates who are probably hatin’ on Crips and Bloods for snagging all the attention.

Due to my incurable racism, I’m going to assume that whatever illiterate toad who named the Untouchable Gorilla Stone Nation was attempting to pay homage to the Black Guerilla Family, a black-nationalist prison and street gang whose roots go back further than the Crips and Bloods. The Black Guerilla Family identify as Marxists and Garveyites. One of their members murdered Black Panther icon Huey Newton in 1989.

There’s also the Black Mafia, AKA the Philadelphia Black Mafia, Muslim Mob, and Black Muslim Mafia, founded in 1968. They’ve racked up over 40 murders, with most of the victims presumed to be black because statistics show that no matter how much black people might love killing white people, they love killing their own even more. Philly’s Black Mafia were instrumental in the city’s heroin trade and even used a local mosque to fence their drugs.

The Detroit-based Black Mafia Family was founded by two brothers who extended their cocaine operation into other cities and were devoted followers of the Five Percent Nation, a wackadoodle black-power group that cribs some of the Nation of Islam’s kookier tenets, such as the idea that blacks have existed for 66 trillion years, whereas whites were created by an evil scientist only 6,000 years ago.

Then there are groups and individuals who don’t even care about making some ducats through organized crime and instead devote themselves to killing white people.

San Francisco’s “Zebra Murders” involved a group of black Muslims who referred to themselves as “Death Angels” and killed at least 15 white people over a six-month span from 1973 to 1974. Some estimate that they may have killed as many as 73 whites, with one criminologist stating that “Death Angels may have killed more people in the early- to mid-1970s than all the other serial killers operating during that period combined.” Others speculate that the Zebra Murders were part of a nationwide conspiracy to kill white people.

Over the course of eight days in late 1972 and early 1973, a disgruntled former Black Panther named Mark David Essex, who’d been discharged from the Navy due to “character and behavior disorders,” vowed to kill “just honkies.” During one of his two shooting sprees, he reassured a black hotel chambermaid thusly: “Don’t worry, sister. We’re only shooting whites today.”

In 1986, a black former football player named Robert Rozier killed four white people in four separate incidents in an attempt to appease Yahweh Ben Yahweh, another black-supremacist fruit loop who encouraged the murder of white devils. In one of the murders he committed with an accomplice, Rozier cut off the ear of a white man to offer as proof to their exalted leader that they’d killed a devil, lost the ear while returning home, then brazenly returned to the bar parking lot and sliced off the victim’s other ear.

Over the course of a few months in 2002, two black men named John Allen Muhammad and Lee Boyd Malvo deliberately murdered 17 white people — ten of them in a spree that became known as the Beltway sniper attacks. A detective who interviewed Muhammad stated that “Muhammad’s goal in Phase One was to kill six white people a day for 30 days.”

In 2010, at a Connecticut brewery, a black man named Omar Lee Thornton opened fire on coworkers — all of them white — killing eight of them before shooting himself. Before committing suicide, Thornton had allegedly told his mother and white girlfriend that he killed white people as revenge for their racist treatment of him at the brewery. But it’s no coincidence that Thornton started picking off white people with bullets as he was being escorted from the factory after surveillance cameras caught him stealing beer.

And yet none of these racially motivated killings inspired nearly as much outrage as Dylann Roof’s 2015 murder of nine black churchgoers in Charleston, SC. They definitely didn’t inspire a nationwide demand to erase all public displays of in-your-face black nationalism like Roof’s rampage led to howling outcries demanding the removal of all Confederate symbols from public view.

Besides Dylann Roof, I’m drawing blanks about equivalent atrocities. Atomwaffen was linked to five murders, but as far as I can tell, all of their victims were white or Jewish. There was the lone wolf who killed 11 Jews at a Pittsburgh synagogue, but Jews will be the first to tell you that they aren’t schwartses.

And besides the Aryan Brotherhood — who exist almost entirely as a prison self-defense gang — I can’t think of another white criminal syndicate in existence that makes a point of being white. Sure, there’s the Italian mafia, but they exclude anyone who isn’t Italian, and it’s still arguable whether Italians are white.

The most recent available FBI crime stats show that when you subtract “Hispanic or Latino” from the definition of “white,” a mere 56.5% of white homicide victims were slain by other whites, whereas 88.8% of black murder victims were killed by other Negroes. In raw numbers, blacks kill 220% more whites than the inverse — a disparity that becomes much more severely skewed when you consider that whites still outnumber blacks by about 5.5 to 1.

And yet all the media shove down our gullets is endless propaganda of an imaginary wave of white racist violence. While promising to classify Black Lives Matter and Antifa as terrorist organizations, Donald Trump failed to deliver on that promise. Instead, his DOJ proclaimed that white terrorism was the nation’s biggest threat. And after blacks rioted nonstop for months following George Floyd’s death, Trump’s response was to pay them ransom money of $500 billion in the form of his “Platinum Plan.”

I can’t think of any extant white-power criminal syndicate, because the former members of these extinct groups are all doing federal time. And the most recent stats I could find about race and gang membership show that blacks and Hispanics are overrepresented by a factor of three, whereas white gang members — none of whom, to my knowledge, make a point of being white — are underrepresented by a factor of six.