Pick a Side: Deconstructing the Boot Licker 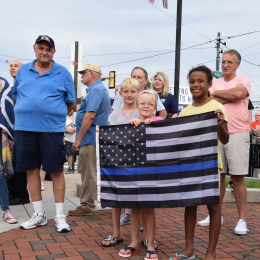 Terrorism is at times a nebulous concept, but a useful definition is the use of force or the threat of force to coerce populations and governments, usually for political or religious ends. Using that definition, America has undeniably been terrorized by the dregs of society for the last six months in an unceasing campaign of domestic terrorism. During this time, except for a few isolated pockets that retain civilized law and order, the police and other law enforcement entities have done next to nothing. Diners have been harassed and even assaulted, businesses burned and looted, and people have even died, including the elderly and small children. Typical of terrorists, they have a callous disregard for human life. For example, to BLM and Antifa, the life of black eight-year-old Secoriea Turner didn’t matter, it was simply acceptable collateral damage. And when whites die, it’s something to celebrate.

Before these outbursts of feral savagery, businesses have oftentimes boarded up in a desperate attempt to save themselves, which shows that these outbursts are not entirely unforeseeable. Like category 5 hurricanes, category 5 chimpouts can be difficult to predict weeks in advance. However, they are still predictable within a few days, or at least hours. In some places like Portland and Minneapolis, they should be assumed to be an ongoing phenomenon. Thus, law enforcement from the city level up to the DHS and (((FBI))) have had ample time and opportunity to study these outbursts and develop appropriate countermeasures, and then implement those countermeasures. Such countermeasures need not be complicated. Bringing the weight of law down whenever these malcontents start to act up has proven to be effective.

Take, for example, how on September 23, in San Clemente, California, another “unarmed black man” Kurt Reinhold was shot. He was homeless, and supposedly legally blind. The fake news conspicuously omitted that he had been thrashing around like a feral beast and reaching for an officer’s sidearm. One would have expected San Clemente to have been torn apart by rioting savages. However, it has not been. Many people never even heard about it. This is because the OC Sheriff’s Office stoically did their job and at the first sign of trouble from the BLM protest shut it down and made arrests. They put people and patriotism ahead of politics. This proves that BLM and Antifa can be easily rebuked with basic countermeasures if one has the will to act with basic manhood.

Most municipalities have done the exact opposite. There are numerous excuses why: corrupt Soros-backed DAs, fear of Jewish-funded lawfare, and the screeching of triggered thots and Bantus. However, these are all excuses, not reasons. These officers involved took an oath to protect and serve the public. It’s difficult to point at a specific date when, but sometime by the end of 2020’s summer of rage, most of them became oathbreakers. Perhaps reluctant oathbreakers who understandably feel that they are trapped between a rock and a hard place, but oathbreakers nonetheless due to their total failure to protect and serve the public. This is exacerbated by how they continue to protect and serve rich neighborhoods, big corporations, and federal buildings, but not the American people who not only pay their paychecks, but who have also unreservedly adored them through thick and thin.

Even more insulting is how if the police were abolished as the Left demands, we on the Right could do a far better job of restoring law and order. The American people are ready, willing, and able to do far more than merely tweet “Law and Order” as Trump does. The only things protecting the faces of rioting communists from patriot fists are the police and lawfare. In a civilized era, Kyle Rittenhouse would have been lauded as a hero even as Horatius was. Instead, the oathbreaking police arrested him, knowing full well that they were delivering him into the clutches of the Talmudic (in)justice system.

Thus, this unreserved praise has now become mostly undeserved. However, for some reason, “boot lickers” on the right continue to chant “Back the Blue” even as the Blue exclusively backs subhuman dregs while pouncing like rabid animals on patriots the second they even lift a finger to defend their lives and property. It is time to deconstruct the boot licker, for their good as well as ours. There are two main reasons for the boot licker phenomenon: an inferiority complex and complacency.

First, one should start by observing the outward physical characteristics of those who most ardently chant “Back the Blue” and carry the thin blue line flag. Some are in decent shape and some are perhaps related to law enforcement. However, most are out-of-shape Boomers. This reveals a severe inferiority complex. Most of these people know consciously and/or subconsciously that they could never have the pride of wearing a uniform, be it military or law enforcement. They are weak, fat, and uninured to hardship. Ignoring what Professor Shekelstein over at the sociology department says, most healthy boys idolize cops, pilots, soldiers, EMTs, and the like. However, that admiration in a healthy society is supposed to translate into actually becoming one of those things, or at least maintaining a healthy virility, even if only as an accountant. When it comes to manhood, the Boomer generation is all bluster and no substance. These same people who quote John Wayne and wear edgy patriot shirts also allow their waifus to boss them around and fawn over blacks to prove to their enemies how not racist they are. We don’t need drone footage on DLive from Woodstock to know full well how they behaved during the hippy era. At least millennials admit that they’re decadent little pussies.

Boomers exist in a perpetual state of infantilism and hero-worship because they themselves cannot be the heroes that their country needs, and deep down they know this. Thus, they can not constructively criticize the police any more than a soyboy could criticize their favorite Marvel hero, even in the face of prolonged oathbreaking and lopsided favoritism towards the rioting Left.

Second, the Boomers have lived through an unnatural and frankly undeserved era of prosperity and security which has naturally led to a senile complacency that makes the twilight of fourth-century Rome look energetic in comparison. It doesn’t help that an excess of TV exacerbated their loss of critical thinking skills. Thus, when objective reality changes, even when it is in front of their eyes, it is difficult for them to comprehend that the world would ever be anything other than what it always was. They are lost in a halcyon dream of a high-trust, Leave it to Beaver society where we can all get along and good always triumphs, even as Shaniqua is twerking her booty atop the ashes of our cities.

Such complacency is what drives the QAnon cult, which then further compounds that complacency upon itself. There is a sizeable segment of the patriot community that thinks that all they need to do to save America is to vote Republican, pray, and hold Trump’s beer as he dashes off like a superhero to destroy the secret bases of Satanic pedophiles who have ruled the world for centuries. I am not making this up. I was actually briefed on this by a Q fan at a Trump rally. They were very nice and have the best of intentions, but nonetheless end up being tricked into inaction through Q. These complicated narratives are time and energy-consuming, and encourage people to treat politics not only as a spectator sport, but one in which the outcome is already predetermined. Therefore, even if America is besieged for half a year by domestic terrorists, the only response they can muster is to sit by and trust that Trump will take care of them. Not only is there no need to criticize the oathbreaking of the police, but it may even be counter-productive because it is not part of the vaunted plan. A further tangent into the Q rabbit hole is outside of the scope of this article so I will not opine much further on it or who the source of their cryptic prophecies might be. However, real patriots do not trust plans announced from ambiguous sources. They trust in the realities of blood and iron.

There are certainly some of this type who are fired up and not complacent. However, complacency in these cases is usually replaced by cluelessness and recklessness. The people who shout the loudest at these spontaneous Stop the Steal rallies sometimes have the cringiest, clueless takes — that the enemy is socialism, and that diversity is the GOP’s greatest strength instead of the white base. On the other hand, many of them are downright reckless in their Fedposting because they haven’t gotten the memo about lawfare. While usually well-intentioned, this is also counter-productive.

Therefore, we have identified the principal forces driving the boot licker problem, which are an inferiority complex coupled with complacency. The question, then, is how to remedy it. The answer to that is to have more Groypers show up to these rallies taking place nationwide.

Groypers do not share in this inferiority complex because we are fit, confident, and well-educated. Furthermore, even if the masses do not know that we are Groypers or even what a Groyper is, those with an inferiority complex will naturally follow us due to that complex, while those without the complex will still generally follow us due to their enthusiasm for new blood in the GOP. A small clump of young people at a rally will invariably attract tons of attention. Being young and conservative is almost tantamount to celebrity status. Our people are looking for leaders, so it is time to step into that role.

Having captured the attention of the people, we can then direct it to something productive. A few good-looking young guys shouting “America First” or any other slogan that is real Nationalism instead of fake GOP Nationalism will invariably be able to inspire almost everyone else to follow suit.

In specific relation to shutting down boot licking, the best thing we can do is to meet chants of “Back the Blue” with “Pick a Side” or perhaps preempt them entirely at the first sign of the police treating actual peaceful protestors as criminals when a few weeks earlier they had allowed terrorists to rule the streets without consequences. This chant cuts to the heart of the matter of widespread police oathbreaking but without directly attacking them, which is still difficult for many people to do. It is a simple, catchy, and short slogan. It also speaks to the growing polarization of the country. Anyone who hears it, be they police, protestor, or bystander, will know that the days of lukewarm equivocation are ending.

As for the police? They will know that we have caught on to their double standards, that our support is not unconditional, and that our patience has its limits.