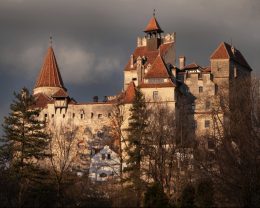 I have always wanted to visit Transylvania and Bran Castle, known throughout the world as Dracula’s Castle. Although having little connection to Vlad the Impaler or Bram Stoker’s Dracula, the myths behind the castle have inspired countless horror films and heavy metal songs. When my mom visited me in Eastern Europe, I decided to take her to Brașov, Romania for a tour of Bran Castle. While the castle seemed like a tourist trap, I was reminded of all the settlers, warlords, and poets that journeyed there before me. Their works and struggles reminded me that our journeys in life are just as important as the destinations we are trying to reach.

Transylvania is located along the Carpathian mountain range in Romania. The territory has been controlled by different groups, kingdoms, and empires throughout history. After being ruled by the Bulgarians during the 9th and 10th centuries, Transylvania became a voivodeship in the Kingdom of Hungary in 1003. The name “Transylvania” comes from a Latin document written in 1075 that referred to the area as ultra silvam, beyond the forest. The territory also has various names related to the different groups that settled in the area. In Romanian, the region is known as both Ardeal and Transylvania. The Hungarian name for the area is Erdély and the German name is Siebenbürgen, which refers to the several cities and castles built by the Transylvanian Saxons.

The Transylvanian Saxons were Germans who began settling in Transylvania in the 12th century. These settlers were invited by the Hungarian kings to create farms, build mines, and develop towns throughout Transylvania. King Andrew II of Hungary was one of these kings and he also invited the Teutonic Knights to the area. In 1211, the knights created a settlement near the village of Brașov called Kronstadt. In 1212, The Teutonic Knights built a wooden castle along the mountain pass towards Brașov and Kronstadt (both of which would merge into one large city). Unfortunately, the castle was destroyed by the Mongols in 1242.

In 1377, King Louis I of Hungary allowed the Transylvanian Saxons of Kronstadt to build a new fortification over the old castle. The settlement of Bran started to develop during the construction of the new castle. Thus, the castle took the name “Bran Castle.” Bran Castle was used in defense against the Ottoman Empire throughout the 15th century and often protected the Transylvanian Saxons during the Ottoman invasions. As a border defense post, various Hungarian kings and generals visited the castle. Ironically, the one ruler who may have never visited Bran Castle was Vlad III Dracula.

Vlad III Dracula was born around 1428 and was the second son of Vlad II Dracul. After spending his teenage years as a hostage of the Ottoman Empire, his father and older brother were murdered. By navigating politics and power grabs between Hungary and the Ottoman Empire, Vlad became the Voivode of Wallachia three different times between 1448 and 1476. Yet throughout his life, Vlad was under constant threats and attacks from both Ottoman and Hungarian forces.

Between 1456 and 1460, Vlad came into various conflicts with the Transylvanian Saxons in Brașov, as the wealthy aristocrats and merchants there often supported Vlad’s Hungarian and Wallachian rivals. During this period, Vlad plundered the villages around Brașov and executed the supporters of his rivals. The earliest stories about Vlad recount how Vlad and his forces captured men, women, and children from their homes and brought them to Wallachia to be impaled.

On June 17th, 1462, Vlad led a successful night attack against Mehmed II and his Ottoman forces near Târgoviște. As Mehmed and his Ottoman troops attempted to follow Vlad, they discovered the “forest of the impaled,” where thousands of prisoners, captives, and locals were impaled on stakes. This caused Mehmed and his troops to leave the area in retreat. It is due to these stories and accounts that Vlad earned the nickname “Vlad Tepeș” (Vlad the Impaler).

There have been many attempts to connect Vlad to Bran Castle. In 1462, Vlad was captured by the Hungarians and was rumored to be imprisoned in a castle on a mountain top. It was originally thought that Vlad was imprisoned in Bran Castle, but most historians now believe that Vlad was imprisoned in a fortress north of Pest. While Vlad and his troops raided the area around Brașov and Bran Castle, this area in Transylvania was never under his rule and often supported his rivals. Although he may have traveled past Bran Castle many times, he most likely never owned, controlled, or visited the castle.

While Vlad was considered a cruel tyrant over the next few centuries, many Romanian artists of the 19th century portrayed Vlad as a powerful and just ruler who punished criminals and traitors. Ion Budai-Deleanu was a Romanian poet who wrote the first epic poem about Vlad. In Țiganiada, Budai-Deleanu portrays Vlad as a hero who fights the Ottomans and the Strigoi (monsters in Romanian folklore that resemble vampires). Even Mihai Eminescu, one of Romania’s greatest poets, was inspired by Vlad. The Third Letter by Eminescu is a historic ballad dedicated to Vlad and proclaims that Vlad will one day rise from the grave to defeat all the enemies of the Romanian nation.

These poems, combined with the older myths and rumors, made Vlad one of the most well-known medieval rulers throughout Europe. The area of Transylvania also started to become popular. Emily Gerard was a Scottish writer who spent time in Brașov and was fascinated by Transylvania and its folklore about monsters. She wrote Transylvanian Superstitions in 1885 and The Land Beyond the Forest in 1888. Both articles heavily influenced Bram Stoker in writing Dracula, which was published in 1897. While Stoker may have gotten the “Dracula” name from Vlad’s father, Vlad was not the main inspiration behind the vampiric character. Such details would be forgotten after an ad campaign by the Communist Party of Romania.

The Communist Party of Romania was trying to improve relations with the West in the 1970s and decided to focus on tourism. Due to the location and architecture of Bran Castle, the Romanian government decided to advertise it as the “real” Dracula’s Castle. The goal was to draw in tourists to visit the castle and to expand the economy of the surrounding cities. The castle was turned into a museum and the area around the castle was turned into a medieval village with souvenir shops. Along with countless films over the last several decades, this ad campaign was influential in linking Vlad the Impaler to Bran Castle and Transylvania.

As a young kid, one of the first video games my mom got me for Christmas was Castlevania II: Simon’s Quest. The music, setting, and role-playing elements of the game got me interested in the mythology behind Dracula and Transylvania. My mom would also take me to the local Blockbuster rental store where we would pick out classic vampire films such as Salem’s Lot, Fright Night, and The Lost Boys. When I discovered heavy metal as a kid, many of my favorite bands also had songs about vampires, Dracula, and Transylvania. Such songs include Transylvania by Iron Maiden, Return of the Vampire by Mercyful Fate, and Transylvanian Hunger by Darkthrone. Since my mom supported my interests in video games, horror movies, and heavy metal, the least I could do was to take her to Transylvania to see Bran Castle.

After checking into our hotel near the city center of Brașov, we took a bus to the parking area of Bran Castle. Despite arriving an hour before the opening time, the area was already crowded with tourists. The souvenir shops seemed like a year-round Christmas market but with merchandise of Vlad the Impaler and Dracula instead of Santa Claus. After waiting in line for an hour, we took a detailed tour of each room and floor of the castle, including the trap door to the basement. Once the tour was finished, we took a walk to find a local restaurant that served traditional Romanian food.

Just a few blocks away from the castle we found a restaurant that was completely empty. We each had a shot of Pălincă and were given a free sample of Țuică, which is a Romanian spirit distilled from plums. For our main meal, my mom had ciorba de perisoare (meatball soup) and I ordered a sampler plate that included polenta, mititei (grilled sausages), and sarmale (cabbage rolls). For dessert, I had alivenci (cheesecake). During our meal, we talked about the castle being a trap with too many tourists around to fully enjoy the history, atmosphere, and scenery. We laughed about it but also enjoyed the opportunity to have lunch together near Bran Castle. Most importantly, we both agreed that it was an amazing journey to Transylvania and well worth the effort to get there.

Looking back on my trip to Transylvania, I realize that our journeys in life are sometimes more important than the destinations we are trying to reach. The Transylvanian Saxons went on a journey to start a better life in Transylvania. While most of their descendants have relocated back to Germany, their impact is still seen today in the architecture and culture of Transylvania. Vlad III went on a lifelong journey to become the Voivode of Wallachia. He met a dreadful end but became a legend to future generations. Poets like Budai-Deleanu and Eminescu wrote various works in Romanian so that their people could have their own language, culture, and sovereignty. Although they did not live to see it, their works inspired various movements that eventually led to an independent Romania.

When we talk about our red-pill journey, we tend to think that we have already reached our destination. Yet for us in the Dissident Right, our journey continues. Some of us will travel together on similar paths while others will travel alone on paths unknown. Some of us will find success in our lifetime while others will become the heroes of tomorrow. Although our journeys will be different, we all have the same destination and goal to secure the existence of our people and a future for white children.

Until we reach that goal and destination, be sure to enjoy the journey as much as possible. Take the time to enjoy the scenery and atmosphere with the important people in your life. When things do not go as planned, try to find the silver lining with each situation. After a life spent playing video games, watching horror films, and listening to heavy metal, I finally got to visit Transylvania and Bran Castle. Although it may have been an overcrowded tourist trap, I got to have Romanian food and spirits with my mom in an empty restaurant.

As a wanderer and a dissident, it will always be my favorite memory of Transylvania.

« A Low Point for Democracy?