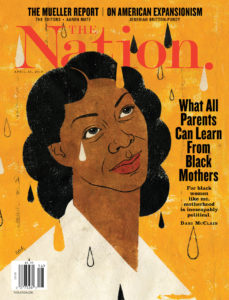 The Nation is the flagship magazine of the American Left. It is also the oldest continuously published weekly magazine in the United States.

The Nation was founded on July 6, 1865, on the ashes of the Confederacy. The Nation was the successor to abolitionist William Lloyd Garrison’s The Liberator, which was closed after the ratification of the Thirteenth Amendment to the US Constitution.

Once slavery had been abolished and the Confederacy defeated, The Nation undertook the broader project of reconstructing America on the foundations of the Egalitarian Civil Religion set forth in Lincoln’s “Gettysburg Address.”

For 155 years, The Nation has been true to its mission, always pushing politics and culture further to the Left. And the American nation has followed its lead; whether Americans followed enthusiastically or grudgingly, they followed.

What has this to do with Counter-Currents?

The mainstream Right in America wins many battles but continues to lose the overall war with the Left because it has never fundamentally understood the importance of ideas. Yes, conservatives like to quote the title of Richard Weaver’s Ideas Have Consequences. But they don’t have the faintest idea what the book actually says. (At Counter-Currents, we actually read Weaver.)

Moreover, what passes for the ideas of mainstream conservatives — normative anti-racism and pious rot about “all men are created equal” — are indistinguishable from the ideas of the Left, so they are bound to have the same consequences anyway. Conservatives just want to enact radical egalitarianism slowly and legally.

In 1897, Robert Lewis Dabney summed up the uselessness of American conservatism in words that remain true today:

This is a party which never conserves anything. Its history has been that it demurs to each aggression of the progressive party, and aims to save its credit by a respectable amount of growling, but always acquiesces at last in the innovation. What was the resisted novelty of yesterday is today one of the accepted principles of conservatism; it is now conservative only in affecting to resist the next innovation, which will tomorrow be forced upon its timidity and will be succeeded by some third revolution; to be denounced and then adopted in its turn. American conservatism is merely the shadow that follows Radicalism as it moves forward towards perdition. It remains behind it, but never retards it, and always advances near its leader. . . . Its impotency is not hard, indeed, to explain. It is worthless because it is the conservatism of expediency only, and not of sturdy principle.

If the Right is ever to roll back the Left, if we are ever to halt then reverse America’s accelerating march to perdition, we need to uphold the correct “sturdy principles,” namely the rejection of racial egalitarianism and all of its noxious consequences, including the lie of conservative civic nationalism. Moreover, we need to communicate these true principles far and wide, as persuasively as possible, using every available medium. Finally, we need to persist until our ideas reach the tipping point and can change the course of history.

How long will it take? Nobody knows. But if it takes 155 years, we want Counter-Currents to still be there, still reeling America back from the abyss.

What does it take? Money and commitment. We’ll supply the commitment. We need you to supply the money–which of course implies commitment as well. In its 155 years of Left-wing vanguardism, The Nation made a profit only one year. But The Nation persists because people on the Left appreciate the power of ideas. Thus year after year, they donate to keep it fighting.

Counter-Currents is trying to raise $150,000 this year, a tiny fraction of what publications like The Nation raise. Thus far, we have received 564 donations totaling $74,767, for which we are enormously grateful. Thus we are almost halfway there! We will keep the fundraiser going as long as needed but the ultimate deadline is the end of the year, less than four months away.

This year, we are facing an even tougher battle, because Counter-Currents has been politically blacklisted from the entire credit card industry. We take this as a compliment. The Nation and other publications of the Left have never faced this kind of censorship from the plutocracy, and that speaks volumes. But fighting white genocide is going to require a lot more than inconvenience. So please, look into the other ways you can help, which I have listed below.

Counter-Currents used to derive about half of our income from book sales. But in 2019, Counter-Currents was de-platformed from 80% of the global book market by Amazon.com and Barnes and Noble. We take this as a compliment too.

In the Fall of 2018, my book The White Nationalist Manifesto was vying with Francis Fukuyama’s Identity — a lame critique of white identity politics — for the top slot in Amazon’s political philosophy and nationalism categories. This frightened the Left, because in a fair debate, they know they can’t win. (My critique of Fukuyama’s book is here, here, and here. Fukuyama still has not responded to The White Nationalist Manifesto.)

Thus, in February of 2019, Amazon unrolled a new campaign of censorship against White Nationalist ideas. The first two books they banned were The White Nationalist Manifesto and Jared Taylor’s White Identity. Eventually, all Counter-Currents books were banned, and in a truly Orwellian turn, Amazon did more than stop selling our books; they also deleted many of their product pages, including customer reviews, so it was as if the books had never been published.

Counter-Currents is thus getting out of the book business. We will complete our Yockey edition and other obligations to authors, then we will focus entirely on our webzine which has the greatest reach and impact. I will continue to publish my own books at Counter-Currents, since no other publisher would have them, but increasingly they will function simply as thank you gifts for our donors.

But it is not all a tale of woe. Despite unprecedented censorship and de-platforming, Counter-Currents has been steadily growing.

In August, we had more than 320,000 unique visitors. America is burning and bleeding because of the consequences of bad ideas. And people are searching for alternatives, which leads them to Counter-Currents. The best way to fight bad ideas is to promote better ideas, and Counter-Currents is the flagship journal of the anti-egalitarian, identitarian Right.

If you have not yet donated to Counter-Currents, there’s never been a better time.

If you have been planning to donate, now would be a good time to do it. We are less than $250 from the half-way point. The next ten people who donate $250 or more can choose signed copies of any two of my books. Just message us at [email protected].

One last thing. Before de-platforming, Counter-Currents had a populist strategy of supporting ourselves with book purchases and small donations from many different individuals. Our enemies correctly calculated that kicking us off PayPal and blacklisting us from credit card processors would eliminate a lot of our less committed supporters, simply by making it inconvenient to donate or buy our products. They were correct.

We are still a populist journal, but we have had to adopt a more elitist strategy. To survive, we need to cultivate larger donations from a smaller number of highly committed and relatively wealthy supporters. If that describes you, please reach out to me at [email protected].

One way such individuals can help is by sponsoring matching grants. Almost one-third of what we have raised this year comes from a single matching grant os 20,000 euros.