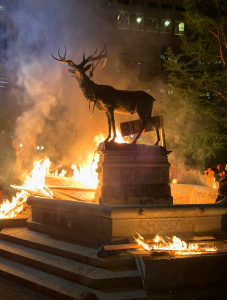 “Trump wants to instigate a race war,” claims Illinois Rep. Bobby Rush. “He wants to have Black folks fighting white folks so he can rise up and say, ‘I’m the real Grand Wizard of the Ku Klux Klan and I’m the president. Reelect me.’ That’s what he’s trying to do. He’s trying to play to the fears, to the racial animus that exists among certain white people, and he will do everything and anything to do that because he wants to be reelected at all costs.”

Former Trump Homeland Security Elizabeth Neumann argues Trump is giving his supporters a free pass to “start a race war.” “They’re very clear about their ideology and what they’re trying to do and we won’t say it. We won’t call it like it is and that’s a problem,” she says of these alleged race soldiers.

Of course, these claims are silly. The Left is responsible for the violence, not clandestine white supremacists. The Right-wing backlash is a response to the Left’s violence, not the cause of it. The allusions to race war conjure ghastly apparitions of modern-day Klansmen riding through urban areas and lynching innocent black people. In reality, the clashes between Right and Left have largely been between white people. The three men Kyle Rittenhouse shot count as white on the census. The Antifa militant who executed the Trump supporter in Portland was white. Most of the rioters in Portland, Kenosha, and several other cities are white. Seattle’s autonomous zone was mostly manned by white people. Studies show many Black Lives Matter demonstrations were mostly white. The “race war” looks to be an internal affair among whites.

Liberals insist the demonstrators are black to sanctify their cause. Blacks are America’s gods; their concerns must always be respected and their misbehavior tolerated. To attack them makes you a racist and worthy of the worst punishment. If the demonstrators are white, it becomes harder to claim their critics are racist and dampens the cause. It’s difficult to justify whites looting and burning when they’re not suffering blacks’ alleged burdens.

While it is true that much of the worst rioting has been caused by majority-white crowds, that doesn’t mean blacks have sat at home through all this. They’re just not the ones challenging police and setting fire to federal buildings. Blacks are overrepresented among the looters. Many videos exist of all-black mobs ripping through shoe stores, malls, and supermarkets for goodies. There are also cases where statues were pulled down by predominantly black demonstrators, such as in Portsmouth, Virginia. Blacks are also largely supportive of the rioters’ anti-police rhetoric and demands for more benefits for blacks. Pro sports leagues have turned themselves into Black Lives Matter propaganda centers to placate black athletes, a sure sign this madness isn’t limited to whites. Individual blacks just seem more concerned with stealing shit than fighting with cops.

This hardly supports the conservative view that blacks aren’t down with wokeness and that this is all just a white issue. Blacks no longer have the agency and leaders to sustain serious radical actions. In the 60s, there were plenty of charismatic black leaders who could guide and organize urban insurrections. The riots then were overwhelmingly black, even though commentators hilariously tried to claim whites were involved. The Black Panthers and the Nation of Islam were serious forces within the black community. J. Edgar Hoover considered black extremism the number one threat to the country. Black leaders could be trotted out and issue demands to appease the rioters. The Fair Housing Act was passed in 1968 in an effort to quell the riots.

None of this exists today. Black radicals today are mostly clowns who LARP as extremists. Consider the armed black militant march in Kentucky a few weeks ago. They promised to overthrow the state government if their demands were not met. The deadline came and went and nothing happened. The system allows blacks to march around in full paramilitary gear without a fuss. The authorities know they’re not a real threat. The few black radical leaders are total jokes. There’s white man Shaun King, co-opted grifters, insane black women who black men don’t respect, and dimwitted preachers who make Martin Luther King look like Sir Isaac Newton. This is not a population primed for revolution.