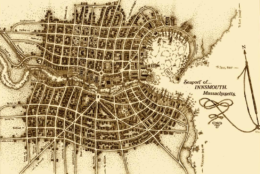 August 20 marks the birthday of H. P. Lovecraft. Although he was obscure during his lifetime, he emerged to become one of the most influential figures in the horror genre — the most notable between Edgar Allan Poe and Stephen King. Each successor built on his predecessor. This added to the American tradition in the genre, though in Lovecraft’s case, he remained stylistically close to the roots of his British forebears.

Writing stories about Cthulhu and other such cheerful matters wasn’t what he had in mind initially. As I wrote in Deplorable Diatribes:

H.P. Lovecraft wanted to be the next Keats, but he had to settle for writing tales of Eldritch horror. Actually, he did a fine job of it and eventually became quite influential, though unfortunately he didn’t Get Discovered until after his death. Now, because of his politically incorrect views — which were hardly unusual during his times — the usual suspects want to drop this great writer in the memory hole. (Did I mention that today’s literary establishment is a Leftist circle-jerk?) Thwarted creative ambitions are also how you can start life wanting to be an artist, and then end up as a dictator with really lousy press.

One frequent theme in his stories is the idea that mankind is in a state of unawareness, at least for the moment. Outside of this bubble of blissful ignorance, which a scientific discovery might pierce, are ugly truths that would be mind-blowing if they were understood. This viewpoint resurfaced in 1950s science fiction with the “secrets mankind was not meant to know” trope. On the other side of that dialectic, of course, is the bubbly and optimistic literary current of the time, which I’ve enjoyed parodying. Since then, science fiction has dialed down on the saccharine. The film Event Horizon, made back in the days when most movies were still watchable, is a good exploration of this particular Lovecraftian theme.

Truth is stranger than fiction, but not always!

In some ways, Lovecraft was more than just an author of scary stories. Some of it is nearly prophetic. For example, “The Colour out of Space” is a story about a meteorite of an unknown substance with an unearthly glow never before seen. It poisons the farm where it lands, first producing crops that flourish unusually but are inedible. The livestock becomes sick and dies off, as well as the farmers.

All these details are hauntingly close to a description of what radioactive contamination would do: it emits radiant energy not in the visual spectrum, induces mutations, pollutes the land, and causes wasting diseases. In 1927, when the story was written, such dangers were not well understood. For example, energy shots with radium still were for sale.

“Facts Concerning the Late Arthur Jermyn and His Family” is another oddly prescient story. This one, written in 1920, concerns a British gentleman who uncovers a shocking secret about one of his ancestors. (Much like in Oedipus Rex, it turns out that the truth hurts.) No, Arthur Jermyn doesn’t discover that he’s German. Instead, let’s just say that there’s some monkey business involved.

Lovecraft’s goal was to outdo the “tame backstairs gossip” in the popular book Winesburg, Ohio by writing about a truly dreadful skeleton in the closet. However, modern politically correct literary criticism gets pretty squirmy about the story, interpreting it as an allegory about race-mixing. Actually, it’s the critics who are getting white gorillas mixed up with black people. (Is that projection on their part?) If that’s what Lovecraft had in mind, he didn’t have to be allegorical at all; he could’ve written about an Englishman horrified at discovering the proverbial “African in the woodpile” of his family tree.

All that aside, what is surprisingly prophetic about the story is when Soviet biologist Ilya Ivanovich Ivanov started trying to breed humans with apes only a few years later. How’s that for an attempt at defictionalization? Species is only a social construct, comrades!

The town with a fishy past

Another Lovecraft story that irks modern politically correct critics is The Shadow over Innsmouth, which they believe is another allegory about race-mixing. Again, if that’s what Lovecraft had in mind, he didn’t have to be allegorical at all. He could’ve written about a New England town that becomes corrupt because they interbred with a local Indian tribe and started worshiping the Wendigo or something. It’s true that Lovecraft disapproved of race-mixing, but he hardly needed to convince anyone; at the time, 99% of the public (according to one survey, at least) felt the same way.

Even so, the narrator does indeed wonder if some exotic foreign ancestry might account for the strange “Innsmouth look” characteristic of its residents. It turns out that this hardly scratches the surface of things! The first one he sees, a bus driver, is a typical specimen:

His age was perhaps thirty-five, but the odd, deep creases in the sides of his neck made him seem older when one did not study his dull, expressionless face. He had a narrow head, bulging, watery blue eyes that seemed never to wink, a flat nose, a receding forehead and chin, and singularly undeveloped ears. His long, thick lip and coarse-pored, greyish cheeks seemed almost beardless except for some sparse yellow hairs that straggled and curled in irregular patches; and in places the surface seemed queerly irregular, as if peeling from some cutaneous disease. His hands were large and heavily veined, and had a very unusual greyish-blue tinge. The fingers were strikingly short in proportion to the rest of the structure, and seemed to have a tendency to curl closely into the huge palm. As he walked toward the bus I observed his peculiarly shambling gait and saw that his feet were inordinately immense.

Now here’s an interesting thought. Might The Shadow over Innsmouth be yet another prophetic Lovecraft work? Well, let’s examine the evidence. 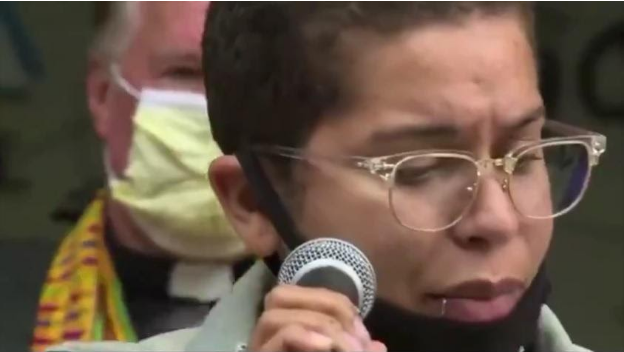 Meet Lilith Sinclair, an activist from Portland. (Some accounts describe her as a “sex worker.” If that’s really true — not that I’m inclined to believe it — then she’s one of the unlikeliest practitioners of the oldest profession since Andrea Dworkin.) Her goal is “organizing for the abolition of not just the militarized police state but also the United States as we know it.” Whatever you say, kid. That sort of thing is what our Jewish friends call chutzpah.

Opening her brief speech in which she placed herself in the public spotlight, she described herself as an “Afro-Indigenous non-binary local organizer.” That sounds like a personal problem, of course. Still, she doesn’t exactly appear very African or American Indian. Instead, it does seem that there could be an even more exotic influence in her physiognomy. Could this be the “Innsmouth look,” perhaps?

The mask isn’t over her mouth in this shot, so it’s not doing much good for the usual purpose of security theater about the Wuhanic Plague. Could it be hiding a set of gills? Moreover, is that a lip ring, or did she catch a fishhook last time she was visiting the ocean? I don’t know if there’s an underwater city of the Deep Ones similar to Y’ha-nthlei​ not too far from Portland, but if it’s there, perhaps the Navy might’ve heard a thing or two about that. 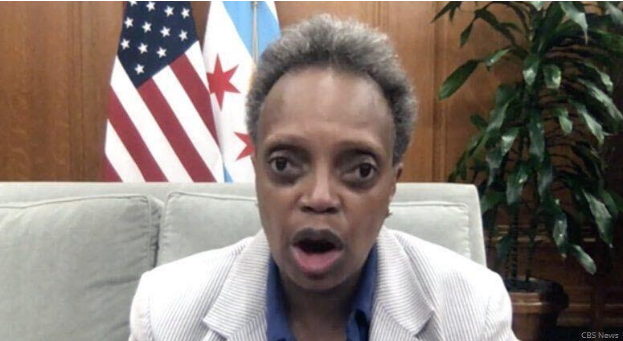 Our next contestant is Lori Lightfoot, the first black lesbian mayor of Chicago. That’s three intersectionality points right there — rock on, Lori! — Still, could she get four points if it turns out that she’s part amphibian? I haven’t seen her DNA results, but that physiognomy makes me wonder. The Wiki page currently says:

Lightfoot resides in the Logan Square neighborhood, on Chicago’s North Side. She is married to Amy Eshleman, a former Chicago Public Library employee, who is now a full-time parent to the couple’s adopted daughter, Vivian.

Whether or not Lori is related to the Deep Ones, maybe she might have some ideas about what to do with Lake Michigan’s zebra mussel problem. With Dagon’s help, she can have that licked in a hurry! 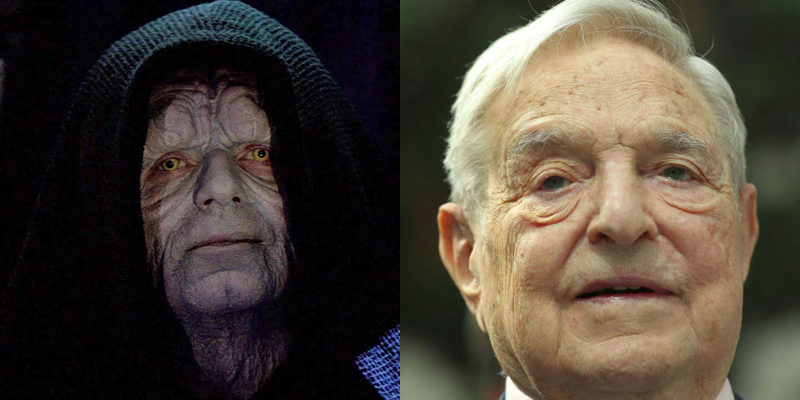 Our final contestant is George Soros, someone who hardly needs introduction here. Still, I’ll do it anyway. Georgie is tougher than Paul Bunyan, cooler than Fonzie, more magnanimous than Santa Claus, hotter than Jessica Rabbit, and sharper than a tack. Above all, he is the most wonderful person to have walked the planet since John Lennon. However, it could be that I’ll need to be a bit loose in my definition of “person” here — what if he’s part Deep One?

Although widely believed to be a pure, 100% Hungarian Magyar, just like his homies György Lukács and Béla Kun, maybe that’s not the case. According to anonymous sources in the Pentagon, perhaps Soros didn’t begin his life as a paprika-munching salt-of-the-earth Bohunk. Instead, as legend has it, Aquaman met a sexy sea monster at a wild party, and the rest is history.

There are lots of stories about what young Georgie did during his early years. Maybe he learned his legendary ambition from growing up in a low-income housing project in R’lyeh, a vibrant, historically amphibian community located beneath the South Pacific. Since he has a very fishy physiognomy, all that might well fit the profile. Uh oh, did I say “profile”? Sorry!

OK, none of that was true; instead, this fish story was lighthearted satire, all in good fun. Fishmen aren’t real.

But still, since everybody knows that reality is a social construct, who can be certain of anything?