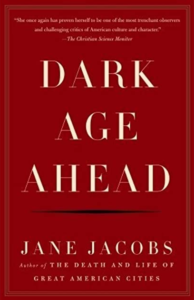 Jane Jacobs (1916-2006) is best known as the author of The Death and Life of Great American Cities (1961) and as the chief adversary of the soul-destroying activities of Robert Moses, the architect of New York City’s infamous “urban renewal” projects of the mid-twentieth century. Jacobs’ books and articles (and political activism) on architecture and city planning provided much of the intellectual underpinnings to the shift in city planning from urban renewal, slum clearance, and low-density suburbanization to gentrification and mixed-use high-density reurbanizaton.

Dark Age Ahead (2004) was her final book, and in it she posits that American (and Canadian) civilization is engaged in a death spiral not unlike that earlier seen in the Roman Empire. According to Jacobs, the reasons for this decline are the results of five causes:

Although the book was written just a little over 15 years ago, it might as well have been written in the 1950s. All of Jacobs’ five causes for American societal decline are spot on, but she fails to follow her thinking to its logical conclusion. Looming behind all of these indicators of American decline is the corrupting influence of the Negro. Gentrification could work to revitalize cities, but the presence of feral Negroes in urban settings makes this a daunting proposition. Even if a gentrification project is successful, it most likely abuts a Negro district that brings with it all of the pathologies associated with negritude. And with the abandonment by Leftist mayors of the centers of American cities to lawless hordes of Negroes and their Antifa handlers, it is unlikely that mixed-use high-density gentrification will continue to be a force in urban development. Indeed, the twin blows of COVID-19 and BLM have made suburbanization and low-density development more attractive than ever.

Likewise, mass transportation can work in an all-white or all-Asian city, but it becomes dysfunctional and dangerous with the presence of Negroes. Compare the public transportation system of Tokyo with San Francisco/Oakland’s BART system or the MARTA system of Atlanta and it becomes quickly apparent why Americans are wedded to their automobiles. The personal automobile is the greatest Negro avoidance system ever developed by man.

The decline of American higher education has many causes: corrupt administrators, the radicalization of the professoriat that began with Vietnam War draft dodgers gaining control of universities in the 1960s, and declining academic standards resulting from the need to keep enrollment numbers up in a rapidly contracting pool of candidates, a decline in standards that has been exacerbated by affirmative action policies for low IQ Negroes. The decline in educational standards is not entirely the fault of the universities, and this is a point that is not mentioned by Jacobs. How can American higher education succeed when the students matriculating into its institutions are so woefully unprepared and/or oftentimes have such limited cognitive abilities that higher learning is simply beyond their intellectual level? Jacobs’ lament for the loss of the life of the mind as a raison d’être for attending university seems almost quaint today, like something out of a novel by Evelyn Waugh or Anthony Powell.

When Jacobs remarks about the present-day abandonment of science as a cause of societal decline, she deals mostly with examples taken from traffic engineering, a profession that she claims is based upon ideological dogma rather than scientifically based research and statistical analysis. For instance, Jacobs may be entirely correct when she says that the bias of traffic engineers against multi-modal boulevards may have no basis in scientific fact. She overlooks — or more likely, cannot bring herself to admit — that the bias against pedestrians and public transportation in favor of limited access highways is so that people in the safety of their private automobiles can travel through an urban environment while avoiding the predations of the Negro and the filth and illicit drug-taking of the homeless and the insane.

While there is much to admire in Jane Jacobs’ writing about urban planning, it is utopian in nature and consistently misses the point. No well-thought-out urban planning can change the character of the Negro. Placing Negroes in suburban schools has not made Negroes more intelligent. Allowing Negroes to stroll down the boulevards of London or Paris has not turned Negroes into English gentlemen or French intellectuals. While the curse of diversity has probably doomed America to a fate similar to that of Rome, Jacobs demonstrates — but takes care not to speak explicitly — that the success of Japan is due to its lack of diversity. After Commodore Perry’s 1853 forced opening of Japan to the West:

It [Japan] continued protecting itself even while it was catching up to the West and in the process transforming itself from an agrarian culture to an ingenuity-based, postagrarian society. Throughout the transformation, the society took immense care to cherish and nurture its own familiar cultural characteristics. (p. 171)

» A Case for Optimism