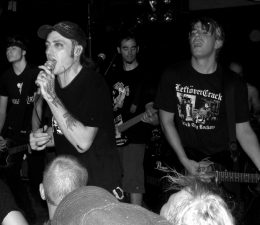 “You cannot edit strength and beauty out of life.” — Bronze Age Pervert

Punk music is often connected with left-wing anarchism. In connection with this philosophy, it ostensibly rejects traditional aesthetics and order, but in reality, practically everyone still prefers harmony over chaos, and this is reflected in the music. At the same time, it often purports to be nihilistic or pessimistic while having an uplifting effect on the listener. These contradictions are particularly apparent in a subgenre known as “crack rock steady.”

Singer, guitarist, and songwriter Scott Sturgeon, more commonly known as Stza, is known for his work in punk bands Choking Victim, Leftöver Crack, and Star Fucking Hipsters. The term “crack rock steady,” used to describe these and similar bands, is taken from the name Leftöver Crack and the term “rocksteady,” a style of Jamaican popular music developed in the 1960s, which was similar to ska and influential on reggae. The music itself is a fusion of ska, punk, and heavy metal, with occasional interludes of classical and even elements of folk music. 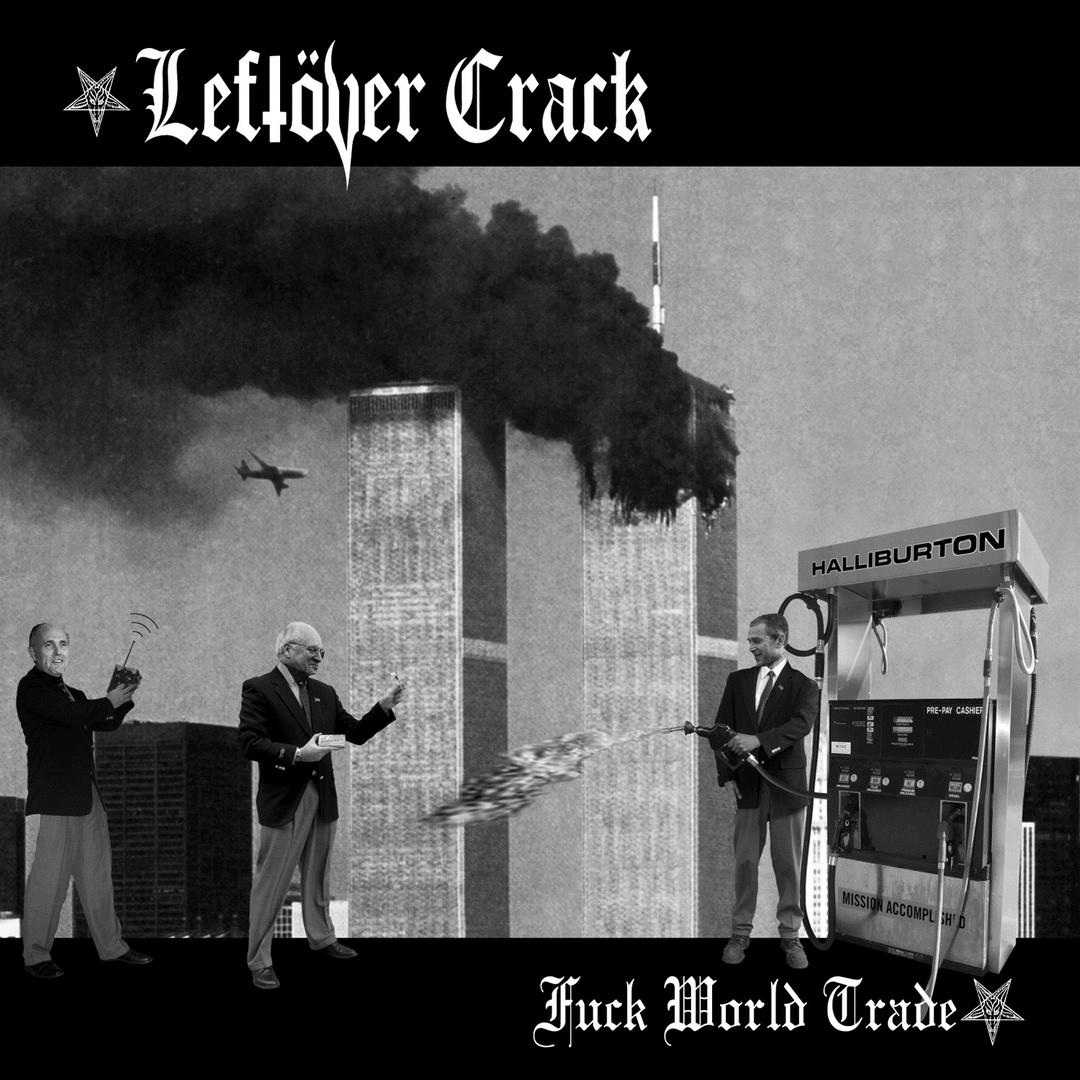 The cover of Fuck World Trade.

Sturgeon’s lyrics cover familiar topics such as contempt for consumerism, the criminal justice system, and religion, but they stand out in being particularly well-written. One of his best songs, from the Leftöver Crack album Fuck World Trade, is entitled “Clear Channel (Fuck Off),” referring to the mass media corporation of the same name. 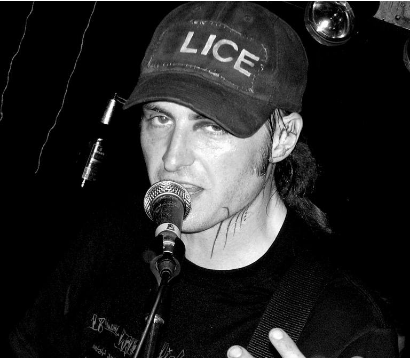 Stza performing with Leftöver Crack in Cologne in 2006.

The lyrics are delivered in Stza’s typical abrasive style, which expresses bitterness, outrage, and contempt. This is in line with a sort of anti-beauty aesthetic which unfortunately developed in the 20th century. But this is contrasted with the poetic rhythm and clarity of the text:

Fabricate one single voice, broadcast from sea to sea
What once held notions of change and choice is now being controlled fully
Deregulation’s raised the edge of exploitation’s bar
Politics replaced by bling and clothes and fancy cars
Trapped imaginations by the video’s blinding light
Bombarded with monotony that captivates the sight
The channel we’ve been tuned to is all frigid, blank and clear
Told what to eat and drink and buy and who to hate and fear
Poisoned by a fairy tale, a capitalistic dream
Go to sleep, you’re free and brave and on the winning team

The music similarly deviates from mere ugliness or noise, although it contains both. The guitar parts sound as if they are intended to be uplifting and give a sense of great power; there is a beautiful harmony struggling against the ugly elements as if to convey the same type of struggle in life. This is partly a reflection of his own mental state: Stza admits to having bipolar disorder, which involves contrasting periods of exhilaration and depression. 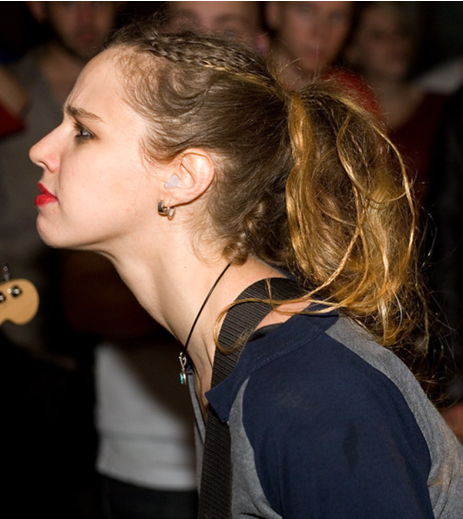 Yula Beeri, then of Star Fucking Hipsters, at a performance in Des Moines in 2008.

Another Leftover Crack song, “Life Is Pain,” shows similar contradictions. The lyrics oppose reproduction, declaring that our genes are too flawed to be worth passing on and calling childbirth “stabbing nature in the back.”

At the same time, it is difficult to imagine someone listening to the song and feeling pessimistic about life. The ska elements are very energetic and may induce dancing. Despite Stza’s avowed hostility to religion, this and other tunes seem like a more effective substitute for gospel music in terms of their ability to lift the listener’s spirits. At times, the harmony evokes the feeling of an organ playing in a cathedral. A similar impression is given even in the anti-church anthem “Feed the Children (Book of Lies).”

Despite framing them lyrically in despairing rather than spiritual terms, Stza deals with many of the same topics traditionally addressed by religion. Perhaps not coincidentally, “life is pain” is one way to translate the First Noble Truth of Buddhism. Criticism of “human nature’s greed and lust,” as he puts it in “Feed the Children,“ is a theme common to Christianity and other world religions. But no positive response to these issues is promoted explicitly in the lyrics.

Not surprisingly, Stza’s tunes denouncing “racism” are the most artless and painful to listen to. This can be seen in “Nazi Punks Fuck Off” by Leftover Crack and “Immigrants & Hypocrites” by Star Fucking Hipsters. Unlike many of his songs, they seem rushed, as if he was in a hurry to be done with an embarrassingly mainstream sentiment for an ostensibly rebellious lyricist. There is nothing uplifting about them musically or lyrically, only negativity, which fits the mentality of anti-racist activists.

Indeed, it is hard to overstate the negativity in Stza’s lyrics. Stza expresses great anger and hatred towards “racists,” homophobes, Christians, mainstream media, US foreign policy, humanity in general, and especially the police. The latter is addressed in Leftover Crack songs such as “One Dead Cop,” which explicitly advises that we “kill cops.” The Star Fucking Hipsters song “Two Cups of Tea” prays for “dead police,” with a particularly poignant musical arrangement intended to emphasize how beautiful the band believes this would be. There are references to violence both as victims and perpetrators; one song on the same album even imagines a scenario of American Christians committing genocide against their own people. It is hard to imagine anything in American life that Stza would be positive about.

A rare exception to this is a passage in the Star Fucking Hipsters song “Empty Lives,” where Stza addresses a population with hopeless lives and “empty eyes:”

I say to you, just try to change
Empty lives can fill again
We’re not doomed by any fate
And it will never be too late

The lyrics further praise “the courage to change and admit your mistakes” and the “will to survive.” But even here, this is juxtaposed with pessimism. After “it will never be too late,” the next two lines are “unless you die like all my friends / meeting silent, jaded ends.”

Cover art for the latest album by Atrocity Solution, parodying the Great Seal of the United States.

The latest release by another American band, Atrocity Solution, is similar to the first two Leftover Crack albums, particularly Fuck World Trade. The latter was generally praised for incorporating more involved compositions, including classical elements, and Atrocity Solution takes this further in Lost Remedies with extended use of piano and strings. Despite anarchic lyrics in songs like “Watch the World Burn,” the chord progressions and song structures are far from chaotic. On the contrary, they speak to a deep human need for order and harmony, and many elements of these songs would have been recognized as beautiful to our ancestors centuries ago. No one who truly felt the contempt for Western cultural heritage and traditional aesthetics — which is fashionable among the radical left — could have produced anything like this.

Crack rock steady is an interesting reflection of Western society as a whole for the past few generations. Genuinely beautiful music is often used as a vehicle for a philosophy of nihilism and resentment. If the musicians have any sympathy with traditional Western aesthetics and spirituality, they are afraid to say so directly. But regardless of what they may intend, the old human instinct for beauty and transcendence comes through in their sound.