Communist Entropy in the Chilean Miracle 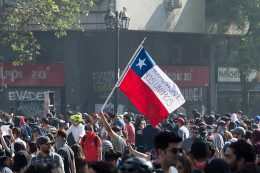 For years, contemporary Chile was considered a remarkable demonstration of the inevitable triumph of economic and political liberalism. Although not being the whitest country in Latin America, democracy and capitalism seemed to flourish through a white-led republic, even though this political elite was not aware of its racial identity.

Whites (approximately twenty percent of the population) are mostly found in the upper and upper-middle classes in the center and south of the country. The explanation for Chile’s success and position as (probably former) leader of the Southern Cone are largely caused by a) the dominance of Hispanic [the term here is being used to mean “Spanish Creole”] culture; b) high levels of respect for law and order; and c) the economic policies implemented by the Chicago School and upheld by the first three post-Pinochet governments (Patricio Aylwin, Eduardo Frei Ruiz-Tagle, and Ricardo Lagos – all of the Leftist Concertación coalition).The stability of democratic norms derived from the Chilean elites’ regicidal tradition and general aversion to political absolutism.

The events that occurred in Chile during October 2019 are the ultimate manifestation of a progressive misrule caused by a previous trauma – the experience of a military dictatorship between 1973 and 1990 – which new generations (who did not consciously experience it) tend to reject, whatever their political tendency. The process of progressive misrule is rooted in the sacrosanctification of democracy beyond the merely discursive by the political class (which is widely of white descent), where democracy itself has poisoned the host, just as radioactive material can poison and kill anyone who uses it without taking precautions.

The subway trains are charred. So are the three ATMs in the station where they stopped. The rails of the underground railway destroyed. Everything down there is completely covered in ashes. The smell of smoke and burnt iron is pungent and it is, at times, difficult to breathe without coughing.

In this widespread discontent of the masses, the Marxist agenda has found a perfect niche for its political goals: In Latin America, class struggle also means race struggle, since the upper and upper-middle classes are the most Europeanized elements. Santiago is not just the capital and largest city of Chile, but also the oldest city. Because of its size, riots are concentrated mainly in Santiago, specifically in its center. A particular trait of Santiago is its color/class segregation; the thirty-two counties of Santiago are quite different across a variety of aspects such as geography, demographics, economics, public infrastructure, and average income. The city’s east side (historically called “the high district”) corresponds to the highest average income area, and is the whitest part of the city. In the city center are the middle class counties; in the southern and northwestern areas, the poorest counties. The riots are currently being moved intentionally (against the cuicos, i.e., the whiter and higher income population) to the east side of the city. And incidentally, in this social crisis, crowds perceive themselves as poor – even those who are not at all poo, or at least not as poor as they think.[1]

Across the country, protesters are launching attacks on symbols of Spanish colonial rule and tearing down statues of war heroes, Spanish conquistadors, military aviation pioneers, and so on. For years, all of them have understood as the oppressors of the poor masses and indigenous people. Now, they are under attack and are being replaced by indigenous symbols.

Regarding this, it must be said that there was a “whitening” of a large part of the Indian tribes due to miscegenation, which created what is today the largest population group (mixed race harnizos and mestizos; none of them pass for Europeans, although they have European ancestry). Even though ten percent of the population is relatively pure Indian, they tend to identify as Indians, perceiving themselves as being closer to the Mapuche, Diaguita, and Aymara peoples.

At the moment, between arson and looting, there are groups of Leftist activists vandalizing buildings, public and private property, retail stores, drug stores, banks, political offices, and throwing rocks at police officers (just like a GG Allin song), asking for a new constitution to replace the one from 1980,[2] and calling for the end of neoliberal policies. Essentially, they want to put an end to the so-called miracle.

So, what is wrong with the Chilean miracle? Why would people prefer to tear down the same economic model that drastically reduced the poverty indices and made life easier? Why has Chile gone crazy?

Indeed, Chile has presented an economic model that allows its people more privileges in comparison to other Latin American countries, and still more compared to the average among the countries of the world. According to the World Happiness Report for the years 2016-2018, Chile ranks at number twenty-six. Moreover, Chile is quantitatively and qualitatively better than it was fifty years ago and is gradually still improving its conditions. While this fact can be corroborated by much data and many studies, the public perception about them is subject to the degree that people’s desires are being satisfied. And since desire continues to increase, likewise the sense of dissatisfaction continues to increase: Perfection is the enemy of the good, and plusquamperfekt is the enemy of the perfect. Due the fact that the younger generations have not experienced the problems of past decades, they have no point of comparison by which to moderate their dissatisfaction.

As we know, because of its foundation and shape, democracy is in an eternal tension with the emergence of its own nitrificated nature: that is, the ochlocracy, that government upon which the fickle crowd imposes its desires. Although this fickle crowd – i.e., the mob – means the majority of human beings, the truth is that this crowd fails to form a monolithic will. It is irrational and lacks the capacity for self-governance. Indeed, it is not a people at all because it lacks the characteristics that define one. Chile is a multicultural, heterogeneous country, and democracy requires homogeneity and thus the elimination of heterogeneity. Chile’s heterogeneous nature has doomed the country to entropy since its birth. October 2019 will be recognized as the final stage of the Right’s metapolitical defeat – the liberal Right.

There are many ways to have democracy; at the same time, governing is not in itself a form of democracy. The latter has been the big mistake made by post-dictatorship countries such as Chile: They have ended up making “government” a synonym for “democracy,” and it is this same excess of democracy (now nitrificated in ochlocracy) that has led these post-dictatorship governments to lead their societies into entropy. This positive increase in entropy causes molecular disorder which, coupled with the low sense of satisfaction among the masses, provides dangerous and unstable reagents for the establishment and maintenance of order.

Desires may have no limitations, but if they are equal with the will – that which seeks to make concrete what is desired through action – entropy suffers a positive increase, giving way to mob rule. When that happens, there is a loss of reason and the establishment of a molecular and holographic tyranny of the desire for bottom-up power (from the masses) and the sacrosanctification of democracy as summum bonum, whereas ὕβρις (hubris) – human outrage and the gods’ punishment – pays for its ambition by sacrificing itself.

[1] Recently, Axel Kaiser, a classical liberal writer and a Chilean of German descent, was assaulted in Switzerland by a Leftist Chilean rabble while he was giving a speech at a university. Axel Kaiser is a diehard supporter of the Chilean free market revolution. That’s why the radical Left hates him.

[2] In the 1980s, this Constitution outlined a regime involving an amalgam of economic neoliberalism (à la von Hayek or Friedman), Catholic and corporatist integralism in the social sphere, and national security in the political realm