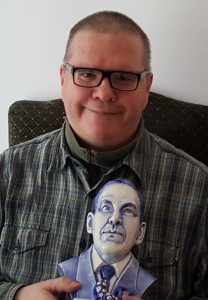 Four lines from an abandoned poem:
Come the time, a season of chaste snow,
And over meadows, birds will greet the dawn,
And you will see where the dead have gone,
There where the sun has shed its final glow. — Leo Yankevich

Your voice gave voice to those who were not heard,
The countless faceless millions who had died
Under the red flagged regime that only
Cared to silence their dissent before the
World caught on. You caught on, and you cast a
Light where once there had been only shadow
And emptiness, void of all regard but
Contempt. You reached in the memory hole
And you revealed these things the world should know:
Come the time, a season of chaste snow,

Obscured the mass graves, and let no one see
That anything had happened to any
One who dissented, anyone who said
No when the Party members requested
Blind allegiance and reporting neighbors.
Nothing but your poetry could have drawn
That history in such a way as to
Lend it grace within the pain. We miss that
And we miss you. As sunlight comes up on
And over meadows, birds will greet the dawn,

Leaves will unfurl to the morning and we
Will start another day. But your day starts
Somewhere else, you’ve left this world of ours to
Join the greats, those immortal voices who
Always claimed you first and took you at last.
We are both sad and joyous. You’re beyond
The hate and outrage, beyond the struggle,
Beyond everything you railed against so
Gallantly. You have reached the dénouement
And you will see where the dead have gone,
Who earn the heavens by exposing hells.
You will not be forgotten, you will not
Fade away, or obscure. History is
With you because truth prevails and beauty
Endures; a great voice is never wholly
Silenced. Poetry preserves what we know,
Keeping it safe for the ages. Farewell
And happy birthday, we celebrate you,
Remember you, and still sense your shadow
There where the sun has shed its final glow.

[1] A Glosa is a formal poem written in tribute from one poet to another. Using a quatrain of the tributed poet’s work, the Glosa is built on four stanzas of ten lines each. Each line of the quatrain becomes the final line of a stanza, and lines 6 and 9 of each stanza rhyme with that line. It is my distinct honor to have written this for Leo Yankevich. I miss his presence in our world.

Please also see Leo’s many works on this site.

« Video of the Day
An Amateur History of Halloween