The High Holy Month of Pride 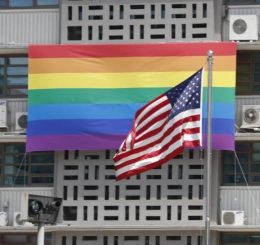 The US embassy in Seoul, South Korea earlier this month.

You’re probably all too aware that June is Pride Month.

Everywhere you go, every time you log into social media, and certainly any time you watch TV, you’re browbeaten to celebrate Pride Month. Rainbow flags adorn bars, hotels, and government buildings. The flag may even adorn the products you buy at the store. Every corporate entity makes sure to wish its customers a happy Pride Month. And gay pride parades are the biggest summer events in many cities nowadays.

Even the official Twitter account for the Alien film franchise feels the need to celebrate gay pride – complete with a rainbow-colored Xenomorph egg:

Thanks to all our fans for being such a great community. Happy #PrideMonth! #Pride pic.twitter.com/A6l51W2bs0

The absurdity of a horror/science fiction franchise celebrating Pride Month is telling regarding its importance in modern Western society. It’s liberalism’s high holy month, featuring its fundamental values of consumerism and hedonism. Its celebrants adhere to a rootless, transient identity dependent on corporate products, bad YouTube videos, and sexual desire. There is no connection to the past, no connection to authentic traditions, and no connection to a higher purpose. It’s all about finding the right twink on Grindr.

To corporations and government bureaucracies, Pride Month is more important than Easter. You can be charged with a hate crime if you burn a rainbow flag – although you surely won’t be if you torch a crucifix. Indeed, the only holiday more important than this gay celebration is Christmas – and that’s not because the elites care deeply about the birth of Christ, it’s because they sell more stuff during the now-officially renamed “holiday” season.

Changing social mores partially explain Pride’s prevalence. Just a little over ten years ago, a majority of Californians voted to ban gay marriage. Today, the story of Harvey Milk and radical gender theory are taught in California’s elementary schools. The culture war over homosexuality is over, and the gays won handily. Pride Month is their victory lap.

Pride also promotes minority identity politics against evil, historic America. LGBT (or whatever acronym is favored today) offers an identity to Americans who want to separate themselves from the straight, white masses. You may be a white man, but waving the rainbow flag puts you on the non-whites’ side. You can only have pride in your identity if it sets you apart from the white majority. Whites don’t get their pride month, you know.

Gay pride empowers every person who feels alienated from traditional cultural norms to fly their freak flag and twerk on hetero supremacy.

The most important reason why Pride is now everywhere is because it encourages consumerism. Corporations can easily market their products in June with a simple rainbow design. The biggest holidays in America are the most commercialized. Easter, the holiest of days for Christians, is given less stature because it’s less commercial. Christmas and Halloween are huge because they are ripe for marketing. The same goes for Pride Month.

This June has seen some of the most bizarre corporate advertising to date. Budweiser has unveiled a plethora of pride-flagged beer bottles to mark the occasion. The famous beer company isn’t just sticking to the rainbow flag, either – it is also offering specially designed bottles for every sexual orientation imaginable. There is one for pansexuals, bisexuals, and even asexuals. Budweiser also made sure to have an “inclusive” rainbow flag that has black and brown stripes to better represent non-white gays.

Their tweets look more like the work of a Murdoch Murdoch skit than that of a legitimate corporation:

In 2017 the city of Philadelphia added a black and brown stripe to the classic rainbow design, to better represent people of colour within the community. It has since been flown at Prides around the world. pic.twitter.com/EAWDUaUocs

Uber tweeted out their pride by pointing out that they have an open asexual driving for them. “Our Driver-partner, Heather, is inspiring others simply by standing proudly as an asexual,” the rideshare service tweeted. And Heather’s story was just one of many Uber shared on its Website. The company also highlighted Rodrigo and how he broke free from his religious Brazilian family to embrace his sexuality in Amsterdam. All the stories convey the same message: cut the roots that bind you and liberate your desires with the help of the gig economy. You may not have a stable income or a family, but at least you will get to have sex with whomever you want!

This installation is a literal sign that everyone deserves to be accepted no matter what. #AcceptanceMatters pic.twitter.com/Nu8gHkBUaQ

The US government also wants to spread Pride worldwide. President Trump became the first Republican president to wish gays a happy Pride Month this year. Trump promised to make homosexuality legal throughout the world in his appeal to a community that hates him. On the last day of the apparently straight month of May, he tweeted:

As we celebrate LGBT Pride Month and recognize the outstanding contributions LGBT people have made to our great Nation, let us also stand in solidarity with the many LGBT people who live in dozens of countries worldwide that punish, imprison, or even execute individuals on the basis of their sexual orientation. My Administration has launched a global campaign to decriminalize homosexuality and invite all nations to join us in this effort!

The White House already made progress toward its goal this month with Botswana legalizing homosexuality. Trump propagandist Charlie Kirk touted it as a massive success. Apparently, progress for gays in Botswana makes America great again.

But Pride wasn’t adequately spread by the administration, according to its most ardent advocates. The State Department instructed American embassies not to fly the rainbow flag in June; many of the embassies’ staffs were outraged by this directive and flew the pride flag right below Old Glory, anyway. And the National Security Agency felt secure enough to decorate its compound in rainbow colors for its own Pride Month tweet:

At NSA, talented individuals of all backgrounds, contribute to something bigger than themselves: national security. #PrideMonth pic.twitter.com/7Vippgti4m

LGBT pride is a value that the American elite want to promote around the world. To its advocates, gay pride means love and acceptance: love who you want, love always wins, love knows no sex, race, creed – and so on. America stands for these sacred values when it flies the gay flag above its embassies. Liberals rejoice, but non-Westerners are likely to be disgusted – especially when they find out what goes on at pride parades. They might, for example, see the video of black DC Pride marchers swarming a cop car and grinding on it:

Or, they could see the child drag queens the media loves to promote.

Or, they could read this HuffPo article about why it’s good to expose young children to kink. According to S. Bear Bergman:

Non-Westerners probably won’t conclude that this is all just “love.”  And they would be right. Pride Month is not a celebration of love, but of unfettered pleasure. The parades testify to that.

This month-long celebration of “alternative lifestyles” is the perfect holiday for a decadent West. It offers no message besides “seek pleasure” and “buy more stuff,” the two core messages of late capitalism. It aims to eradicate traditions and values that stand in its way. It’s not a time to remember sacrifice to a higher, immaterial purpose. It’s all about the individual and his desires. 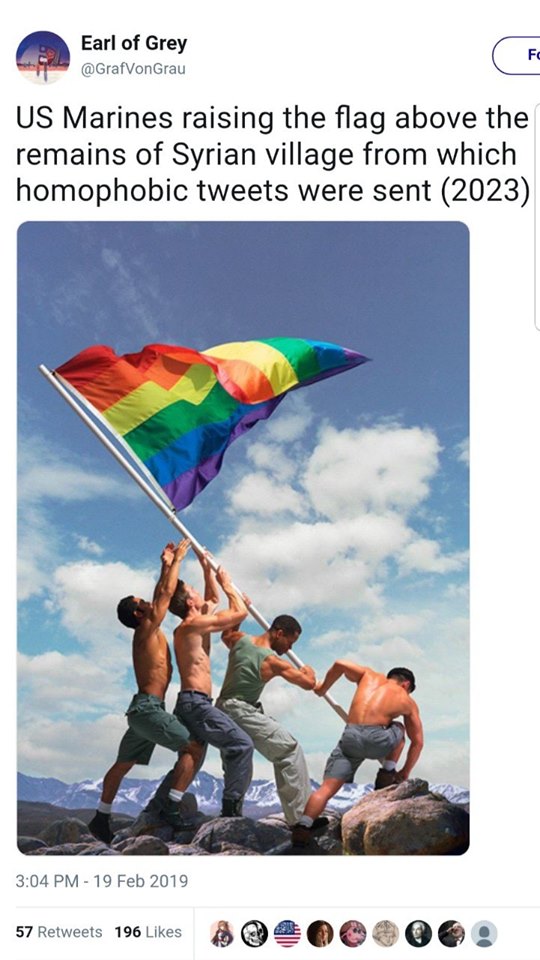 The Real Story of the Oberlin Shoplifters:
Who are Jonathan Aladin, Endia Lawrence, & Cecelia Whettstone? »