Drink Leninade! You Have Nothing to Lose but Your Lives! 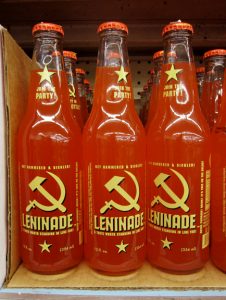 So I had an extremely curious moment recently when an acquaintance of mine showed me a bottle of soda she had found. It’s called Leninade, or, in Russian, ЛЕНИНАД, and features an image of our dear friend Vladimir Ilich chugging down a bottle of this cool, refreshing drink. Clearly a kitsch product relying on fuzzy Cold War memories to sell units, the concept of this soda is as tasteless as they come (as for the soda itself, keep reading).

Yes, I get the irony of invoking one of history’s most stalwart communists to shamelessly promote some cheap capitalistic venture like Leninade. It’s clever. But it’s clearly not real in the same way that Samuel Adams beer and Dolly Madison snack cakes are real; that is, a product using reverence for a historical personage as a selling point. No, in this case, Real Soda In Real Bottles Ltd., the soda’s manufacturers, decided to turn both Lenin and the Soviet Union into cartoons. We’re supposed to laugh before we drink, sort of like Kulaks downing shots of vodka at their dinner tables in July 1914.

Here are close-ups of the front and back of the bottle: 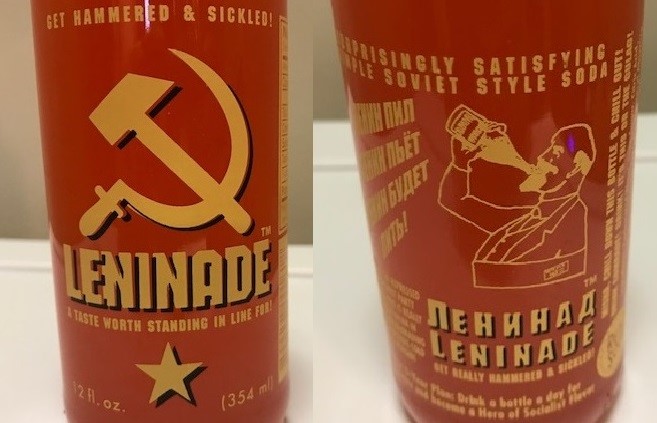 And here is a panoramic shot of the back of the bottle so you can see all the text: 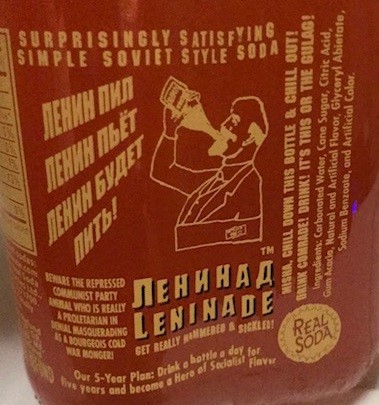 In case the images are hard to read, here’s is the text (and note the Nietzschean use and abuse of exclamation points).

This is appalling for two reasons. For one (in theeeck Roossian accent), in spirit of make fun of Rooski-yazikoo, indefinite articles named ‘a’ should not have existed in sentence on back since Rooski-yazikoo does not contain articles.

Secondly, and most importantly, appropriating catchphrases and historical figures from the one of the most murderous regimes in history in the spirit of fun without making said regime or historical figures the butt of the joke is deeply offensive to those who actually know or care about the millions of lives this regime destroyed. By not doing this, the soda actually makes the victims of the Soviet Union the butt of the joke (because, like, who else is there?). But since very few of such people can still be found outside of Siberia, let alone in the West, the manufacturers of Leninade probably figured that no one willing to shell out a buck-and-a-half for their product would notice or care.

So, who remembers this commercial?

These employ similar Soviet-based humor. However, unlike Leninade, they are actually funny because the humor comes at the Soviet Union’s expense. The Soviet Union was a bad place and therefore deserves mockery. Ex-Soviet people, even ones who did time in gulags, would no doubt see the humor in these ads.

Now, compare those ads to this one, which has a little fun with 9-11.

This ad is not funny, largely because it fails to make the terrorists responsible for 9-11 the butt of the joke. Since the people killed on 9-11 consist of guilty perpetrators and innocent victims, this omission by default makes the victims themselves the butt of the joke. Like those people deserved to get incinerated that Tuesday morning. Not true and not funny.

Leninade resembles the 9-11 ad because it relies on apathy or a superficial understanding of history in order to do two things: to get a laugh and to make a buck. Is this why we remember the millions of white Ukrainians who perished in the Holodomor? Is this why we remember the untold millions of white Soviet citizens who died in the Gulag Archipelago? Is this also why we remember the political prisoners at the Kolyma labor camp in 1938 who were forced to work fourteen hour days in temperatures as low as sixty degrees below zero Fahrenheit, or the unlucky peasant who was sentenced to eight years in the gulag in 1947 because he fed a starving bull calf some beets, or the poor tailor who got locked up for ten years because he inadvertently inserted a pin into a newspaper photograph of Lazar Kaganovich? So oblivious Americans can get tooth decay drinking Leninade? So some ad executive somewhere could get a $500 bonus check because he found a cute historical hook with which some soda company could attract more customers?

Are we beginning to feel a little bit weird about Leninade? What started out as a questionable gag for people old enough to remember the Berlin Wall is turning into something pretty insidious. Once you have bitten from the fruit of knowledge about the Soviet Union, it’s hard to laugh it off. This becomes even more apparent when we realize that much of our leftist leadership today in the United States and Europe would bring back the Soviet Union or something like it if it could. It’s in our past, but it could very well be in our future too. We should know what happened there, and this information should not be coming from soda bottles.

I understand that many of the people reading this are not exactly fans of the Jews. But I think in the case of Leninade perhaps white advocates should start thinking about emulating our Hebraic brethren. We already kind of do that when we call for a white ethnostate (after all, Israel is a Jewish ethnostate), so perhaps this idea won’t be too hard for most of us to swallow. Suppose, for example, a soda company had decided to make Hitlerale instead of Leninade. Suppose they had cleverly co-opted slogans and historical tidbits from the Third Reich and made a bunch of bad puns while hawking their product? All in good fun, of course. I can see it now…

How long do you think it would take for Jewish organizations like the ADL and the SPLC to strip that company bare like a swarm of piranhas? Any business that takes a Springtime for Hitler approach to its advertising will face a lethal organized attack from the many organs of Jewish power. It will happen quickly, and it will happen ruthlessly.

So then why is it that Jews can leap into effective action at the slightest provocation while white gentiles don’t even notice when provoked in a similar manner? From 1917 to 1953, Lenin and the regime he created killed far more whites than Hitler killed Jews (and that’s while the Soviet Union had a highly disproportionate number of Jews in positions of power). One would think there would be quite a few white people a little bent out of shape over such an insult. But no.

We don’t remember, you see.

If we don’t remember, then it might as well not have happened.

In October 2016, I wrote an article about a similar case of collective amnesia called “The Great Forgetting.” One of the reasons why white Western Europeans are allowing their homelands to be overrun by Muslims from the Middle East and North Africa is because they have completely forgotten all about how once upon a time the Saracens and the Ottomans and the Mussulmen had waged war against Europe and enslaved her populations for centuries. They didn’t call Grand Vezir Kara Mustafa “The Scourge of God” for nothing, you know.

From “The Great Forgetting”:

Even up to the mid-twentieth century, most whites knew—or, really, remembered through their communal folk wisdom—the existential threat of Islam and the barbaric behavior of Muslims. It was common knowledge in fact. In English we have the expression “the coast is clear.” Why are we so concerned about coasts being clear? Because for centuries Muslim slave-raiders in their speedy corsairs would abduct white Christians along the coasts of Southern and Western Europe. According to Robert Davis in his indispensable Christian Slaves, Muslim Masters, they took between 1 and 1.25 million white slaves from 1500 to 1800. That’s around 9-to-12 per day.

Notice how, with all the grooming gang scandals and terrorist attacks and no-go zones and high rates of crime and rape throughout Western Europe, that history is beginning to repeat itself. The Saracens, the Ottomans, and the Mussulmen, known today as “refugees” or “migrants,” are beginning that conquest of Europe that they had always wanted. All because white people were stupid enough to forget.

And if history is repeating itself with Islam, what makes us think it won’t repeat itself with the Soviet Union?

If we are going to be serious about this thing, we are going to have to organize like Jews and learn how to wage lawfare as a collective, white-identitarian group. And we should leave mercy for the suckers. I hate to have to say this, but this is how our enemies behave, so we should too. For example, MSNBC gave the anti-white bigot Al Sharpton his own talk show. More recently, the ADL brags about getting white advocate Jared Taylor booted off of Twitter. Are these two entities and countless others going to apologize for their hatred of white people and then reverse course? Probably not. They see white people as weak and pay no political price for maligning us and encroaching upon our freedoms. They will push us as far as we will let them.

Let’s not let them push us any longer.

If you’re a young white identitarian and you have the time, get a law degree and see what can be done about this. Maybe one day we will be able to unleash our own swarm of pirhanas. And then the contempt that non-whites feel for us today will turn to respect tomorrow, or perhaps even fear. There really is no other way. 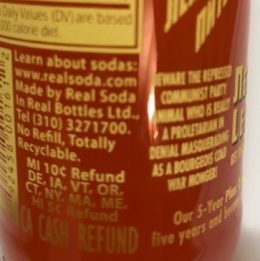 In the meantime perhaps some of us can contact Real Soda In Real Bottles Ltd. and voice our displeasure. On the bottle it says their web address is www.realsoda.com and their phone number is (310) 327-1700.

Who knows? Maybe a concerted effort on our part will make a positive difference, hopefully the first of many. But we’ve got to start somewhere.

As for Leninade itself, it’s actually not bad as far as soda pop goes. It has a unique flavor and is sweet but not cloying. You could do a lot worse when you’re thirsty on a hot day. And speaking of a lot worse, it’s interesting that Leninade bills itself as a “Soviet style soda.” I have experience with actual Soviet-style soda (or, at least, the modern equivalent), and I can assure everyone that Leninade is about as Soviet-styled as Coca-Cola. The real Soviet soda I have sampled is called Кваѕѕ (pronounced ‘kvass’). It is without a doubt the most vile beverage I have ever encountered. It tastes like rancid beer. I think it’s made from carbonated water, sugar, and bread crumbs. I know that in the 1970s and 1980s they used to serve the stuff up from trucks in the street, and people would get all excited. Yes, where in America we have the ice cream man, in the Soviet Union they had the Кваѕѕ man. Maybe it’s an acquired taste, I don’t know. I don’t mean to offend any Eastern European readers who actually like the stuff, but I gagged on it. Just imagining how generations of innocent Soviet citizens actually enjoyed such a beverage boggles the mind.

But I’m sure we can all agree that if we actually followed Leninade’s hysterical instructions we would end up in a world with a lot more Кваѕѕ and a lot less Leninade.