The Fall of the Roman Empire (1964): Or, the Multicultural Dream That Was Rome 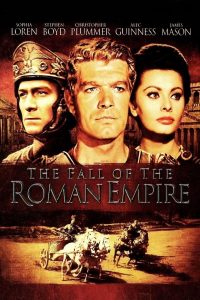 Cultural hygiene is a must. Every day, you must try to consume culture that is educational, that elevates your soul, but also culture which puts you in sync with your society. That is a tough dilemma.

Thus, I am on the lookout for old, good films. Generally speaking, older is better.

The Fall of the Roman Empire (1964) is an amusing epic, especially if you can enjoy the Sixties kitsch. The film is attractive in that it does try to show some aspects of Roman life which most films ignore: the animal sacrifices for omens, the Roman saluting, the enthusiastic “Hails Caesars.”

There is a lot of fascist energy in this movie.

The film is, at the same time, shockingly politicized. The basic message is that the Roman Empire fell because its people and rulers became too corrupt and selfish to embrace the glories of multiculturalism. Really.

Like the later Gladiator (2000), The Fall of the Roman Empire focuses on the final days of the philosopher-emperor Marcus Aurelius and the misrule of his tyrannical son Commodus. The film features gentiles, most beautiful gentiles: Alec Guinness as a wise and stoic Marcus Aurelius, Sophia Loren as his passionate and theatrically dramatic daughter Lucilla, and Stephen Boyd as the blue-eyed, blond-haired, too-honorable, and somewhat dimwitted general Livius. Omar Sharif is typecast as a creepy Levantine (the King of Armenia).

The fascist energy and egalitarian-globalist message are summed up in an impressive early military parade scene, with diverse units from all the nations of the vast Roman Empire appearing to salute their emperor. These include Judeans (with prominent stars of David on their shields) and Africans (including a black or two), both saluted by Marcus. The emperor, strangely if somewhat humorously, cannot remember the names of all the officers and nations appearing before him, including “Pericles of Athens.”

Few mainstream films will have featured so many unironic and positively-portrayed Roman salutes and “hails” as in this film.

Marcus gives a speech to the troops: their unity despite their diversity is the strength of the Roman empire, “whatever the color of your skin” [sic], as “a family of equal nations.” Almost as if the gods themselves wish to strike down Marcus for these words, the emperor feels a sudden pain in his chest, presaging his death.

In truth, the cosmopolitan sentiment is not alien to historical Marcus Aurelius. As a Stoic, Marcus considered himself to be both a citizen of Rome and of the universe, and like many people, tended to underestimate the role of ancestry in shaping human reason. However the phrasing is blatantly a wink to the then-boiling racial controversies of the 1960s. The Romans never, as far as I am aware, discussed “skin color” as a kind of prejudice to be overcome.

In the film, Marcus dies. His psychopathically selfish and unstable son Commodus rules in his stead. The major issue: will the empire accept the Germanic tribesmen as equals and fellow Roman citizens, rather than wage constant war against them? Of course, the wise and philosophical Marcus would have taken them in, we are told. The issue is summed in an incredible scene in the Roman Senate, in which the corrupt Cleander (at 06:50) is made to voice the “fascist” position with stunning clarity: “Equality, freedom, peace: who is it that uses these words but Greeks and Jews and slaves?” To which a liberal answers: “Honorable Fathers, we have changed the world – can we not change ourselves?”

The Senate decides in favor of the Germans and universal brotherhood. The Greek philosopher Timonides, the voice of reason, a man who has to overcome Roman bigotry against Greeks, celebrates: “Now can we say to our Senate, to our empire, to the whole world, look! Here we meet in friendship, the blond people from the north and the dark people from the south. What we have done here could be done the whole world over.”

The Germans are all long-haired red-headed and blonde beasts, practically cave-men. The battle scenes are, to my postmodern eyes, rather awkward bloodless brawls. (The film has aged badly in other ways: e.g. a rather ludicrous chariot race complete with close-ups. But you can enjoy these scenes if you don’t take them too seriously.)

The Nords are happily settled within the Empire and begin to prosper, only to be irrationally cut down by Commodus’ soldiers. Timonides tries to tell the soldiers:

[The Germans] have become your brothers. Let them live in peace, they are Romans now. . . . The whole northern people will answer with death and fire. Their hatred will live for centuries to come. Rivers of Roman blood will pay for this. You will make nations of killers out of them . . .

. . . before being unceremoniously struck down.

Und so weiter. Long story short, Rome was too corrupt and selfish for Marcus’ universalist dream, and so was doomed to fall.

The Fall of the Roman Empire was produced by Samuel Bronston, the nephew of Leon Trotsky (Lev Bronstein). The film cost $19 million but was a box office failure. According to Wikipedia, this bankrupted Bronston, who was then involved in various financial shenanigans and perjury.

The film was written by Ben Barzman, Philip Yordan, and Basilio Franchina.

Ben Barzman was a Canadian Jewish communist who was blacklisted during the McCarthy era. His wife Norma had been a member of the Community Party U.S.A. Philip Yordan, also Jewish, was not blacklisted as a communist subversive himself, but would provide a respectable “front” for blacklisted writers like Bernard Gordon (also Jewish) to get their work out there.

Basilio Franchina was an Italian who notably gave Roberto Rossellini the idea for the 1948 pro-German anti-war film Germania anno zero.

It is normal for artists to project their contemporary issues onto the past. This should not overwhelm the past however, which is after all an interesting place in its own right. I was quite surprised (though I guess I should not be) at just how much the globalist message is apparent in an ostensibly apolitical film as old as this. Marcus Aurelius’ idealistic project in Gladiator, similarly cut short by his unjust death and Commodus’ misrule, is distinctly vaguer, being no more than an inchoate “dream that was Rome,” presumably some kind of non-corrupt, non-authoritarian “republic.” This is in keeping with the intellectual fuzziness and unchallengeable ideology hegemony of liberalism in the 1990s.

The gentiles, so beautiful, so soppy, they just say what you want.

« The Spirit of Poland