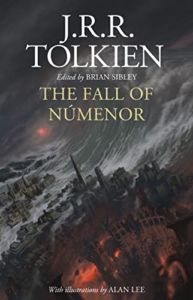 J. R. R. Tolkien (ed. by Brian Sibley)
The Fall of Númenor and Other Tales from the Second Age of Middle-earth
New York: HarperCollins, 2022

The Fall of Númenor is a compilation of Tolkien’s writings on the Second Age of Middle-earth. Its central plotline is the rise and fall of the island kingdom of Númenor, which Tolkien modeled after Atlantis.

Following in Christopher Tolkien’s footsteps, editor Brian Sibley, known for his radio dramatizations of The Lord of the Rings and other works, has taken extracts pertaining to the Second Age from multiple sources — The Silmarillion, Unfinished Tales, The History of Middle-earth, The Nature of Middle-earth, The Letters of J. R. R. Tolkien, and The Lord of the Rings — and arranged them in chronological order. The texts are accompanied by ten color illustrations and dozens of sketches by Alan Lee.

I approached The Fall of Númenor with some apprehension. It is the first posthumously published Tolkien volume not edited by the late Christopher Tolkien (who wrote in 2018 that The Fall of Gondolin would be the last Tolkien publication), and its release was obviously timed to coincide with Amazon’s Rings of Power, which is set during the Second Age. Presumably, the Tolkien estate wanted to cash in on the series. In spite of this questionable motive, I am pleased to say that The Fall of Númenor is a worthy addition to one’s library. Sibley is a thoughtful, knowledgeable editor whose respect for Tolkien, as well as Christopher Tolkien’s scholarship, is evident. Lee’s illustrations are also excellent.

Unlike The Fall of Gondolin and Beren and Lúthien, The Fall of Númenor does not contain each version of the stories presented here in its entirety. Instead, Sibley has opted to avoid redundancy and create a streamlined narrative. The book feels more or less coherent despite containing multiple storylines and texts drawn from several sources, all meticulously cited. It is useful to be able to read Tolkien’s Second Age writings in this format.

The chapter titles are taken from the chronology provided by Tolkien in “The Tale of Years,” Appendix B to The Lord of the Rings. For each chapter, Sibley has selected excerpts relevant to the time period in question. He occasionally inserts editorial asides to add context or provide linkages between excerpts from different sources. For instance, in “Sauron overruns Eriador,” Sibley juxtaposes a paragraph about Sauron’s westward march to Eriador with the Song of Durin from The Fellowship of the Ring, noting that Sauron destroyed the once-great city of Khazad-dûm as he marched across Middle-earth. (One of Alan Lee’s most striking illustrations depicts Galadriel passing through Khazad-dûm at its height on her journey from Eregion to Lórinand [Lothlórien]. It almost has an Art Deco feel.)

The first several chapters of this volume describe Númenor’s early history, geography, and flora and fauna as well as the customs and characteristics of the Númenóreans. Númenor was brought into existence by the immortal Valar and Maiar, who bequeathed it to the Edain (a race of Men). The first king of Númenor was the half-Elven Elros, brother of Elrond, who, in contrast to his brother, chose the fate of Men. From the beginning, Númenor had a strong connection to the Eldar. Due to Elvish influence, “[the Númenóreans’] knowledge and arts reached almost an Elvish height” (p. 93). Nearly all Númenóreans spoke Sindarin as a second language. The nobles spoke Sindarin as their mother tongue, and royal titles were styled in Quenya. The Eldar often visited Númenor, but the Númenóreans, being mortal, were forbidden from sailing to Valinor.

The Númenóreans are described as a tall, strong, and warlike race. They excelled in crafts, particularly metallurgy and ship-building, and had a penchant for seafaring (Elros’ father was Eärendil, “lover of the sea”). They possessed noble and pure characters, though their characters were corrupted with the advent of the Shadow. 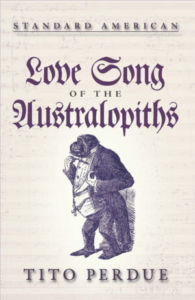 You can buy Tito Perdue’s Love Song of the Australopiths here.

As Númenor grew in strength, Sauron was building the fortress of Barad-dûr and plotting to take over Middle-earth. He manipulated the Elves of Eregion into forging the Rings of Power, whereupon he secretly forged the One Ring in Mount Doom. When Sauron realized that the Elves were no longer fooled by him, he instigated the War of the Elves and Sauron. With the help of the Númenóreans, Sauron was defeated, though he would soon return.

By this time Númenor had become a powerful maritime empire, with colonies in Middle-earth. The Númenóreans began to thirst for more power and riches and turned against the Valar and the Eldar, whose immortality they envied. Those who remained faithful to the Valar or spoke Elven tongues were persecuted, and Númenorean rulers ceased to use Quenya-styled royal titles.

Sauron loathed the Númenóreans because of their historic allegiance to the Valar and kinship with the Eldar. He cunningly exploited their lust for power by cozying up to Ar-Pharazôn, then the ruler of Númenor, and flattering his delusions of grandeur. Sauron urged him sail to Valinor, knowing that this would bring about the Númenóreans’ downfall. He also constructed a temple to Melkor, where human sacrifice was practiced.

The political climate in Númenor at this time was characterized by

. . . the withdrawal of the besotted and aging king from the public view, the unexplained disappearance of people unpopular with the ‘government’, informers, prisons, torture, secrecy, fear of the night; propaganda in the form of the ‘rewriting of history’; . . . the multiplication of weapons of war, the purpose of which is concealed but guessed at; and behind all the dreadful figure of Sauron, the real power, surveying the whole land from the Mountain of Númenor. (p. 374)

Ar-Pharazôn launched an assault on Valinor, to which Eru Ilúvatar responded by drowning Númenor and her people in an earth-shaking cataclysm of biblical proportions. All Númenóreans perished except those who had remained faithful to the Valar. Elendil, the son of the Númenórean ruler Tar-Amandil, and his sons Isildur and Anárion escaped to Middle-earth, where they founded the kingdoms of Arnor and Gondor. Aragorn, of course, was a direct descendant of Isildur.

Tolkien’s first attempt at reworking the legend of Atlantis was his unfinished novel The Lost Road, which is unusual among his works for its exploration of time travel. (The “Númenórean chapters” from The Lost Road and some of Christopher Tolkien’s comments on them are reprinted in this volume in an appendix.) The first chapter describes a boy, “Alboin,” who one day asks his father, Oswin, about his name’s origin. “Alboin” is cognate with the Old English “Ælfwine,” or “Elf-friend.” Later on, as an adult and a father himself, he has a dream in which he is visited by Elendil, who invites him to travel back in time: “I was of Númenor, the father of many fathers before you. I am Elendil, that is in Eressëan ‘Elf-friend,’ and many have been called so since.”[1]

Christopher Tolkien writes that the character of Alboin, a scholar fascinated by language and mythology, was autobiographical.[2] (His son Audoin, a “voracious listener” who shares his interests, resembles Christopher.) It would perhaps not be too far-fetched to describe Tolkien as a spiritual heir to Elendil, who, as one of the few members of the “Faithful,” sought to preserve vestiges of his culture (the Seven Stones and the White Tree) amid civilizational collapse. “The father of many fathers before you” implies that the connection between Elendil and Alboin goes beyond merely a linguistic one.

Is it a coincidence that Númenor was an island nation and a maritime empire? Perhaps. Regardless, Númenor’s fate reflects Tolkien’s distaste for imperialism. He wrote to his son in 1945 that British and American imperialism in the Far East filled him with “regret and disgust.”[3] He had a deep love for England, but “not Great Britain and certainly not the British Commonwealth (grr!).”[4]

It is hard not to see America as a modern-day Númenor. The US Navy’s modernization and expansion in the 1880s and ‘90s and the acquisition of the Philippines at the end of the Spanish-American War marked America’s transition from an isolationist republic into a thalassocratic empire and inaugurated an era of free-trade imperialism.

Elendil and his sons, like Tuor from the The Fall of Gondolin, call to mind Aeneas and other heroes who underwent exile, a common theme in mythology. It is through exile and adversity that a hero’s strength of character is formed, imbuing him with the determination to triumph and reclaim his birthright. The saga of Númenor thus does not end wholly in tragedy, as its downfall signifies a new beginning.