On Right-Wing Primal Urges (or, Everything You Ever Wanted to Know about Debating with Yourself over Politics in the Wee Hours of the Morning, and Forgot to Ask) 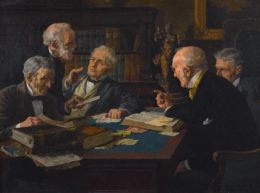 Much of the friction within the Right in this country, and especially on the Dissident Right, can be rendered into a schematic conflict between two primal urges of the spirit. I call these the Republican Urge and the Monarchal Urge. Everyone on the Right has these urges, and falls into one of three categories. Either the Republican Urge dominates, the Monarchal Urge dominates, or they coexist in a person’s mind. These are extremely important distinctions, because people who fall into the first two categories may engage in bitter disputes with each other despite sharing identical racial identities and political goals.

And sometimes these disputes can become mutually destructive when they don’t need to be.

Donald Trump is the prime lightning rod for this kind of behavior, but there are many others. Whenever you see people on the Right arguing over a certain high-profile Right-wing individual (usually a pundit, activist, or politician), ask yourself if the core dispute isn’t really Monarchism versus Republicanism. Ask yourself whether the people locking horns belong in either of the first two categories, the identity of which may or may not be of greater importance to them than identifying with the Right versus the Left.

Before continuing, however, let’s get some terminology straight.

By “Republican” I don’t mean the Republican Party. I’m referring to “republicanism,” the political order in which, according to Webster’s, “supreme power is held by a body of citizens who are entitled to vote for officers and representatives responsible to them” — that is, not a monarchy. There are likely many ways to determine if the Republican Urge dominates in a person, but one way I consider useful relates to timing. Do they want demonstrable change in the near future? Or are they happy with evolutionary change, as long as it goes in their preferred direction? If it’s the latter, then their Republican Urge probably dominates.

I’m reminded of what Russell Kirk wrote in his classic The Conservative Mind:

In the view of men like [Edmund] Burke and [Sir Walter] Scott, the slowness and clumsiness of old-fashioned law must be tolerated (at least until gradual adjustment may be arranged) for the sake of the safeguards to liberty and property that wither away in any legal system which accords pride of place to speed and neatness. Laws and courts do indeed require constant careful scrutiny and cautious renovation or improvement; but though they may sometimes even require wholesale reformation, still, when that reformation comes, it ought to be conducted after the fashion of Burke’s Economical Reform—with tenderness toward ancient prerogatives, with every precaution to make sure that no person or class suffers a particular injustice in the name of some seeming general benefit.

The Republican Urge is a slow urge, always maintaining that a president or head of state can act only by the majority consent of the governing class. Better not to act at all than to betray one’s mandate. These days, the governing class is mildly anti-white and getting more so every day — and their mandate reflects this. A person with a dominant Republican Urge would be happy with making such a mandate less anti-white, even if that mandate remains anti-white.

By “Monarchal,” on the other hand, I don’t mean that a person with such an urge necessarily wants to be ruled by a monarch or autocrat. Instead, they express a general impatience with the republican system we have (or supposedly have) today — the essence of which is described by Kirk above. They don’t want to wait. They want Right-wing leaders who are honest, honorable, and who are willing to bypass whatever unconstitutional mandate our anti-white governing class imposes on their leadership and everyone else — as if by fiat. Since being on the Right these days means either being pro-white or anti-anti-white, people with the Monarchal Urge crave candidates, activists, and pundits to be outspoken white advocates. And if you’re sniffed out as a fake white advocate, then they have no use for you, even if you do things that benefit white people.

So, given the positives and negatives of both sides, which I hope I have clearly defined, one can see all the fertile ground for internecine squabbles on the Right. Take Donald Trump: In 2016 the man, whether deliberately or not, campaigned by appealing to the Right’s Monarchal Urges and was perhaps the first major presidential candidate since the Second World War to do so. This got a lot of people excited. Consider: building a wall, putting Hillary Clinton in jail, and draining the swamp all sound like fast Monarchal changes when slow Republican changes were all that most on the Right had been accustomed to back in 2016.

Yet upon entering the White House, Trump governed more according to the slower, Republican Urges of the Right — again, whether deliberately or not. Those on the Right with dominant Republican Urges were more or less satisfied with this and inclined to highlight Trump’s successes and downplay his failings, even when his failings included betraying or neglecting his base and catering to his demographic enemies. On the other hand, those with dominant Monarchal Urges focused on Trump’s mendacity and letdowns and professed not to be impressed with his successes, even when Trump was probably the best political thing to happen to American whites since 1965.

Here is this conflict encapsulated in dialogue — and all you drama students out there, take note:

REPUBLICAN URGE (RU): I do, too. But in our constitutional republic, rapid change is impossible. Be happy with gradual change.

MU: We don’t have time for gradual change. The demographic clock is ticking. I want change now.

RU: Okay, but implementing rapid change would violate the rules of our constitutional republic. Be happy with gradual change.

MU: The Left stole the 2020 election. Since when does the Left care about the rules of our constitutional republic? I want change now.

RU: Our constitutional republic is the best form of government in history. It has served us well for 250 years. If we violate its rules, it will break down and ultimately be replaced by something far worse. Be happy with gradual change.

MU: 20 years ago, we didn’t have trannies in kindergartens, and now we do.

MU: 20 year ago, we didn’t have get-out-of-jail-free cards for black thugs and Communist terrorists, and now we do.

MU: 20 years ago, white advocates and prominent conservatives were not getting deplatformed and harassed by the FBI, and now they are.

RU: I agree that sucks, but—

MU: 20 years ago, we didn’t have anti-white Critical Race Theory being taught to children, and now we do.

MU: 20 years ago, whites were not less than 60% of the American population, and now we are.

MU: So, why should I be happy with gradual change when the Left clearly isn’t?

MU: Oh, got nothing to say to that one, smart guy? Tell me, how will your “constitutional republic” and your John Locke and Edmund Burke and Friedrich Hayek save you in 2042 when you get arrested for racism, anti-Semitism, homophobia, and transphobia because you used semi-lethal force to stop a black-Jewish tranny drag queen from raping your 12-year-old son?

MU: No, it isn’t. It is exactly where we are headed. How can we as a people support anyone who doesn’t stand in the way of this degenerate Leftist evil — an evil which will consume all of Western civilization within our lifetime if we let it! So this is why I support fascism. Fascism is the only form of government that will stop this evil in its tracks and give us change when we need it. Which is now!

RU: Is that right?

RU: Well, I tell you what. If you want rapid change that badly, why don’t you go start a war? Because that’s the only way you’re gonna get it!

RU: Seriously. The Reds are at the gates, like they were in 1917. There’s Poland, just asking to be invaded. What are you waiting for, John Wayne? Find a Fort Sumter somewhere and blow it up. Unfurl your swastika, your stars and bars, your double eagle; get your Panzer Corps and your Luftwaffe in order; arm your guys with Mausers and Lugers and dress ‘em up in snazzy period uniforms, and then march on Washington whistling Dixie! Sounds like a winner already.

RU: Translation: You don’t have the balls to start a war or do anything other than go tap-tap-tap on your keyboard and pine for long-defunct political systems. So, unless you plan to accomplish something in the real world, shut the fuck up, get your fat ass in gear, and help me get Laura Loomer elected to Congress in 2024!

MU: Oh, I can’t support her. She’s a fraud. She lied once about getting her tires slashed. She’s doxed people. I don’t think she really cares about white people. And that droning voice. God, no. Plus, she’s Jewish. Maybe.

MU: Got nothing to say to that one, smart guy?

So when a Republican-dominant person meets a Monarchal-dominant person, they’ll likely disagree on a lot of things. They may even have more in common with their opponents on the Left than they do with each other. This would explain some of the fierce conflicts we’ve seen on the Right in the past few years, wouldn’t it?

The only way out of this, it seems, is for everyone to make an effort to get into the third category mentioned above: the one in which both urges coexist in a person’s mind. It’s what I do. It helps keep me sane. If one urge were to permanently dominate the other, then I would be a middle-aged professional with a career, wife, and family, or a fire-breathing dissident who writes super-excellent essays and novels — but I couldn’t be both. Thus I compartmentalize. When I am with my family, neighbors, and colleagues, my Republican urge dominates. I want gradual change because I don’t want to risk this wonderful life I have for an unknown. But when I write for Counter-Currents, or when I wargame apocalyptic scenarios with my red-pilled friends late at night, or when I push push push my mind for ideas and inspiration to help this cause of ours, my Monarchal urge dominates — because we really can’t afford to wait any longer. We need change now.

But only after I kiss my daughter good night. You never know when it’s going to be the last time.

» The Problem with Memphis