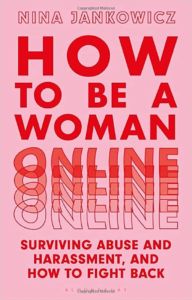 Nina Jankowicz
How to Be a Woman Online: Surviving Abuse & Harassment, & How to Fight Back
New York: Bloomsbury Academic, 2022

Womanhood is under threat. The effects of this society-wide attack on girls can be seen in young ladies “transitioning,” being encouraged to serve in the military, and vicious online attacks on women by trolls. One such woman attacked by trolls online is Nina Jankowicz. Jankowicz is an expert on Internet disinformation, with a focus on Russian aggression in Eastern Europe.

Recently Jankowicz was appointed “Disinformation Czar” in the Biden regime. The appointment went badly. The Republicans immediately recognized that a Disinformation Czar would soon be used against them. All of that is true, but disinformation is actually a real thing. Foreign governments — Israel, Saudi Arabia, Russia, and China among them — routinely work to misinform the American public. It is certain that the Israeli government worked with Jewish lobbyists, neoconservative ex-Trotskyites, and the George W. Bush administration to spread disinformation on Iraq’s “weapons of mass destruction” to get Americans into a war to further Israeli interests.

I personally found Jankowicz’s ideas about disinformation very compelling. As a white advocate, I wish to spread the word about the bright possibility of a future American white ethnostate. To be successful, I must be on the side of truth. I cannot defend a position that can be proven wrong. I’m even careful about advocating for or against a thing — such as a new medical advance — when I don’t know what to believe.

Nonetheless, Jankowicz is a woman activist. Although she is an Establishment Democrat, her problems are not unlike those of other female activists for other causes, such as Anita Bryant. Jankowicz is being attacked for her womanhood more than for her ideas, good or bad. Jankowicz’s insights into dealing with these attacks are important for our own women activists to follow.

There is a known way to avoid online harassment: Don’t have a social media account where one can interact with the entire suite of users. One can be an activist with a website where comments are carefully weeded out, and a random reader can only contact the people behind it through a contact form.

Nina Jankowicz did none of that. By her own account, she adopted Facebook early and started to blog immediately. As she increased in prominence, she started to gain followers. Some of those followers were odd, with a one-sided relationship with her.

Jankowicz offers this very important, but basic, advice to others to protect themselves from problems online:

Other online best practices include:

Don’t post photos of your location in real time.

Don’t post photos of your pets in which their identity tags containing your phone number are visible.

Don’t get taken in by people on dating sites.

The attention women get

Jankowicz is frequently on television, usually discussing disinformation about Eastern Europe. Once she makes an appearance, a great many men then start following her on her social media accounts. These followers are the male version of groupies.

From Jankowicz’s perspective, they come in several groups. There are men seeking a response from an attractive young woman such as her; there is usually something sexual about their interest. Then there are messages seeking basic information about her, despite the fact that people could discover this through their own research. There are also older men who write in ALL CAPS. This is apparently common enough to rate a category.

Jankowicz keeps her direct messaging functions open so that she can receive important leads and engage with people in her field, but that means she is also subject to dick pics, abusive private messages, and other outrages.

There are some methods she has learned to protect herself, however. First, block trolls. Second, mute your social media account. You will still be connected to your followers, but you won’t receive notifications about their posts or messages. Jankowicz also argues that one should always read the Terms of Service (ToS) of the various social media sites. It could be possible that an abusive troll is violating the ToS and can therefore be removed. And lastly, threats of violence should be taken seriously.

If you think you may need to contact the police about someone who is communicating with you online, save every threating message. Also remember that although you might delete messages, the other party can save them. It is possible to delete messages or entire conversations on some messaging apps, but they can still be preserved by the person at the other end with screenshots. Thus, there isn’t any surefire way to entirely delete a tweet. And always be careful with what you say online, since offhand statements can get you fired. The firing may be unjust, but you’ll still be out of a job.

Jankowicz argues that women should seek out other ladies in their field to gain support and encouragement. These circles can likewise be places where good ideas can be exchanged.

How to be a Woman Online is a quick read. It offers outstanding advice for female activists of all stripes. The Internet is a two-edged sword: It can bring a person fame, it can illuminate important truths, it can allow one to connect with a large network, but at the same time, one is entering a battlefield. Be careful online.

« Counter-Currents Radio Podcast No. 462 The Best Month Ever on The Writers’ Bloc with Cyan Quinn

» In Memoriam: Frances A. Yates’ The Art of Memory