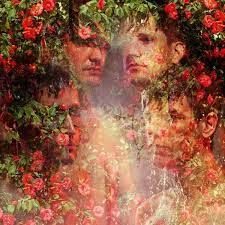 STRFKR, short for “Starfucker,” is a Portland-based indie/electronica band. Their lead singer is a cross-dresser, but during performances they have an astronaut crowd surf in an inflatable raft, which is pretty cool, so you have to take the good with the bad.

“Golden Light” is their most popular single. Unlike the typical upbeat, jejune songs which emerge in each generation’s popular music style, it has staying power. The harmonies are excellent and the emotions it evokes are complex. It seems to combine a blasé gloominess with a tinny-hued coziness — and somehow, it works.

YouTuber David Dean Burkhart synced the music with footage from an early 1970s American beauty contest. Unsurprisingly, virtually all the contestants in it are white. Combining gloomy music with footage of pretty white women may seem like an attack on whiteness, but I see it as more of an elegy for traditional all-white societies, which have now decayed into multiracial consumerist dystopias.

Many of the things the contestants are doing in the video, like performing synchronized dances while holding what appear to be adorned hula hoops, seem too stuffy and quaint for modern times. It’s very different from the jumpy, urban dance styles popular in recent times such as twerking, krump dancing, and the Jackson Mahomes style of methodical limb-flailing popular on TikTok.

The way the contestants cry and embrace each other after hearing the winner seems like something one would only see in a racially homogeneous white society. In modern mixed-race beauty pageants, the winner still cries, but at most one person hugs her, and it’s more of a hollow-chested pat on the back than a fervent embrace.

In all of their behaviors and movements, the Golden Light women are unabashedly feminine. It’s funny because feminism isn’t about femininity; it is hypergamy without men. In other words, it is status-seeking with Prince Charming out of the equation.

The main way to achieve status is to secure a high income, so feminists clamor for a 50/50 gender balance in high-paying jobs via class action lawsuits and equal opportunity regulations. They even seem to advocate tearing down ordinary gender distinctions as a way of eliminating the advantages men have. They therefore advocate cultural androgyny, claiming that children should not be assigned a gender at birth — and if they’re not advocating androgyny, they engage in sexual contrarianism in the form of transgenderism, or simply manliness for women. The famous feminist Gloria Steinem presented Miss Piggy, a comically domineering puppet, with an award on behalf of the Sackler Center for Feminist Art. I realize that perhaps the “alpha” females of this world will always be a little bumptious and cold-hearted like Miss Piggy, but we ought to do more to extol the virtues of ordinary women: humility, generosity, mercy, and altruism. We need femininity-ism and not feminism.

In 2019 I saved some comments from the Golden Light video that were coming from a Dissident Right perspective. The reactions could be broken down as follows:

9 wrote that traditional culture/Western civilization is being destroyed.

4 wrote that white culture is being destroyed.

4 wrote that the social fabric is faltering in an environment of vast wealth.

3 wrote that whites need to take back Western civilization.

3 wrote that the Left has ruined beauty standards for women.

3 wrote that whites are the best race.

3 wrote that the Jews are orchestrating white genocide.

The truth is, we in the United States have lost our sense of community and the value of the nuclear family. That’s what creates stable, loving individuals who are non-narcissistic and have a capacity for empathy. Money has destroyed this. You’re a nobody if you’re not a millionaire or don’t have a million [online] followers these days, and that is a sickness.

The commenter implies that people are more narcissistic today than they were when the film was made. Although some studies claim that there has been no rise in narcissism, others show the opposite. The decay of stable nuclear families would seem to lead to more narcissism because divorced parents have more of an incentive to compete with each other to become the child’s favorite than married parents, and custody battles exacerbate this problem.

The commenter quoted above also mentions that too many people worship money these days. Whites have always revered the high-status members of their society. In the medieval period, royalty were even considered semi-divine. With the coming of the Internet, though, this wealth is now more visible than ever. For example, we are no longer limited to knowing about the best cars among our circle of friends, or those we see in commercials on television. We can now watch videos of supercars worth more than the average home. Wealth inequality destabilizes society, but what’s even worse is when fathers earn twice what their sons do — which is now often the case — because women wrongly believe that their male suitors in their own age group are of a lower status than their fathers.

Another problem with modern materialism is how markets pervade nearly every aspect of our lives. Markets don’t just expand laterally to different countries, such as how they’ve spreading to Asia, but they also spread vertically within a society and snuff out cultural behaviors and institutions not traditionally motivated by profit. Churches and other non-profit organizations are closing. All social activities are now centered on economic transactions. Maybe this is what we get for outsourcing production and switching to a service economy. The sort of appeals needed to get money out of people in the service sector seems to be overtaking everything else, including the white race’s very existence.

Even more troublingly, the service sector seems to favor individuals who are low on the honesty/humility dimension of the HEXACO personality scale — meaning that disingenuous narcissists tend to be most successful in it. These “service sectoroids” are benefiting from turning society into nothing more than a flattery contest, and away from honesty. In the modern West, they have shifted society toward political correctness and away from truth. This has led whites to devalue themselves and overvalue non-whites. To quote “Golden Light”:

If you don’t know what you’re made of, you’ll think you’re the same as a non-white and fade into nothing as they genetically absorb you. But if you do, you’ll be aware that you’re different, and you’ll ensure your race’s survival.

Com Truise is an electronic musician whose style is classified by Wikipedia as synthwave, but in fact it is almost something unique, because it relies less on ambient sound and more on quick, textured synth sounds and beats. It’s almost like hard, inventive elevator music. One of his most popular pieces, “Propagation,” has an accompanying music video which was not a YouTuber’s creation but rather an officially approved project:

The video’s plot seems to involve a man whose robotic housewife has somehow becomes conscious of her existence. In avant-garde fashion, she reproduces by multiplying asexually, drowns her human husband, and then sleeps with an illuminated mask, which perhaps symbolizes another robot; she thus replaces her human husband/owner with a fellow electronic partner.

I interpret the video as being symbolic of women rejecting normal relations with men and opting for asexual reproduction in the form of multiple online social media profiles, which they use to get attention and which please them more than a run-of-the-mill working husband could. This seems to be what the video artist was tapping into on some intuitive level, at any rate. It’s fitting, since social media use is the worst detriment to getting young people together in natural social situations. It transforms the self into a product to be generated and consumed entirely electronically. The sort of social competence we see in the “Golden Light” video is thus completely neutralized.

Consumerism in the future may entail everyone having sensational digital lives amid squalid real-life surroundings. Such surroundings can be found in the video of Forest Swords’ most famous song, “Crow,” which features a futuristic apartment building displaying odd air conditioner-like devices and graffiti in a future language. The building’s futuristic yet drab appearance suggests a kind of dystopian consumerism where we all huddle inside small functionalist apartments, hooked into virtual reality or some other sort of cyber-fantasy as the real world around us is taken over by an exotic — perhaps non-white — people who have taken our place. “Crow”’s cyber-flute sounds makes one feel as though he is on a mission in a sort of Middle Eastern dystopia — which is close to what the capital city of the Forest Swords’ home country, London, is becoming. The video almost suggests that the future will be alien and non-white. This is even more explicit in their song “Arms Out,” which depicts an old white man seeming to pass the torch to a young man of mixed-race origin. The feeling one has from “Arms Out”’s tune is tragic altruism, which fits its video.

The instinct to be a good person doesn’t benefit whites when Jews and traitors among our people are controlling everything from the top. Intelligence can be evil if directed toward evil ends, and in a market economy, the ends get lost amidst the masses of people — and evil people’s profits become the only ends.

So many whites seem to be unable to reflect on anything anymore; they’re too busy running the rat race (as well as the to find a mate) to see that the game is unsustainable.

Maybe what whites need to do is to stop being good people on a small scale to prevent their good instincts from being exploited by the evil ones at the top. They need to hunker down, live with less, and starve the beasts who are destroying them. What’s more, they need to stop competing with each other so hard — because they’re all losing.

» Counter-Currents Radio Podcast No. 461 Ask Me Anything with Greg Johnson