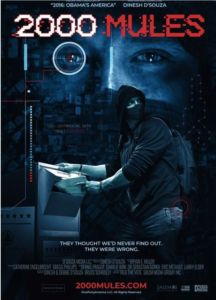 One question I ask myself when considering whether a conspiracy theory is true is how many coincidences the supposed conspiracy eliminates. The more coincidences, the more believable the theory. On the day after the 2020 Presidential Election, even without looking at any evidence, I already understood that an extensive fraud operation (i.e., a conspiracy) had taken place, one that was attempting to shift the tallies in favor of Joe Biden. Why? Too many unlikely coincidences. Count ‘em:

These four coincidence are enough to make the election results highly suspect, but the fact that they occurred only in the battleground states Biden was losing and needed to win should convince anyone that a conspiracy was afoot. If these were all natural coincidences, then why didn’t something similar occur in non-competitive states such as Massachusetts, New Jersey, or California? Seriously, anyone who wishes to convince when claiming that the 2020 presidential was fair and clean needs to answer this question. And since no one can possibly do this, the conspiracy theory will always be more persuasive to me than the alternative.

But this is a far cry from proof. What makes Dinesh D’Souza’s recent documentary 2000 Mules so crucial to our understanding of the recent past is that it attempts to prove, as if in a court of law, that systematic fraud (i.e., a conspiracy) did indeed give Joe Biden the election in 2020.

It does this by revealing information that Catherine Engelbrecht’s True the Vote organization compiled under the direction of election intelligence expert Gregg Phillips. They started out by hypothesizing that trafficking in absentee ballots would not only be the easiest way to cheat, but also the easiest method of cheating for them to trace. After all, this has been done many times in the past, and in all cases it involves a partisan non-profit organization providing ballots to a mule, which is a term borrowed from drug or human trafficking describing the person who carries out the actual trafficking. The mule then delivers the ballots to voting drop boxes in exchange for cash from the non-profits.

To cover the 2020 election, Phillips and Engelbrecht purchased a tremendous amount of geo-tracking data in key areas of battleground states that use cell phone signals to track a user’s latitude, longitude, elevation, and the time of each emission from the user’s phone. They then sifted through this data until they could identify individuals (i.e., mules) who met their high bar for being actors in perpetrating election fraud. They defined a mule as a person who visited ten or more voting drop boxes and five or more non-profit organizations during the month leading up to the election.

You can guess how many mules they found in all. Breaking it down: 200+ in Arizona, 100 in Wisconsin, 500+ in Michigan, 1,100 in Pennsylvania, and 250 in Georgia. Many of these visits occurred in the wee hours of the morning, and within several hours of each other. They could electronically track an individual as he went from drop box to drop box, town to town, county to county, all on a single day. One person visited 27 drop boxes in six counties in one evening. On average, the 2,000 mules visited 38 drop boxes in the time leading up to the election, delivering anywhere from three to ten ballots per visit. This amounts to an estimated 380,000 fraudulent votes.

To ensure that this data was sound, Engelbrecht had the brilliant idea of using it to solve a cold case murder in Georgia. A nine-year-old black girl had been murdered by unknown persons in a drive-by shooting, yet, through geo-tracking, she and Phillips were able to pinpoint the only two people who were in the vicinity when she died. This resulted in the arrest of two black thugs. They also cross-examined their data with similar data collected on violent protests and discovered that dozens of their mules in Georgia had also taken part in violent Black Lives Matter and antifa riots the previous summer.

Phillips and Engelbrecht then obtained about four million minutes of drop box surveillance footage to corroborate their electronic data, and lo and behold, we have our evidence. The rest is simple math:

According to this data, the Electoral College’s swing, after factoring in fraud, amounts to 47 votes — enough to change the electoral count from 306-232 in favor of Joe Biden to 279-259 in favor of Donald Trump.

Case closed? Maybe. But writer/director D’Souza reminds us that this data was compiled using a rather high bar for what constitutes a mule. “No one thinks that our 2,000 mules were the only mules trafficking illegal votes,” he tells us. What if the bar were lowered a bit? What if we cast a wider net, so to speak? After lowering their mule standards to ten or more drop box visits to five or more, Phillips and Engelbrecht discovered that this revealed 54,000 mules who had trafficked illegal votes in these key areas of battleground states alone! And after raising their algorithmic standards by estimating only three ballots — the minimum — being delivered per visit instead of five, the team estimated that over 810,000 illegal votes had been trafficked during the 2020 presidential election.

After making his case, D’Souza then presents his findings to his conservative pundit friends in the Salem Media Group: Larry Elder, Sebastian Gorka, Charlie Kirk, Eric Mataxas, and Dennis Prager. Here D’Souza lets the cameras roll as the men, rather entertainingly, discuss the details of Phillips’ and Engelbrecht’s findings and argue with one another about the validity of D’Souza’s claims. It should come as no surprise that, however skeptical they were going in, all five were fully onboard with D’Souza coming out.

D’Souza could have ended his documentary here, but didn’t. With some deft exposition and several whistleblower interviews, he shares with us how these non-profit agencies obtained so many illegal ballots. (In Arizona, according to one whistleblower, this had everything to do with what she called “the Mexican Mafia,” which preys upon uneducated and often elderly Hispanics.) He then investigates where these organizations got their funding.

And here’s where things get interesting, and bring us back to my coincidence criterion above. Although many sources of funding are listed in the documentary, three men are listed by name: Mark Zuckerberg, George Soros, and Warren Buffet. In particular, Zuckerberg donated around $470 million. An organization called The Voter Registration Project donated another $120 million. Their basic goal, in the words of the Capital Research Center’s Scott Walker, was “increasing in the eight target states over two million voters who are overwhelmingly expected to vote for the Democratic Party.” One very large string attached to all this money was the installation of lots and lots of voter drop boxes.

What a coincidence. Or not. According to my criterion, probably not.

2000 Mules is a slick, well-made, and convincing documentary. D’Souza, as we all know, is well-spoken, and his to-the-point narration serves his purpose well. Overall, this documentary is a useful thing, despite Ann Coulter’s superficial analysis of it.

To see how good 2000 Mules is, we must first consider its intended audience. If you’re as jaded about Blumpft as Coulter is, then the documentary is probably not for you. The same goes if you’re frustrated by how D’Souza and his pundit friends naïvely reject all racial identity for a much flimsier American or conservative identity. If civil liberties are a major thing for you, then the way Engelbrecht and Phillips obtained geo-tracking information on huge numbers of unsuspecting individuals would probably concern you more than the stolen election. And if you’re a dissident who knows damn well that the 2020 election was stolen and still holds a grudge over D’Souza’s shabby treatment of Sam Francis in the early 1990s, then you should probably avoid this one as well.

But if you’re a principled, mainstream conservative who’s willing to give Joe Biden the benefit of the doubt because proof of fraud doesn’t meet a certain standard, then 2000 Mules is, as Charlie Kirk proclaims, an Overton window moment. If the film reaches this audience, then it will shift it to the right. Kirk, Prager, and the others have a lot of pull with such people. In the face of all of D’Souza’s evidence, there is no other direction in which they could go.

D’Souza’s case in the documentary isn’t airtight — and I’m presuming he didn’t reveal the identities of individual mules or non-profit organizations for legal reasons (and will do so for law enforcement if called upon; a big if, I know). We should understand that the value of 2000 Mules is more metapolitical than political, however. Its point is not necessarily to overturn the election or send people to jail, but to cement in the minds of millions who don’t already acknowledge it that the Democrats’ elites and their nefarious far-Left donors are essentially oppressors and criminals. Because of this D’Souza deserves credit for producing a full-length documentary on one of the most important issues of our time — and he did so by relying on evidence, not coincidence.