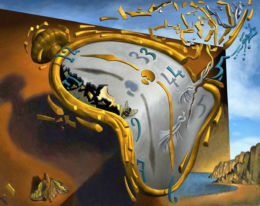 Author’s Note: In a recent livestream, Mary Ann asked, “Did you have a midlife crisis? What did you learn?” Hyacinth Bouquet transcribed my answer, and I cleaned it up a bit. I want to thank Mary Ann for her question and Hyacinth for her help.

I think this is a polite way of asking me if I’m over the hill. Yes, I’m definitely over the hill. I have more life behind me than I do ahead of me, based on any reasonable actuarial tables that one can consult.

The question, though, is: Did I have a crisis about this? What is a midlife crisis, anyway? As I understand a midlife crisis, it basically happens when you realize you’ve got more time behind you than you do ahead of you, and you start panicking.

We all know the midlife crisis clichés: the guy getting a convertible and trying to appeal to younger women, things like that. Basically, they take the form of grasping after one’s departing youth. Of course, this is a staple of jokes, because it is a joke. It’s undignified to run after something that’s gone, to resist the inevitable.

The only thing you can do about the passage of time is deal with it in a dignified fashion. That’s what I advise people: just recognize that, yes, life will go on — and you will die, eventually. You’re going to have to come to grips with the fact that you’re going to die.

I did not have a midlife crisis, per se. Around middle age, it never hit me all at once that I’m going to die. I have been constantly aware of my own mortality throughout my entire adult life. Indeed, I started thinking about mortality when I was a teenager.

That’s a bit morbid, I admit. But it makes you a little more serious. When you are young, you live as if you are immortal. Young people tend to think “Yeah, I’ll die someday.” But they picture death as out there in the future, in the distance waiting for them to catch up to it . . . some time.

You’ve only got one death, it’s off in the future, which means that now you can act as if you are immortal. Usually, that means: acting silly. But that is a fundamentally false understanding of mortality.

When the midlife crisis hits, it usually comes in the form of realizing that the death you picture as out there in the future is closer. You’re catching up to it. You’re halfway there! So you get a chill.

But that chill is nothing compared with the chill of facing up to the fact that at any moment you can die. Your death is not something that’s out there in the future, waiting for you at some fixed time — fixed by God or destiny, or whatever. You can die at any moment. You can die in this moment. And you always could.

I never had a midlife crisis because starting in my teens I was acutely aware that I could die at any moment. My midlife crisis began then. It has been a permanent crisis, if you will. I have always been standing at the crossroads of life and death. But that’s simply the truth about us all. We are all always already standing at that crossroads. But most of us just don’t consciously realize it until midlife.

I am glad, however, that I got a head start on my midlife crisis. Many people come to regard their midlife crises as good things because it forces them to take the life that remains more seriously. But the sooner you do that, the better. As soon as death began to haunt me, I became more serious about life and tried to make the most of it.

As I’ve grown older, there has not been a big crisis, but there have been changes. As it becomes clearer that I have less and less time ahead, I am more willing to let small things slide. I am more impatient with petty things and petty people. I have enormous ambitions, limited time, and that means I’ve just got to be serious about how I conduct myself.

Another thing that happens as you grow older is you start thinking about the impact that you’re going to have, because you’re not the center of the universe. I’m not the center of the universe. Egoism is an absurd way of looking at things. Why? Because you die. If the only thing that you live for is transient satisfaction of your mortal self, then your life doesn’t amount to much in terms of meaning. I would like to have a life that’s significant in the sense that I make a positive impact on the world, long after I am gone.

One of the worst things about growing older is that you inevitably accumulate more occasions for sorrow and bitterness, and the process speeds up when you hit midlife. You’ll meet terrible people; you’ll be the victim of injustices; you’ll lose people and things that you love; you’ll do things that you regret; you’ll need forgiveness, from yourself and others.

Most of this is inevitable, but not all of it is. You can do fewer foolish things, fewer things that you will regret, fewer things that will poison your later years with bitterness. The biggest thing standing in your way, though, is modern liberalism, specifically the attitude that we should all be free to “make our own mistakes.” Progress in science and technology is based on the fact that each new generation does not have to reinvent the wheel and calculus for itself. But when it comes to wisdom about how to lead our lives, modern liberalism tells us that each generation has to reinvent the good life, rather than learn from the experience of others embodied in tradition.