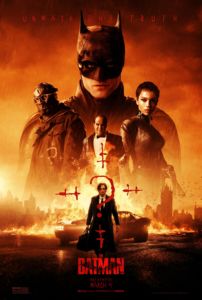 Introduction to The Batman

The new Gotham city, presented by director Matt Reeves and inhabited/stalked by Robert Pattinson’s Bruce Wayne, is gothic and atmospheric. On the first of two viewings, I found myself so enamored by the backgrounds and music that I was less focused on the dialogue. Gotham is not merely a backdrop to the events taking place but is brought to life and is almost a character in its own right. Bruce Wayne’s “Batcave” is an abandoned subway station beneath Wayne Tower, which also houses his gothic-styled manor.

Dystopian yet beautiful, Gotham City comes into its own. There is a scene where Bruce is riding his motorcycle through a “Times Square”-styled part of the city featuring a curved road not found in Midtown Manhattan’s actual grid. Bruce leans into the corner with a bit of countersteering, revving as the bike straightens out. It’s a new touchstone in film cityscapes.

Penguin’s club on the docks, Gotham Square, and even the Corner Diner all come to life more authentically than I’ve seen them before. Cities very much have a personality and feel to them, and you can feel Gotham in The Batman.

If you’re familiar with the 1995 film Se7en, you might notice some similarities. Everything was darker in The Batman, visually and thematically. Elements of horror films are used in the early scenes, where a set of eyes appears from the shadows to Waterphone sound effects in the old orphanage.

Let’s talk racialism in The Batman. The first scene that I noticed in which race is an issue in Gotham is when a gang is shown riding the subway, wearing face paint, while a new member is undergoing an initiation. Only half of his face is painted in the gang’s Halloween-styled makeup. They terrorize Gotham by finding victims and playing “the knockout game” with them while filming it, and then uploading the video to the Internet. I immediately noticed something you would only see in Hollywood: the gang is mixed-race. It includes whites and blacks, as well as what looked to be a mixed-race teenager as the one being initiated. The symbolism here could be any number of things. The group’s youngest member being mixed-race could signify a new racial direction for Gotham’s youth. “Diversity” is finally being achieved in human form, not belonging to any particular group but to a new one entirely. An Asian man is the would-be victim of the gang’s knockout game.

Gotham City Police Department is racially integrated, as are most police forces in big cities in real life. A young detective, Martinez, is a very light-skinned, affable character — one of the good guys. Detective Jim Gordon, a longtime staple in the Batman franchise, is here played by a black actor, Jeffrey Wright, the first time the role has gone to a black man in a live-action production. The other notable casting choice is Zoe Kravitz’s Catwoman. Michelle Pfeiffer, Halle Berry, and Anne Hathaway all played the character on film before Kravitz.

The choice to diversify the cast was carried out oddly. This is because both Wright’s Jim Gordon and Kravitz’s Catwoman were exceedingly white-presenting. These are two characters with deep roots in the world of Batman. Wright’s voice in the film was reminiscent of that of Gordon in Batman: The Animated Series from the mid-1990s, which I enjoyed immensely as a kid. This Gordon felt familiar. His demeanor, tone, mannerisms, vocabulary, temperament, and everything else came across as very white. Similarly, Catwoman, from her choice of clothing and style to the motorcycle she rode to her sense of loyalty and justice to the way she presented herself, never once seemed like a person of mixed Jewish and black ancestry. Even her habit of adopting stray cats felt almost stereotypically white.

This way of presenting the characters is both good and bad. It’s good because I could watch the nearly three-hour movie in which Gordon and Catwoman have significant screen time without feeling like diversity was being pushed on me. But it’s bad for the same reason. The subtlety of replacing historically white characters with non-whites was so soft that it managed to avoid offending even me, somebody who is hypersensitive to such deliberate casting choices. My fear is that the “normal” audience will see this very seamless transition onscreen as an indication that transferring to a less-white society will be equally well-ordered in the real world.

There was a line about “white privilege” during a dialogue between Batman and Catwoman; a single line in an almost three-hour film. It felt hamfisted and out of place. Nowhere in Gotham is “white privilege” on display. An entirely black-presenting character, Bella Reàl, wins the mayoral race at one point. This is perhaps not an indication of pervasive white privilege in Gotham but a sign that a new regime is rising, similar to the scene of the gang member being initiated. I believe the symbolism was deliberate and connected.

Catwoman complains to Batman that the city is run by “white privileged assholes” who face no accountability. She states this after correctly assuming that Batman “grew up rich.” The line is so odd and out of place that it nearly feels like the fourth wall is being broken, as if Kravitz had turned to the camera mid-scene, stopped, dropped character, and said, “Oh, did you think you could go see a movie and escape anti-white politics? For three whole hours? I don’t think so.” It’s almost as if there is some Hollywood checklist that must be completed before a production can be finalized and distributed.

The major players in the city’s corruption and drug underworld are all white, as presented in the film. Falcone, Maroni, District Attorney Colson, “the Penguin,” and Mayor Mitchell are among the key figures in Gotham’s crime network — all white men. Their victims are also primarily portrayed as whites, however. The disappearance of a young blonde cocktail waitress, Annika, who is Catwoman’s roommate, is the reason she ends up getting involved in the first place. The Riddler, the story’s primary antagonist, is also white and feels deeply wronged by the system of corruption at Gotham’s highest levels. The Riddler grew up an orphan in what is described as horrific conditions, later becoming a forensic accountant and eventually a vigilante/supervillain after witnessing being victimized by the corruption firsthand.

There is undoubtedly an element of class privilege present in Gotham. The notion that there are secret inner circles within the political world where one is beyond the reach of the justice system is one such indicator. Perhaps this film’s producers, and society as a whole, have deemed that concept an example of “white privilege,” but if that’s the case, it dramatically misses the mark. Besides which, beyond any class privilege that may exist, you still need to be an “insider” to enjoy such privilege. Bruce Wayne, despite his wealth, was never privy to the inner workings of the city’s network of corruption.

Themes of Fringe Movements and Justice

Throughout the film, The Riddler communicates with 500 social media followers who are described as “real fringe types.” His followers are also troubled with the conditions of corruption and decay permeating Gotham City, and like The Riddler, they want something to be done about it. They, of course, cheer The Riddler on as he goes about dismantling the criminal underworld and taking on corrupt police officers, all while revealing some of Gotham’s dark secrets.

As far as I could tell, Batman and The Riddler have the same goals. They want Gotham to be a friendly, safe, high-trust, and well-functioning city; a place people could be proud to call home rather than a haven for corruption where good people are victimized at every turn.

Batman himself is derided as a “freak” by some in law enforcement while seen as a welcome addition by others. This theme plays out in Nolan’s trilogy as well, as it does through the entire Batman canon. In The Dark Knight (2008) The Joker tells Batman, “You’re just a freak. Like me.” In this film, after meeting The Riddler and upon hearing how he sees Batman as a kindred spirit and fellow traveler, Batman is repulsed and calls him a freak.

Throughout Batman’s history, the idea that the line of justice is very blurry is a common one. This is evident in the dialectical nature of Batman and the villains he fights, given that the latter often have similar motives to his own and are sometimes interested in similar ends despite disagreeing on the proper way to arrive at the destination. Both Batman and The Riddler are so disgusted by the city’s corruption that they are willing to give up their lives in pursuit of a better Gotham. At the corrupt Mayor Mitchell’s funeral we even see a group of citizens gathering to support The Riddler’s activism. The film’s writers wants us to think they are lunatics with fringe views and want us to support Batman and Jim Gordon, but I struggled personally to see their internal rationale or consistency. There have to be more than simply vague appeals to the “justice process.” The very nature of Batman, a masked vigilante, is an example of the justice process is being shirked, with one man often acting as judge, jury, and hangman.

In all, the film is beautiful. The gothic architecture and styling are immersive. The split-window Corvette replacing Bale’s Bruce Wayne’s Lamborghini is a perfect fit for the start of a new, darker Batman film series. The music is sullen and well-placed.

Finally, Bruce Wayne’s monologues come from his daily journaling. It is a great touch, filled with several interesting insights relatable to people like us. We in the audience are privy to the reclusive thoughts of a billionaire orphan trying to fix the only city he has ever called home. Bruce is filled with doubt that anything he can do will matter. He has little faith that his efforts are anything other than in vain, yet he carries on night after night.

« Léon Bloy & the Symbolism of History