Septentrion A Novel by Jean Raspail, an Old Bloyian at Heart 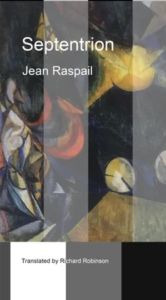 “There is nothing one can do against those who approach. Except run . . .” So begins, not Septentrion the novel, but Septentrion the blog page. It is with this quote — a quote by himself — that Jean Raspail begins his personal blog page dedicated to his own work, a novel from 1979, recently translated into English, for the first time, after nearly 45 years. That quote is quickly followed by this one: “Death is our deepest memory . . .”, from Ernst Jünger.

What to say about Septentrion the novel without giving away the story? One will have to speak in luminous abstractions, poetic bounds, quotes, and thick or thin riddles unless . . . Septentrion, coming out six years after the authorʼs more in/famous The Camp of the Saints, is a novel of great beauty and sadness taking place mostly in the past, in the north — but from the perspective of a future south –, in 2041. It is a ride through the forests and the frozen steppes of the Septentrion by 35 elitists, a microcosm of white society, in mad escape from the gray demos, on a train.

What follows, on the blog page, seems like another quote from the same novel, but itʼs not:[1]

Now, they are rolling to the north. They have left the city just in time, before that surreptitious approach from the south, which they were the only ones to perceive the nature of, that does not cover the city in its gray uniformity. Thirty-five random companions with the same instinct have gathered together on that yellow and gold train, superb relic of a glorious epoch in the history of Septentrion. Around Kandall, and the beautiful Clara de Hutte, and Jean Rudeau [the narrator of the story, and a foil for Jean Raspail himself], there are women, children, five dragoons, four hussars, two conductors, a rag- and-bone man, a bad priest, and others still. Thirty-five: men and women of refusal, the last free men.

They roll to the north, through the forests and the steppes. Through space and time that stretches away.

One day, they understand that they are being followed. Who is following them? And why? For how long will that star above them shine, which seems to protect them? Will they escape the anonymous multitude dressed in gray?

That sounds pretty good, and because one can never have too much of a good thing, letʼs see what follows, in the commentary section from that same blog page, wherein we will apparently find some literary influences:

There is, among the considerable body of novels by the — and very under-rated — contemporary master of the American school of horror and fantasy, the writer Stephen King, a longish story entitled “The Langoliers” [which was also made into a Hollywood movie, but we absolutely discourage you from watching it, unless you like b-movies from the past], which tells of the misadventure that happened to a handful of passengers on an airplane that inadvertently passes through a time rift, transporting them thus several instants into the past. The world they discover, when their plane finally lands in Bangor (Maine) — the writerʼs home town –, resembles, make no mistake about it, the ordinary world, with the exception that there is not a living creature to be found, neither human or animal; where sounds donʼt echo; where the food is devoid of any taste; and no smells waft through the air. A world of incredible blandness, in sum, frozen in time, in the expectation of the famous Langoliers, fabulous creatures, devourers of worlds, who, by incessant gnawing and whittling away, little by little push that remainder of a past life over the edge, into nothingness . . .

There is something similar to that in Septentrion by Jean Raspail. Beyond the absolutely fantasy-like character of the action, the world that is depicted in it evokes in part that described by King in his novella, with the Langoliers being replaced by a grey mass of men. Septentrion also evokes another classic of science-fiction literature, The Body Snatchers by Jack Finney, which tells how extraterrestrials, initially in the form of large pods, literally merge with human beingsʼ bodies so as to substitute for them, thus turning the closest of friends, husband and wife, children and their parents into strangers, from one day to the next.[2]

The comments are from one Philippe Hemse. For my own part, comparing the great late Jean Raspailʼs novel Septentrion to something by Stephen King — especially The Langoliers, the film version of which is atrociously bad, although I have to admit I stopped watching it, as I usually do with most movies, after about 30 minutes — is a bit of a wet blanket to me; to then compare Septentrion to yet another book, The Body Snatchers, a dystopian science fiction piece which I havenʼt read, but maybe will someday, which was also made into a movie which I havenʼt seen, and probably wonʼt — is more water, perhaps tepid this time. One may or may not accept the correlations. That Raspail would put the commentary on his own blogsite, however, seems to lend some credence to his accepting it. But who said one has to take the authorʼs word for it? I like to think they or he is pulling my leg. For Raspail, the self-proclaimed consul of Patagonia, was a practical jokester sometimes.

For me, the late and great Jean Raspail is pure gold: elitist, white, Catholic, erudite, visionary, and funny. Not to mention continuing in a (I wonʼt say long, but esteemed) line of conservative, traditionalist, monarchist, nationalistic French writers since, not last and certainly not least, the arch- Catholic and stercoraceously intransigent Léon Bloy, of Chat Noir fame and from the Belle Epoque.

With that cachet, he cannot do any wrong in my book, or anyone elseʼs, no matter how hard he might try or whatever joke heʼs trying to set up.

Septentrion, like The Body Snatchers, is dystopic. How could it be anything but dystopic, with a theme that is similar to, but more refined than, the authorʼs more famous novel, The Camp of the Saints, which was written six years earlier? But as Jean Rudeau, the narrator of Septentrion, says, more than once: “It seems to me that I have already said that . . .”

Of course, Septentrion is also not without echoes of The Camp of the Saints, published six years earlier and, from a strictly literary point of view, itʼs a greater success, Jean Raspail never being better than when heʼs telling a story pure and simple, and embarking us on an epic at the confines of what is both real and imaginary, while his evocations of the present are often dressed in a thinly-credible character, which approaches caricature, even if they really strive above all to be metaphorical — Iʼm thinking, for example, of the brief incursions of the present into the closed world, quasi out of time, of Ireneʼs eyes . . .[3]

“An angel passed over us, depositing smiles on our lips, and Éliane lowered her eyes.” “For several seconds, a kind of archangel had passed over us . . .” What could be more entertaining and elitist than a group of people, almost hand-selected, escaping the gray demos on a custom train . . . to the north, ever to the north, to and through the Septentrion? . . .

Now, the “present of the real world” is kept at a distance by the force of things, led back to the rank of symbol. One can follow Jean Raspail then unreservedly, into that mad escape between a yesterday in the process of dissolution and an improbable tomorrow . . . For there are no tomorrows that sing, for Jean Raspail. There have never   been and there never will be. There is only the voyage for the sake of the voyage; the moment of an intervening period of time, which, as we have already mentioned elsewhere (see Parcours), is the only true world of the writer, his veritable self. “There is nothing one can do against those who approach. Except run even farther away . . .” (Septentrion)

From that perspective, Septentrion is then also a novel about the writer himself — it is not by chance that the narrator of the novel, Jean Rudeau, has the same initials as Jean Raspail. A Jean Raspail who, after many years of wandering through the world, settled down and felt himself probably, at that precise moment, a bit cramped in the France of that time, as if he had reproduced in his life a reiteration of the situation that he had known at the beginning of the ‘50s, just before he embarked on his first voyage . . . Thus, as he was about to leave his home forever, to hoist the sails, to depart for the unknown, in the direction of the Septentrion, Jean Rudeau says this:

“I felt happy, light, young again. Delivered. Now, they could come. Me too, I had something to abandon to them, as one gets rid of an old, worn overcoat when better days come around. I left them my mediocrity, assured that they would take care of it and make it bear fruit.”[4]

If, with the The Camp of the Saints, Jean Raspail had more or less said his farewell to a world in which he no longer barely felt his place anymore, with Septentrion he turns the page radically (the expression shows up several times in his writing) in order to hit the road for somewhere else where he might hide from the vain “discussions of society”: myth. And doing so, he fully enters into literature, without any more compromise with the present epoch.[5]

Septentrion, in English translation, is a Sunny Lou Publishing book. More information can be found on the publisherʼs website.

[1] Unless it is, from the original novel of 1973. The translation into English of Septentrion is from the 2007 edition.

[2] Philippe Hemse, as quoted on Jean Raspailʼs blog page for the book Septentrion.

» Walter Duranty & the New York Times: “All the News That’s Fit to Print”