A Bit More of the Good Book: The Ethnonationalist Revenge 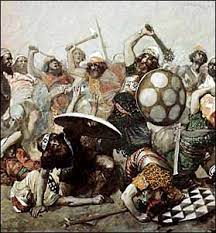 The Israelites genociding the Hittites at Jericho at their God’s command.

Morris van de Camp’s excellent essay “A Bit of the Good Book — From an Ethnonationalist Perspective” reminded me of something that I have always known about the Old Testament: It is a tribalist manifesto. Of course, it is more than just that. It’s part history, myth, fable, literature, prayer, law, and other things as well.

Thematically it is equally diverse. It’s truculent and cruel, as when Moses orders the sons of Levi to kill 3,000 of their own people after they worshipped the golden calf in his absence (Exodus 32:19-28), or when God instructs the sons of Israel to commit genocide against the Hittites and other groups (Deuteronomy 7:1-16). It’s edge-of-your-seat entertaining, as when the conflicted and ill-fated King Saul contends with the upstart David along with external threats from the Philistines and the Amalekites (1 Samuel 15-31).

It’s brimming with unforgettable detail, my favorite being the “shibboleth” story from Judges 12 in which Jephthah is warring with Ephraim. The former’s followers detect an Ephraimite through his inability to pronounce the word “shibboleth.” A close second also appears in the exquisitely violent Book of Judges, when a fleeing Canaanite commander named Sisera seeks shelter in the camp of the Kenites, an allied tribe. Jael, the wife of Heber, invites him into her tent, waits for him to fall asleep, and then drives a nail through his temple with a mallet (Judges 4: 17-22).

For prose literature, one would have to travel to Ancient Greece to find to find anything as imaginative, profound, and mesmerizing as the Book of Job. And as for poetry in the form of prayer, what can equal Psalm 23 (“The Lord is my Shepherd”) to help a person endure difficult times? Psalm 56 (“A Prayer of Trust”) comes close. And if one is lonely and far from home, one can do no better than the first six lines of Psalm 137 (“By the Rivers of Babylon”) to find comfort.

There is therefore a reason why the Old Testament resonates so powerfully across the miles and centuries. Of course, this might be due to the sublime English verse found in the King James Bible almost as much as it is to the inherent value of the source material. Can anyone in the West imagine what could encompass the meaning of the word “scripture” better than the Old Testament? For these reasons, it is a crucial document of world history and literature.

Yet, above all else, the Old Testament is — I repeat — a tribalist manifesto. At all times, the reader is aware of the distinct and strictly — often violently — enforced demarcations between Jews and non-Jews. Thus, the term “seed” appears often in the Pentateuch. Genetics and racial purity are of paramount important to the ancient Israelites. This is why the Book of Ruth is so noteworthy: It actually violates this racial purity by accepting the heathen Ruth into the Jewish bloodline which leads to King David. Note also Psalm 137, mentioned above. I included only lines 1-6 because lines 7-9 are quite a bit less, shall we say, psalm-like. They seek revenge against Israel’s enemies by calling for the mass murder of children (“Happy shall he be, that taketh and dasheth thy little ones against the stones.”)

Not so sublime, now, is it?

In Genesis 15:4-5 and 22:17, God informs Abraham that the number of his seed will amount to the stars in the sky. In Genesis 21:13, God promises Abraham that he will make a nation from his seed. In Genesis 25:23 God tells Isaac’s wife Rebekah that there are two separate and distinct nations in her womb. Genesis 35:11 has God instructing Jacob that he will offer the land of Israel to his seed. So, if you were not of Jacob’s seed, then you were not going to receive the bounty of the Lord, and no amount of good deeds and righteous acts was going to change that. This is not civic nationalism. This is blood and soil tribalism, which was extremely common if not ubiquitous in the ancient world.

Above, we mention how God instructs His children to commit genocide. Here’s the Lord in his own words (Deuteronomy 7:14-16):

Thou shalt be blessed above all people: there shall not be male or female barren among you, or among your cattle.

And the LORD will take away from thee all sickness, and will put none of the evil diseases of Egypt, which thou knowest, upon thee; but will lay them upon all them that hate thee.

And thou shalt consume all the people which the LORD thy God shall deliver thee; thine eye shall have no pity upon them: neither shalt thou serve their gods; for that will be a snare unto thee.

Now, to be fair to the ancient Israelites, I am sure that the holy doctrines of all the surrounding tribes in the Middle East back then had similar passages demonizing the outgroup. In its historical context, there may not be much that is unusual about the Old Testament in this regard. But still, it’s impossible not to read a distinct ethnocentrism in and between the lines of the Old Testament — one that will force many modern-day Christians of the “woke” and inclusive variety into the uncomfortable position of backpedaling. Deuteronomy 14:2 would be a typical triggering point:

For thou art an holy people unto the LORD thy God, and the LORD hath chosen thee to be a peculiar people unto himself, above all the nations that are now upon the earth.

Genealogy is also central to the Old Testament. Genesis’ fourth and fifth chapters provide exact lists of Adam and Eve’s descendants, which provides the stereotypical “who begat whom” business the Bible is famous for. Chapter 10 of Genesis provides 32 lines of Noah’s descendants, known as the “Table of Nations.” At the end of the Book of Ruth, Ruth’s child Obed’s lineage is provided, which stretches back to Pharez, the son of Judah — who in turn was the son of Isaac and the grandson of Abraham. A similar genealogy is provided for King Saul in 1 Samuel 9:1.

So, the idea of ethnocentric purity reverberates throughout the Old Testament, with the rare exceptions being explicitly stated (such as with Ruth as well as with Judah’s coupling with his daughter in-law, the Canaanite Tamar). Most of the time, however, God punishes Jews who venture among the gentiles, swiftly and mercilessly.

Of course, modern Christians will fall back on the notion that the New Testament, while complementing the Old, also presents God’s plan in greater focus and provides the means for salvation not found in the older document. In other words, the two books are interconnected, with the New Testament referencing the Old thousands of times, but the New Testament is the one you should follow if you want to get into Heaven. (Imagine a school shooter bringing up Psalm 137 as a justification during his confession: “Well, Father, the Psalm did say that those kids had it coming. Do you want me to not follow the word of God?”)

Anyway, Christians can resort to all sorts of syllogisms to dispel the throbbing ethnocentrism found in the cruel and authoritative Old Testament. And dispel they must if they wish their religions to be as ecumenical in deed as in word, because if there is anything the Old Testament isn’t, it’s ecumenical.

Unfortunately, this resolution opens a loophole which the globalist enemies of Christians — and of white people — are quick to exploit. It is the very ecumenical nature of the New Testament which provides the justification, or holy decree, behind the racial integration and mass immigration which is currently threatening the West’s white populations. If modern globalists look to the Bible for anything, it has to be for passages such as Paul’s famous claim in Colossians 3:11:

Where there is neither Greek nor Jew, circumcision nor uncircumcision, Barbarian, Scythian, bond nor free: but Christ is all and in all.

If we are all one in Christ our Lord, then white Christians should therefore do something as stupid and dysgenic as marrying their daughters into the families of those Guatemalans, Somalis, and Pakistanis who are moving in droves into their hometowns. White Christians need to be shaken out of this stupor and reminded of the openly ethnonationalist basis of their own religion — as vigorously depicted in the first 1,200 pages of their own Holy Book. Further, this resolution between Old and New testaments need not be so neat. In Acts of the Apostles 17:26, it clearly states that the Lord

hath made of one blood all nations of men for to dwell on all the face of the earth, and hath determined the times before appointed, and the bounds of their habitation.

Get that? God may love blacks as much as whites, but blacks have no business living alongside white people, since that would transgress “the bounds of their habitation.” So perhaps the New Testament does retain some of its predecessor’s ethnocentrism after all. Christians of all stripes would be well served to take heed of their scripture and take an ethnonationalist’s revenge against the globalists who have coopted their once-great religion.

One final note. While some Christians may feel the need to explain away the Old Testament’s bald tribalism, one group of people to this day does no such thing: the descendants of the Old Testament’s authors themselves. After applying all the appropriate NAXALT (not all x’s are like that) caveats — Laura Loomer, David Cole, I’m talking to you –, when I see Left-wing and extremely influential ethnocentric Jews like Jonathan Greenblatt of the Anti-Defamation League simultaneously promoting dysgenics in the West and eugenics in Israel, or Mark Potok of the Southern Poverty Law Center keeping track of the dwindling white majority in America while announcing that they wish to “destroy” the Right in America, or Larry Fink of BlackRock stating that he wants to force ordinary people to accept anti-white terrorism and degeneracy, what I see are Old Testament Jews wishing to bring Old Testament justice to those who they see as their enemies. And as the good book says, their eyes “shall have no pity.”

The Jews have not changed much at all in 3,000 years, have they? The ones who have the will to power may no longer wish to smash the heads of gentile children against rocks, but these days they seem perfectly content in brainwashing gentile children into hating themselves for their race, forcing them to integrate with hostile outgroup members, and injecting them with hormones until they don’t know who they are anymore.

These methods won’t work quite as fast, but they amount to basically the same thing.

« Counter-Currents Radio Podcast No. 431 Ask Me Anything with Greg Johnson

» Cause & Effect: The Closing of the Muslim Mind