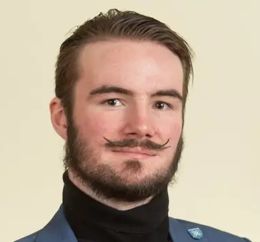 The following is a transcript prepared by Bryan Sawyer of Ruuben Kaalep’s speech at the Etnofutur VI conference in Tallinn, Estonia on February 23, 2022. It was written prior to Russia’s invasion of Ukraine on February 24. Mr. Kaalep is a politician with the Conservative People’s Party of Estonia (EKRE).

The world is breaking apart. All systems are collapsing. This is the time that ethnofuturists have always predicted. All systems will inevitably break down so that a new world can be reforged from its remains. This is the rhythm and dance of history. We are seeing the breaking down of the world power structure and the battle between empires and the formation of new alliances.

These days are crucial in the history of Europe, because the heart of Europe — Intermarium — is under attack from both sides, the east and the west. Russia’s attack against free Ukraine is a clear assault on European nations, even though many European nations do not understand this yet. We already see — and we will soon see even more — liberal Western leaders making back-room deals with Russia, exchanging the freedom of European nations for the preservation of the liberal democratic order.

What is a nation? A nation is always something more than a collection of citizens. A nation has a tradition unified by language, and that language is the only one capable of expressing that nation’s central myth. In every European nation and every European tradition, we find the myth of the World Tree, or the Tree of Life. A nation is like this primordial tree: It has roots in the soil and it has branches in the sky, and the deeper its roots go in history and tradition, the higher its branches can reach. Then it radiates strength, and that is called national self-consciousness.

You can really see the potential of a nation not in its manpower and the amount of its natural resources, but in the energy of its consciousness of itself that is extracted as a result of it honoring and understanding its roots. This is something that is still visible in Central and Eastern Europe and in the Baltic countries, and we don’t find much of it in a typical Western consumer society. This is why there is a huge identity crisis happening in the Western world. It can be quite a culture shock for an ordinary Eastern European conservative to encounter what they call “Western values,” and for an ordinary Western European liberal to encounter what we call “European values” here. In one part of Europe nationalism is healthy; it is necessary for a country and a people to sustain itself. It is what we are proud of. It is our duty and way of life. In another part of Europe, nationalism is evil, dangerous, and destroys countries. It brings only war, violence, and genocide.

When they talk about “Western values” and “European values,” what they mean are the dogmas of liberal democracy and abstract human rights which portray themselves as universal. And yet it is shaped by an immensely specific political and ideological context — the aftermath of the Second World War — stemming from a relatively small part of the world that did not see Soviet occupation and the reality of Left-wing totalitarianism. This is why we are now seeing this liberal, or social democratic, totalitarianism. Totalitarianism is a clear symptom of a system of ideas that is at the end of its life cycle. Only three years ago, we would not have imagined things such as mandatory vaccination in a free European country, or the massive censorship — both open censorship by the government or the more hidden, but extremely widespread, censorship by corporations, academia, and the mass media — that has effectively brought an end to free speech on many levels and destroyed what we thought of as Internet freedom.

Now, think about the Great Reset: “You will own nothing and you will be happy.” This is about the globalist project: the idea of one-world government, one-world market, and one global nation where life and death are mere commodities in global supermarkets. This is it. This is the idea.

What you need to obtain world power is to chop down the World Tree — that is, isolate the nations from their roots; sever their ownership of their ancestral land and take over the soil. Supranational institutions like the EU are like parasites feeding off the life energy of a nation. When a nation is isolated from its roots it is no longer capable of resistance, then begins the actual extinction process. The Great Reset comes together with the Great Replacement.

Liberals call this a “conspiracy theory” — despite the fact that it is obvious to everyone that in the great cities of Western Europe, native Europeans are already a minority. According to the pure demographic data, the French, Germans, Swedes, and Dutch will be a minority in their own countries by 2060 or 2070. This is due to the EU’s catastrophic immigration policies that they are forcing not only on their own countries but on every single Member State. This is one of the most crucial front lines in the struggle for the supremacy of national freedom, because this really is a matter of national survival in the most basic demographic sense.

The globalist project will certainly ultimately fail, however, because only other Europeans have ever taken it seriously. Other nations — other cultures and races in the world — will not agree to give up their identities, even if their elites are happy to exploit the global market for their economic or geopolitical goals. The very clear question is, can we as Europeans survive as a majority in our ancestral lands until the time the globalist project collapses? And can we avoid the obvious danger of the giant global catastrophe that this event will bring, with implications for geopolitics and the economy that will far eclipse even the COVID pandemic or the Russian war in Ukraine?

These are the stakes.

We nationalists really need to face this and be brave and contribute to the awakening of our peoples, the preservation of our history, and the advancement of our culture — and to teach these to our children. We need to help and protect this dream, and to maintain the continuity between ages, between our traditions, and between generations. The nation is all about continuity — about the link between our ancestors and our descendants, and our understanding that we really are this link between them.

And thus will this World Tree be regrown.

« Corsair, Our Word of Power