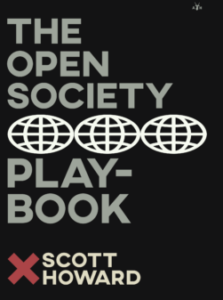 There should be no mystery about globalism after reading Scott Howard’s latest book, The Open Society Playbook. In it, Howard reveals an astonishing amount of research and insight into the nebulous forces which are currently dragging us into a bleak and uncertain future. And, of course, the most nebulous of the nebulous is George Soros and his aptly-named Open Society Foundations:

Since its inception, the Open Society Foundations have officially dispensed nearly $17 billion over tens of thousands of grants. But to what purpose? Is this charity and good works for their own sake? Of course not. George Soros admits in his 1997 piece for The Atlantic entitled “The Capitalist Threat” that the function of his foundation network active in countries under communism was designed to be “subversive,” and that, “For five or six years following the fall of the Berlin Wall, I devoted practically all of my energies to the transformation of the formerly Communist world.” He hasn’t stopped, and neither was this the beginning of his endeavors.

As with Howard’s previous work, The Transgender Industrial Complex, the goal of The Open Society Playbook is to reveal, reveal, reveal, and allow the reader to connect the dots and draw conclusions.

Chapter One gives us the overview of Soros’ Open Society Foundations from its origins in the former Eastern Bloc countries of the post-Soviet era. “Reform” was its rallying cry, but Howard reveals how these efforts of Soros were truly aimed at smashing nationalism. Slobodan Milošević and his Serbian government were among its first victims. From the very beginning, Soros was pushing for “openness” in the Balkans and fighting “xenophobia,” while spending hundreds of millions in creative ways to get it done. And, yes, this included, and includes, US taxpayer dollars. The Open Society’s Internal Migration Initiative is a great example of it.

Howard explores the complicity of the United States government, which has “less to do with anything pertaining to national security, and more to do with the advancement of ideologically-motivated business and financial interests . . .” Howard points to the United States’ State Department criticizing the anti-LGBTQ stances of numerous Eastern European nations as an example how the US is in lockstep with Soros’ Open Society. Leaked documents from Wikileaks reveal that this effort has been going on for decades. To demonstrate this, Howard offers a condensed history of globalism, starting from the days when Woodrow Wilson became the first American president to abandon the isolationism which had characterized the US since George Washington’s first administration in the 1790s.

One of the most valuable aspects of The Open Society Playbook is how Howard names names. And quite often these names are Jewish — a fact he never ceases to point out. In fact, this is something he quotes George Soros joking about in Chapter Three. In referring to the Open Society’s efforts to wrest Armenia from Russia’s axis through an infusion of neoliberalism and money — lots and lots of money — Howard writes:

The Establishment at large began pouring much more money and external support into Armenia beginning in the mid-2000s, surely as a response to a resurgent Russia that was breaking away from its “Wild West” heyday that had proven so lucrative to global capital and its disproportionately-Jewish oligarchs. George Soros was quoted in the 1990s as saying about his foundation functionaries in Russia, “I invited people, took them on the trip, and it turned out that they were all too old and too Jewish!” He chuckled. “And not acceptable. I mean, you can’t be that Jewish in Russia. So I told them, ‘You can’t have more than one-third Jews on the board.’”

Chapter Four, “Demographic Warfare,” might be the most difficult to read in the entire book. This is not because of a lack of quality, but because the chapter is simply devastating. Basically, Howard reveals exactly how determined Western elites are to make their civilization commit suicide. In 2018, the United Nations created its Global Compact for Safe, Orderly, and Regular Migration, which effectively states that migration is a human right. All nations that are not on board with resettling migrants will simply not receive the vast amounts of money available to more complaint nations. For example, the Asylum, Migration, and Integration Fund dedicated 6.6 billion euros from 2014 to 2020 for pro-migrant causes throughout Europe. Howard provides a table which reveals how much money European nations have taken in from the European Migration Network since 2014. These and other pro-migrant funds have offered staggering amounts of money to promote the rights of migrants to enter European nations and disrupt their societies. It’s no wonder they have been so successful thus far.

Ironically, the perpetrators of these crimes believe that they’re being pro-democratic, but Howard demonstrates that they are anything but:

Despite the ceaseless shrieking for “democracy,” Florian Bieber for Foreign Policy dismisses “the will of the people” as a “trope,” once again showing that democracy only works insofar as it aligns with the agenda of the ruling class. Should a majority — a vast majority in most cases — of the native population of a nation object to the importation of large numbers of aliens in whatever guise — migrant worker, “refugee,” immigrant — this is “xenophobic,” “racist,” et cetera, though of course these kinds of things are never put to vote, they’re just done.

Howard also tackles the concept of the “Zionist-Occupied Government” in a chapter by that name. He makes it abundantly clear that Jewish influence goes far beyond maintaining the anti-liberal State of Israel. Jews, he states, are the prime movers and funders of the globalist, neoliberal order. The pressure that Jewish lobbying groups place on Western governments and leaders is as intense as it is relentless. Of course, Americans know about AIPAC, but there are also the European Friends of Israel (EFI), Europe Israel Public Affairs (EIPA), and Horizon 2020, which financially incentivize migration to Western nations.

But it is not just about money. Howard demonstrates how the United States and Israel have subverted Western regimes through their backing of Islamist or even jihadist forces, from Libya to Bosnia to Afghanistan to perhaps even Chechnya. Howard also documents the well-known phenomenon of Jews leveraging Islamic attacks in European states to increase sympathy for Jews and for Israel, despite the culpability of both regarding the Islamic presence in the West in the first place:

Though Europeans are right to feel appalled that this could be happening in their countries, they must realize that it is being allowed and enabled to happen in their countries (and in the countries of their Western cousins). As regards Jews specifically, both in the West and from propaganda coming from or about Israel, Muslim attacks feed into the whole “anti-jihad” movement, which has been useful for many Jews to misdirect the natural objections to invasion and culture clash from the cause to a symptom, and to marshal support for Israel. Highly questionable characters such as Ezra Levant have made a career out of this.

This subterfuge also extends to the drug trade. In the final chapter, Howard treats us to the shocking extent to which Jews — both Israeli and diaspora — participate in organized crime across the globe. Often the criminals themselves are labeled as “Russian” in the news media, or their Jewishness is entirely concealed. Sometimes, however, they cannot avoid it, such as when police raided the offices and apartment of the Vice President of the Central Council of Jews in Germany looking for smuggled narcotics. Orthodox Jews and the Hasidim get in on the action as well, either selling drugs like ecstasy along the “smuggler’s path” of Tel Aviv-to-Antwerp-to-Amsterdam-to-New York City, or laundering money for Mexican drug cartels. Even more insidiously, the Mossad controls or has controlled enough of the drug trade in southeast Asia and Central America to help fund its own secret operations. Throw in the many key roles Jews have also played in arms and sex trafficking, which Howard underscores to a great extent, and we realize that Zionists, philo-Semites, and other proponents of the status quo have a lot of explaining to do. What are these criminals doing with all these ill-gotten gains?

Scott Howard has written an indispensable book which reveals how ruling elites across the world manipulate and deceive in order to replace all natural and traditional ways of life with a monoracial, centrally-controlled, socialistic dystopia. As a result of Howard’s extensive labor, The Open Society Playbook shines light upon the villains who until now have been operating in the darkness of secrecy. Armed with such knowledge, it is now up to the rest of us to do something about it.

« Our Man in Arkansas