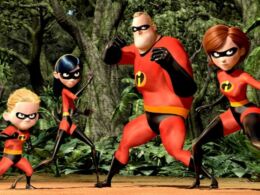 Brad Bird is the director of three classic animated films: The Iron Giant (1999), The Incredibles (2004), and Ratatouille (2007), as well as the blockbuster sequel The Incredibles 2 (2018). The Incredibles is a superhero film that also pays affectionate homage to the spy movies of the 1960s, especially classic Bond. I also classify The Incredibles as a classic of Right-wing cinema because it is explicitly anti-egalitarian and also promotes healthy family values.

Bob Parr is a Nordic bodybuilder who dons cape and mask to fight crime and save lives as the superhero Mr. Incredible. He’s enormously strong and virtually indestructible. His wife Helen is known to the public as the superheroine Elastigirl. Her body is infinitely flexible. She can elongate her limbs or flatten out like a parachute or sail. Their superpowers coincide with traditional masculine and feminine archetypes. He’s hard and brutal. She’s soft and flexible.

The Parrs, however, are forced to hang up their capes when the public turns against superheroes and demands that they be banned. They aren’t banned for being vigilantes, mind you. Instead, they keep getting sued: sued for damages inflicted when they battle supervillains, even sued for saving a suicidal man. A sensible society would indemnify superheroes from such lawsuits, for the greater good. But instead, they are forced to stop helping society. Of course banning superheroes does nothing to deter supervillains, whose activities would inevitably increase without opposition. Before you dismiss the whole premise as absurd, ask yourself how it differs from the “defund the police” movement in major American cities.

The Parrs settle down and have three kids, Violet, Dash, and the baby Jak Jak. Both Violet and Dash have superpowers like their folks. Bob has a boring and alienating job in an insurance company. He’s gotten fat. Helen is a stay-at-home mom. Bob and his black buddy Lucius, also known as the superhero Frozone, go out once a week and listen to a police scanner, hoping to relive the old times by battling evil.

Bob gets fired from the insurance company and approached by a mysterious defense contractor who needs a superhero to subdue a rogue battle robot, the Omnidroid. Bob handily defeats the Omnidroid and is happy to be a hero again. He begins working out and getting his edge back.

Unfortunately, Bob’s mysterious benefactor turns out to be a new supervillain who has been using superheroes as test subjects to refine the Omnidroid. Most of them have been killed in the process. Once the Omnidroid has been perfected, Syndrome plans to unleash it on Metroville, then come to the “rescue” as a new superhero who styles himself “Syndrome.” (The “hero syndrome” refers to a form of manipulative behavior in which a person creates a crisis and then comes to the rescue.)

Fortunately, the whole Parr family comes together to use their superpowers to defeat Syndrome and the Omnidroid. Hence Mr. Incredible, who used to work alone, becomes part of a team, the Incredibles.

The music, mid-century modern design, sets, and gadgets of The Incredibles teem with delightful homages to the spy films of the 1960s. An homage, of course, has to fall short of an outright rip-off. But major plot elements of The Incredibles strike me as an outright rip-off of Watchmen. In both stories, superheroes are forced into retirement, hanker for the old life, and return to it surreptitiously. In both stories, they save people trapped in a burning building. In both stories, the villain does not have superpowers, but he uses technological enhancements to make himself powerful and is willing to share those enhancements with anyone who can pay. Both villains also create crises to achieve their ends. Both stories even share a gag with capes. Brad Bird, however, denies having read Watchmen, a statement that I find . . . incredible.

Not only are Bob and Helen archetypically masculine and feminine characters as superheroes, they also have a traditional family in which Bob works and Helen stays at home to raise their three children. To underscore just how “problematic” this all is from a feminist viewpoint, at the beginning of the film, we see an interview clip with Helen as Elastigirl: “Settle down? Are you kidding? I’m at the top of my game! I’m right up there with the big dogs! Girls, come on. Leave the saving of the world to the men? I don’t think so! I don’t think so.” I guess she just hadn’t met Mr. Incredible yet. And although we can credit the government with forcing Helen out of the superhero profession, there’s nothing stopping her from getting some other kind of job. Are we to conclude she just preferred being a mother?

The Incredibles is most famous, however, for its frankly anti-egalitarian sentiments, and rejection of equality is the dividing line between the Left and the Right. The government has demanded that superheroes stop using their superpowers and fit in with the rest of us. This means that young Dash Parr can’t join the track team, because he is super-fast:

Dash: You always say, “Do your best.” But you don’t really mean it. Why can’t I do the best that I can do?

Helen: Right now, honey, the world just wants us to fit in, and to fit in, we just gotta be like everybody else.

Dash: Dad always said our powers were nothing to be ashamed of. Our powers made us special.

Dash: Which is another way of saying no one is.

Bob is indignant that Dash’s elementary school now has a “graduation” ceremony for passing from the fourth to the fifth grades: “It’s psychotic. They keep creating new ways to celebrate mediocrity, but if someone is genuinely exceptional, then . . .”

Many viewers think that The Incredibles was influenced by Ayn Rand: first, because of the anti-egalitarian sentiments; second, because Ayn Rand herself makes an appearance in the movie as designer Edna Mode, who lives in a hypermodern house with monumental classical Greek décor and smokes cigarettes in a long holder. She’s absolutely hilarious and steals the whole show.

But this is a false inference. Ayn Rand is not the only anti-egalitarian thinker. Moreover, Edna Mode is not based on Ayn Rand but on Edith Head, the great Hollywood designer. (“Edna” is a mashup of “Edith Head,” and “Mode” is French for fashion.) Brad Bird admits that he read Rand when he was young but denies her influence on the film. Moreover, he openly admits to modeling Edna Mode on Edith Head.

Beyond all that, the movie’s philosophy isn’t particularly Randian. The main conflict in the film is between those who are born with special gifts (including knowledge) and those who lack them. As Helen says to her daughter Violet: “You have more power than you realize. Don’t think. And don’t worry. If the time comes, you’ll know what to do. It’s in your blood.” The emphasis on heredity and instinct puts The Incredibles much closer to Nietzsche than Rand.

Ayn Rand, after all, denied that mankind has any inborn knowledge or skills. She was a firm believer in the blank slate, although with a special twist: She believed that the blank slate could inscribe itself, that “man is a being of self-made soul.” (Being one’s own cause [causa sui] is a metaphysical trait usually attributed to God, not man.)

Mr. Incredible: You killed off real heroes so that you could . . . pretend to be one?!

Syndrome: Oh, I’m real. Real enough to defeat you! And I did it without your precious gifts, your oh-so-special powers. I’ll give them heroics. I’ll give them the most spectacular heroics anyone’s ever seen! And when I’m old and I’ve had my fun, I’ll sell my inventions so that everyone can be superheroes. Everyone can be a super! And when everyone’s super . . . no one will be. [evil laughter]

Of course Rand would not endorse Syndrome’s motivations (envy) or actions (murder and mayhem).

The Incredibles really is an incredible film, and not just for kids. It is highly entertaining and often hilarious, with wholesome role models, serious themes, and useful lessons: the traditional family; a clear-cut battle between good and evil; envy, conformity, and democratic leveling versus excellence; the importance of family solidarity; and, above all, no capes. The plot may be derivative, but it is clever, well-paced, and breathes like Egyptian cotton. The dialogue is snappy. The production design and action sequences are dazzling. Michael Giacchino’s soundtrack is a note-perfect fusion of Henry Mancini’s cool sixties jazz and John Barry’s brassy Bond music.

The Incredibles was not just an artistic success. It was also a commercial and critical hit. This created enormous demand for a sequel, which Brad Bird finally delivered in 2018. Sadly, The Incredibles 2 is not incredible, too. It looks great and has many funny episodes, but there’s too much going on here, and it never gels into a compelling or coherent plot. The kids might not notice, but the grownups certainly do.

Bird must have been under enormous pressure by Disney to eliminate the “problematic” elements of the first film. There’s nothing about excellence versus mediocrity here. Mom and dad briefly swap roles — then again, that’s the villain’s doing — but the family structure and norms remain unaltered. Bird could always have pled that his movie is set somewhere in midcentury, before the sexual revolution, although the technology is not always consistent with that. There’s a cynical wine-aunt, but she’s the villain. At a certain point, a whole Tumblr of diversity is dumped into the plot in the form of new superheroes, but they’re mostly villains as well. Despite it all, The Incredibles 2 didn’t end up politically correct. Sadly, though, that’s the only incredible thing about it.