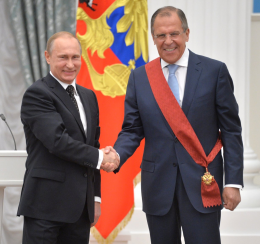 Something remarkable happened last month as a result of the strained relationship between the Biden administration and Vladimir Putin: White people in the United States are now officially recognized as an oppressed people. Their government does not respect their civil rights. Of course, the fact that it’s the Russians saying this — and not the Americans — makes this admission less revolutionary than it should be. But it’s a start. In any event, whites should capitalize on this little news nugget in order to raise the profile of white identity and publicize white displacement and dispossession which, as we all know, is occurring everywhere.

This latest arc in the never-ending US-Russian frost-thaw cycle began on March 17, when Joe Biden referred to Putin as a killer, blamed him, risibly, for attempting to meddle in the 2020 US election, and then promised new sanctions against Russia. The pushback from Putin’s government came quickly, as would be expected. What wasn’t expected — at least by me — was how Putin’s government slapped down the race card. The heretofore never-played white race card.

According to a report by the Moscow Times, Lavrov made the comments during an interview on Russian national television. Lavrov noted that Russia has always supported efforts to “get rid of racism” and has promoted “equal rights of people of any skin color.”

However, he said it was vital “not to switch to the other extreme which we saw during the ‘BLM’ (Black Lives Matter) events and the aggression against white people, white U.S. citizens.” The far-left Black Lives Matter movement has engaged in unprovoked attacks on white people in the United States, citing twisted grounds of racial justice.

He claimed the United States under President Joe Biden was now promoting a “cultural revolution” to spread these cultural Marxist values around the world.

How’s that for some welcome news. Somewhere Jared Taylor is applauding this Lavrov for making a call that finally went whitey’s way. Does anyone even remember the last time it did?

And things didn’t quite end there, either.

The Russian Foreign Ministry has also blasted the Biden administration for persecuting people who disagree with the outcome of the 2020 election. Spokeswoman Maria Zakharova asserted that the FBI has been unfair and abusive in its treatment of January 6 protestors and that the vast majority of these protestors had been peaceful. She also expressed concern that the Biden Administration has not been respecting the “basic human rights” of Trump supporters.

She then leaves us with this peach of a parting shot:

US officials are constantly and hypocritically taking care of these rights when it comes to other countries; and yet, they have no scruples in ignoring them at home.

Of course, we shouldn’t read too much into this. I also have no intention of inserting myself into the geopolitical tit-for-tat going on between Russia and America right now. Nations are known to rattle sabers whenever they feel they are being insufficiently respected. Further, taking diplomats and spokespersons like Lavrov and Zakharova at their word is always a bit dicey given their obvious partisan placement and conflict of interest. It could also be that this Lavrov was naively hitting back at the United States where he thought it would hurt the most. Perhaps he just didn’t realize that sticking up for white people just isn’t done by all the cool kids these days. Then again, he mentioned white people quite deliberately, and twice. He also commented wryly that, “I’ve seen black people play in Shakespeare’s comedies. Only I don’t know when there will be a white Othello.”

Here are a couple of others: In 2018, Lavrov warned of new waves of Syrian immigration which could soon be heading into Western Europe. Yes, this may or may not have been a veiled threat to Western powers looking to undermine Russia’s interests in Syria, but at least Lavrov sees immigration from Syria as a bad thing. He also appears to be fairly based when it comes to the coof, having recently traveled to China on official business and wearing a mask that reads, in English, “FCKNG QRNTN.” 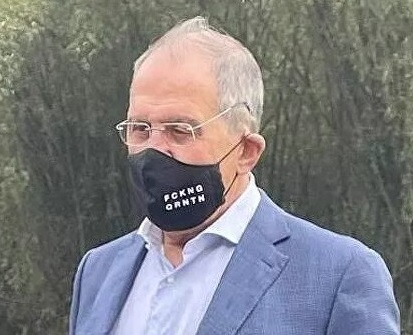 So here we have a politician who’s not afraid to ruffle a few politically correct feathers. The Trump of Tbilisi? The Don Donald? As far as we know, Putin hasn’t fired him yet, so maybe this is the Caucasian Sensation we’ve all been waiting for (according to Infogalactic, Lavrov is half-Armenian, half-Russian). Maybe his pro-white attitude isn’t a fluke. Maybe the Russians are beginning to figure out what we’ve known for a long time: that whites in the West are being increasingly defamed, stigmatized, and oppressed by the power-ravenous anti-white Left. But whether they know this or not, we know this. White advocates everywhere should be trumpeting this information across all the social media platforms we still have access to.

You get the point.

Whether he realizes it or not, Sergei Lavrov has given white advocates a nice opportunity to say what we’ve always been saying, but now with the imprimatur of not only a dignified Russian diplomat but Putin’s entire government as well. Maybe not the most reputable witnesses in the world, but witnesses nonetheless and none too bad for all that. And who gets to choose their witnesses, anyway?

It’s sad to think that presenting unambiguous anti-white racism isn’t enough to change minds these days, especially those of other whites. But when you have corroborating testimony from foreign dignitaries, it makes changing minds just a little bit easier. This means that the woke contingent at the family gathering doesn’t merely have to refute that one eccentric relative in the MAGA hat who secretly identifies as white, but the entire Russian government as well. A much more daunting task.

One final observation: Taking race out of the equation, we should not overlook Lavrov’s other warning — that Biden and other Leftists are trying to implement a Marxist “cultural revolution” across the globe. Sound familiar? For Russians, it’s probably ringing a bell or two, given how the last cultural revolution cost them tens of millions of lives and plunged many more into misery for seventy years. That does kind of stick in one’s craw after a while.

Yeah, I know. Lavrov and Putin are former commies. As world leaders, they are partisan, they have a conflict of interest, they can’t be trusted, et cetera. Then again, who can be trusted? The Biden Administration? The people who stole the 2020 election? The Leftist mainstream media? American social media oligarchs who commit acts of gross censorship against anyone who challenges their narrative?

Against these lying, anti-white hypocrites, I’ll side with the Russians any day.