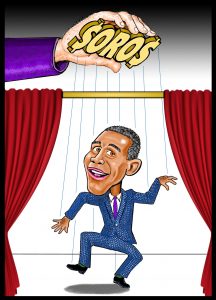 And yet the harder that white Americans try to appease blacks, blacks act less and less appeased.

While campaigning for the presidency in 2008, Barack Obama made a point of mentioning that he was black and that some people wouldn’t like the fact that he’s black. What he never acknowledged was that the only reason he was elected president in the first place was because he’s black.

Actually, Obama’s a mixed-breed mud-puppy born to a white mom and raised exclusively by whites, but he checked off “black” on the census form, which should tell you exactly how thankful he was to the only side of his family that didn’t abandon him.

In a recent podcast interview with two mentally handicapped black rappers — because, let’s face it, who’s more equipped to press a former president on matters of public policy than rappers are? — Obama repeated the provable lie that Republicans reach out to white people, when the fact is that Republicans are extremely careful never to mention white people by name:

What’s always interesting to me, is the degree to which we’ve created, you’ve seen created, in Republican politics, this sense that white males are victims. They’re the ones who are like under attack, which doesn’t jive [sic] with both history and data, and economics. . . . And the story that they’re hearing from Fox News and Rush Limbaugh and, in some cases, inside their churches, is that Democrats don’t believe in Christmas, only care about minorities and Black folks and are trying to take your stuff and trying to take your guns away. . . . The good news for me was I was very confident in what I had done for Black folks because I have the statistics to prove it.

Thanks for the hot take, Barack. What’s interesting to me about what you just said are two things:

As further anti-riot ransom money, the incoming Biden Administration is filling its economic posts “With Experts on Systemic Racism.” Since blacks have a historical record of impoverishing every place on the freakin’ planet that they plant their toes, what could possibly go wrong with such a plan?

Of course, it’s just like an extremely white person such as myself to ignore the fact that educational disparities based on systemic racism are the driving force behind that fact that all across the world, no matter who’s devising the intelligence tests, black people wind up on the shit end of the stick.

They never seem to consider the idea that maybe the problem isn’t education — it’s educability. And maybe the teachers aren’t awful, but a lot of the students are.

People who squirm to blame everyone besides black people for black people’s never-ending problems seemed to think everything would go fine and dandy once our nation’s schools were integrated and innate black scholarship could finally flap its gilded wings. Yet, a half-century after America’s public schools were integrated by force, they remain as segregated as ever. This is blamed on “white flight” and “white racism” rather than the basic notion that white people — at least modern ones, who are starkly different than their ancestors — tend to flee when black people start beating the shit out of them. So now you have the Black School Board President of New Orleans lamenting that “We have work still left to do,” which is what every shady activist says before holding out his hand and demanding more money.

At least white parents — the ones who aren’t willing to offer up their children as sacrificial lambs for the sake of diversity — are starting to notice that something’s rotten.

Former Fox News anchor Megyn Kelly, who is so white that looking at her for more than a minute might render you snow-blind, recently vowed to remove her squeaky-white children from their New York City school after receiving a letter from a “public educator” named Nahliah Webber that contained the following passages:

There is a killer cop sitting in every school where white children learn. . . . They gleefully soak in their whitewashed history that downplays the holocaust of indigenous native peoples and Africans in the Americas. . . . They happily believe their all-white spaces exist as a matter of personal effort and willingly use violence against black bodies to keep those spaces white . . . white children are left unchecked and unbothered in their schools, homes, and communities to join, advance, and protect systems that take away black life. . . . I am tired of white people reveling in their state-sanctioned depravity, snuffing out black life with no consequences. . . . Where’s the urgency for school reform for white kids being indoctrinated in black death and protected from the consequences . . . ? Where are the national conferences, white papers, and policy positions on the pathology of whiteness in school . . . ? This time, if you really want to make a difference in black lives, and not have to protest this shit again, go reform white kids. Because that’s where the problem is — with white children being raised from infancy to violate black bodies with no remorse or accountability.

Sure, let’s forget about who is statistically “snuffing out black life.” But hey, “Nahliah” — where are the national conferences, white papers, and policy positions on black crime and black IQ?

San Francisco’s Lowell High School — a merit-based institution that relies on test scores and therefore features a student body that is 61% Asian — was recently instructed to abandon the racist test scores and instead admit students on a lottery-based system.

At a meeting between parents and administrators, a hilarious kerfuffle erupted between Asian parents and black parents that included the following golden nuggets:

Black Parent: “Black people can’t catch up technologically because the ‘stupid Asians’ are keeping black people down out of fear they’d be overtaken.”

Although my observations suggest that Asians are no friends to white people and tend to view them as intellectually inferior smelly albino apes, I admire these big-brained/low-T diminutive slants for standing up for their own children. Merely by dint of being Asian, they are wrecking the whole dumb narrative of black oppression. Boston school officials recently lamented that the racial demographics of their STEM schools are “too white and too Asian and they’re both meeting or exceeding expectations at higher rates” than blacks and Hispanics. New York City’s oil-drilling Mayor Bill de Blasio says he plans to remove race-blind admissions at two high-ranking NYC high schools, blaming “white supremacy” for the fact that, er, both schools were over 60% Asian.

With no advocates in the media, government, or academia, it shouldn’t surprise anyone that many whites are despondent. It’s been estimated that the current opioid crisis has taken nearly a half-million lives, most of them white, which is nearly as many white lives that perished in the Civil War. Many suspect that this is a deliberate program of pacification and annihilation. The Sackler family — whom many would see as white but who I doubt see many white people as Jewish — have been one of the primary drivers of this crisis by pushing OxyContin on the American public for nearly two decades now.

Despite the fact that the Sacklers, through their pill-pushing mega-corporation Purdue Pharma, pleaded guilty in 2007 to lying about OxyContin’s addictiveness, they forged ahead shamelessly as America’s preeminent smack dealers by maximizing profits through spraying the heartland with painkillers that kill people. Last Tuesday, Purdue Pharma pleaded guilty to three criminal charges.

As part of a plea arrangement, the Sacklers agreed to pay $225 million to resolve civil liabilities — which is only about 2% of the total money they made through OxyContin sales.

In other news, opiate addict George Floyd is an honorary Holocaust victim and “Western Culture Originated With Rape and Murder,” so every last vestige of Greek and Roman antiquity needs to be erased.

Although this week was horrific, I have a nagging feeling that next week will be a drag, Pops, a king-size bust by comparison.

And no one hopes I’m wrong more than I do.