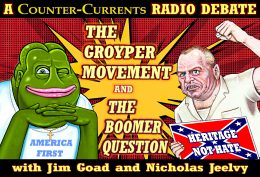 On this episode of Counter-Currents Radio, Greg Johnson is joined by Nicholas R. Jeelvy and Jim Goad to discuss the “Boomer” question, the Gryoper movement, and your questions.

« Ruuben Kaalep on the Intermarium

» Meet The Whites Who Voted Against Trump